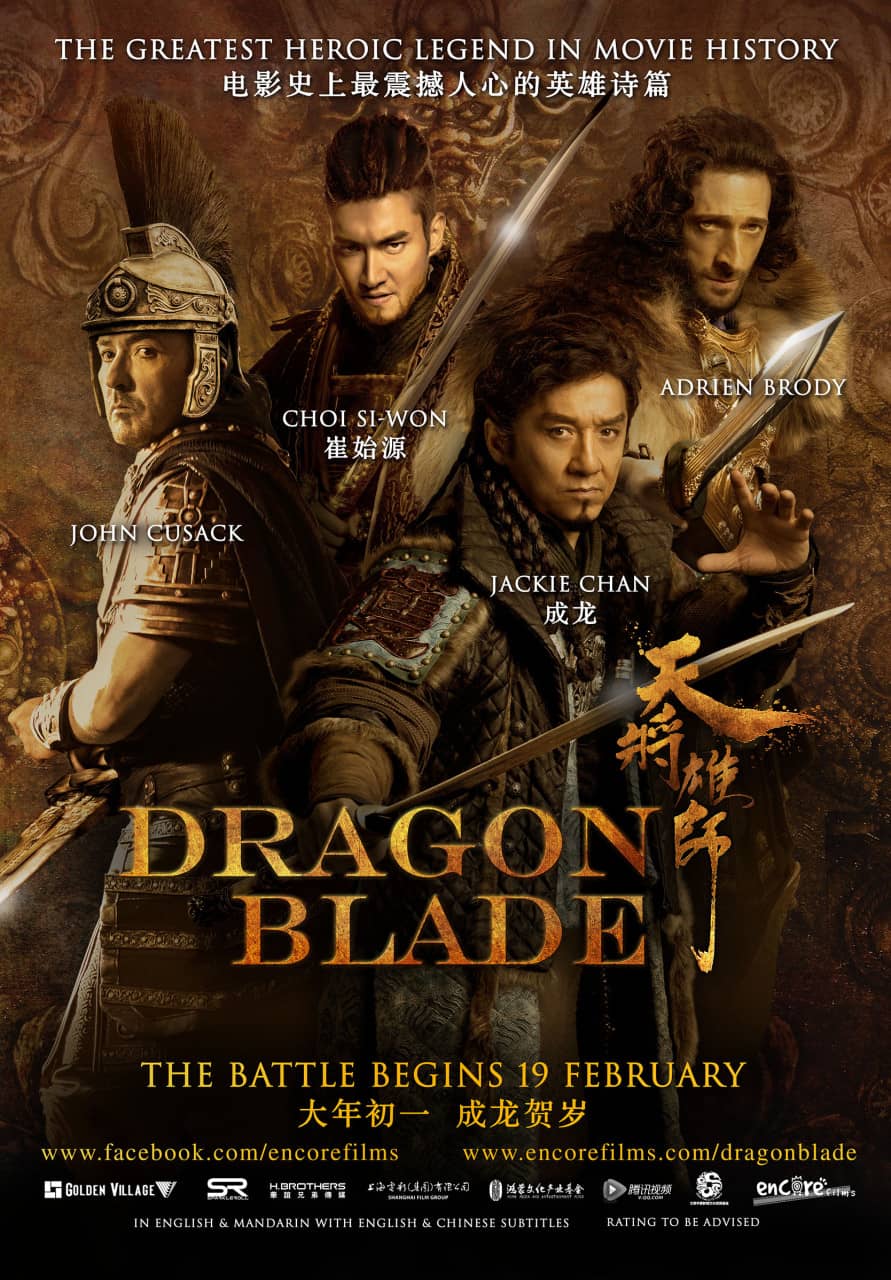 Chinese New Year movie season is here again and to usher in the Year of the Goat, Jackie Chan takes us on a cross-cultural journey down the Silk Road. In this historical action epic, Chan plays Huo An, commander of the Protection Squad of the Western Regions – a Han Dynasty CHiPs of sorts. Framed for treason, he is sent to a labour camp on the outskirts of China, where he crosses paths with Roman general Lucius (Cusack). Lucius is being pursued by the cruel Tiberius (Brody) who, having killed his father and poisoned his young brother Publius (Waite), wants the 36 districts around the Silk Road to bow to him. Huo An and Lucius form an unlikely alliance against the tyrant, choosing unity over discord as numerous armies gather in the desert to face off. 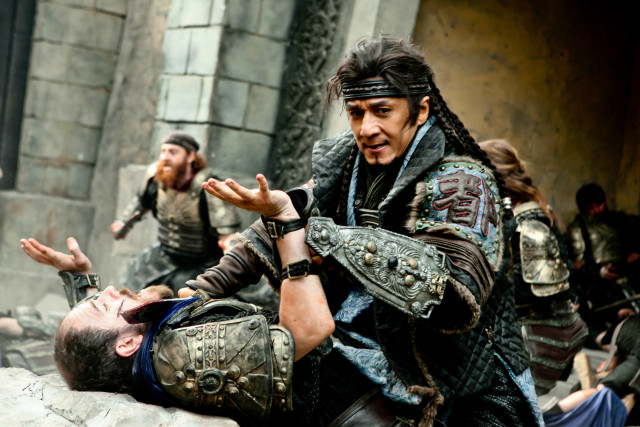 Dragon Blade begins with a proclamation that it is based on a true story – it’s based more on fanciful conjecture than anything else. The premise requires heaps of suspension of disbelief to swallow but over the course of the film, most anyone would find it hard to suspend their disbelief. Many viewers might in fact become best friends with their disbelief. Writer-director Daniel Lee has delivered an uproarious celebration of unintentional hilarity. With a USD $65 million budget, the most expensive film production in the history of Chinese cinema is an extravagant, ill-conceived mess. While the costumes designed by Thomas Chong are meticulously crafted and shooting on location in the vast expanses of the Gobi Desert on grand sets lends the picture sufficient production value, this does little to give weight to the hokey story and generally terrible performances. A 15-minute stretch of the film in which Lucius’ and Huo An’s men put aside their differences to collaborate on an ambitious construction project feels like the plot is being put on hold, until one realises that is supposed to be the plot. 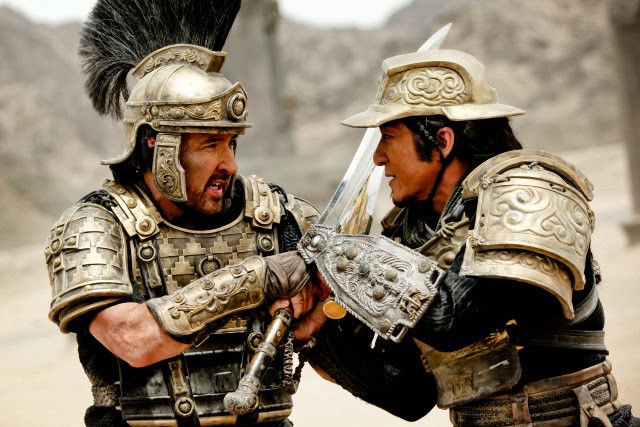 Upon first meeting Lucius, Huo An asks “is there any way no fight?” Let’s break this down: the Romans all speak English – fine, it’s hardly the first movie to do that. Huo An is supposed to have somehow learned English and his halting command of the language is meant to establish a communication barrier. That’s iffy. Finally, the Romans are all shown singing in Latin. Then again, would Jackie Chan mangling Latin dialogue be any better? Because the proceedings are so melodramatic and possess no real tension or weight, this reviewer decided it was more fulfilling to decipher the logic behind why anyone in this movie speaks the way they do. Later on, Huo An gets to deliver the gem of a line “you look down on human”, as if extra-terrestrial invaders have entered the fray – which might as well be the case, given how ridiculous the plot already is anyway. 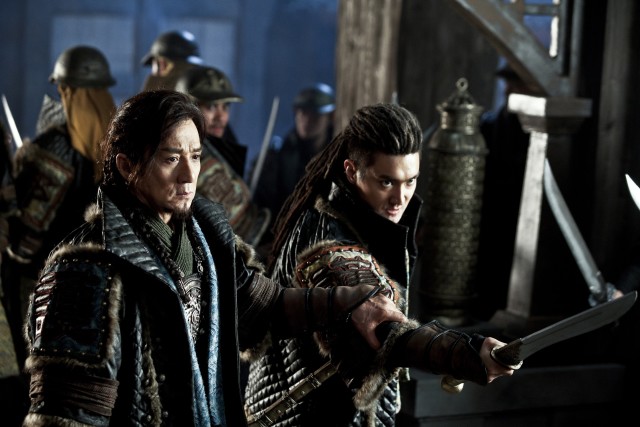 Judging from interviews, career choices and his philantrophy, Jackie Chan views himself as a beacon of understanding between cultures and indeed, most of his movies can be enjoyed by anyone regardless of cultural background, the controversy surrounding Chan’s personal politics notwithstanding. Here, this translates into an awkward preachiness, the film’s heavy-handed message of joining hands and singing “kumbaya” around the campfire coming off as equal parts simplistic and pretentious. Huo An is a stoic leader with a tragic past – while Jackie Chan has excelled at more serious roles before, that is clearly not his forte. Points for trying something different and while he still excels at the sword-fighting sequences, he seems ill-suited to the part and his signature childlike playfulness and unique approach to screen fighting is sorely missed. 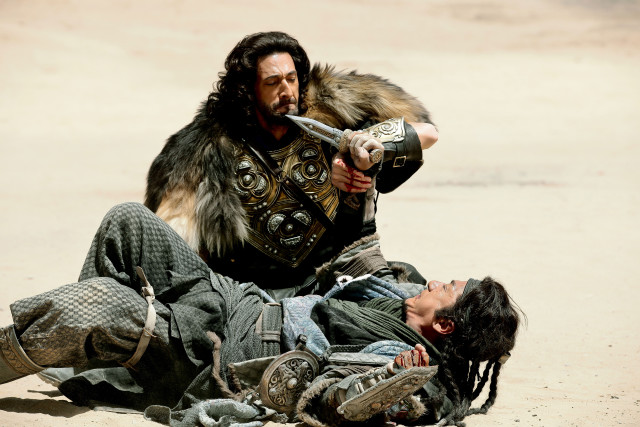 After decades of Asian actors struggling to cross over into the American film market, it seems high time we get more Hollywood actors floundering about in Asian movies. John Cusack truly looks like he doesn’t want to be there – he famously divides the projects he chooses into “one for them” and “one for me” and it’s plenty obvious which category Dragon Blade falls into. Adrien Brody doesn’t do much for most of the film, looking off into the distance, whisper-snarling and issuing threats in menacing tones. While Brody has done some good work in smaller films as of late, he still very much is the “Oscar Curse” incarnate. Here’s it’s painfully clear that playing a scary Ancient Roman villain, ala Joaquin Phoenix in Gladiator, isn’t for everyone. As the young prince Publius, Jozef Waite delivers one of the most awkward, stilted performances we’ve seen from a child actor in recent memory. 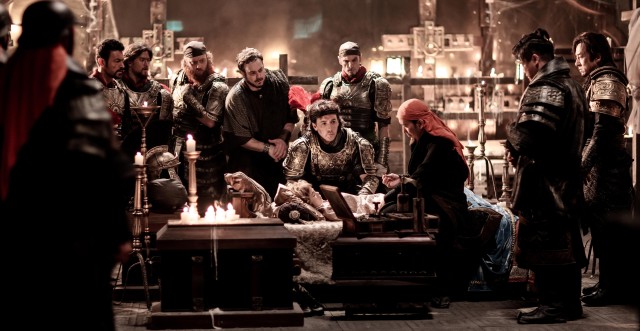 Bad movies are a denarius a dozen. Movies that are bad in as fascinating and novel a way as this one is are rarer. Sitting through Dragon Blade was the most fun this reviewer has had in a theatre in ages, many moments sure to elicit howls from audiences. From the superfluous framing story featuring Vanness Wu as an archaeologist to the United Colours of Benetton moral to the most eclectic cast of the year (which manages to fit in a Korean pop idol, a French singer, a China-based British child star and an Oscar winner), Dragon Blade is nothing if not entertainingly bizarre. It may only be February, but we’re calling this the funniest comedy of 2015. 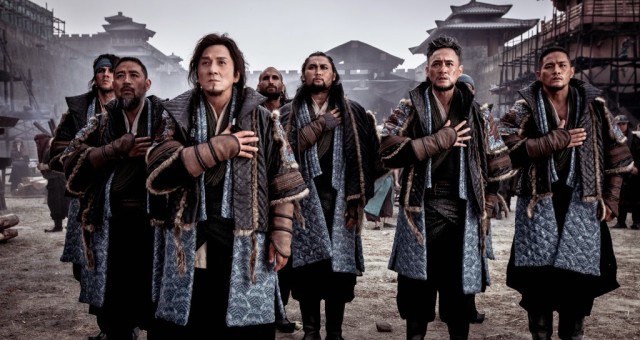 Summary: A “so bad it’s good” novelty in the extreme, Dragon Blade is a baffling cross-cultural mishmash that has to be seen to be believed. Highly recommended in the most ironic sense.