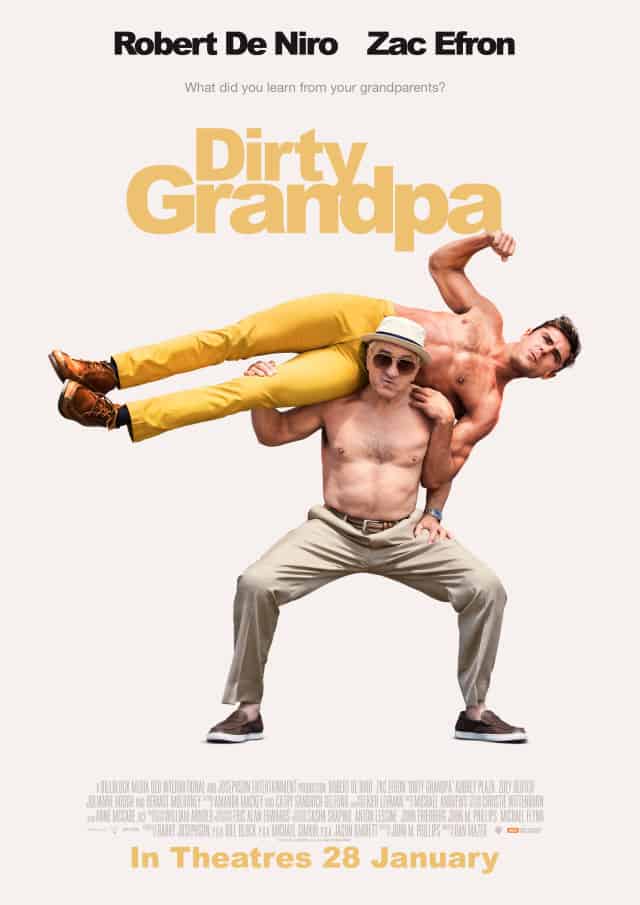 You mess with the bull, you get the horns, and Robert De Niro’s a pretty darn horny (r)aging bull in this comedy. De Niro plays Dick Kelly, a retired army veteran who’s ready to let loose after his wife of 40 years passes away. Dick cons his grandson, Jason (Efron), a strait-laced corporate lawyer at his dad David’s (Mulroney) firm, to drive Dick down to Daytona Beach for spring break. Jason is getting married next weekend and his fiancé Meredith (Hough) is constantly haranguing him about the wedding planning details. While dragged on a drunken, drug-fuelled rampage through Daytona Beach by his grandpa, Jason finds himself drawn to former classmate Shadia (Deutch). Dick has lascivious designs on Shadia’s friend, Lenore (Plaza) – designs that Lenore is more than happy to oblige. Over the course of their misadventures, which include running afoul of the police and a local gang, some unlikely grandfather-grandson bonding unfolds.

It’s pretty much all there in the title, Dirty Grandpa – this is a comedy built on the premise of a septuagenarian behaving badly. It’s hardly the first movie mining comedy from a dirty old man partying down; it’s practically impossible not to think of 2013’s Jackass Presents: Bad Grandpa on hearing the title ‘Dirty Grandpa’. The jokes pretty much write themselves, and because of its predictability and heavy reliance on one-dimensional stock characters, Dirty Grandpa comes off as lazy and limp rather than raucously shocking. The moment certain characters show up, it feels like we’re supposed to be filling out a bingo card. “There’s the fiancée with arms akimbo, there’s the friendly local merchant who’s really a drug dealer and there’s the old army buddy who’s wasting away in a nursing home. Bingo!” 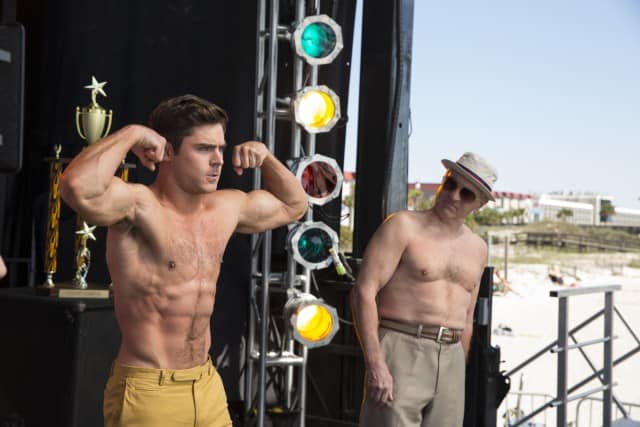 It’s somewhat funny that De Niro and Efron are playing grandfather and grandson here, since Efron’s character in Bad Neighbours threw a De Niro-themed costumed party, dressing up as Travis Bickle. Neither De Niro nor Efron is terrible in the leading roles, mostly because there just isn’t any nuance and they don’t have to stretch themselves at all. Beating out Michael Douglas and Jeff Bridges to the title role, De Niro does seem believably crass and grizzled, but it’s difficult to laugh along and cheer the character on when he’s as sociopathic as he is. We’re meant to root for Jason to loosen up and be less of a square, but what his grandpa seems intent on doing is essentially unravelling his whole life. It’s the day after his wife has died, and Dick exclaims, “I want to f*** f*** f*** f***!” while air-thrusting. That’s not a character who’s “endearingly debauched” or deserving of the audience’s sympathy. Also, show us a guy that has Efron’s physique who is this stereotypically uptight and that fond of sweater vests.

The moment Hough’s Meredith shows up bugging Jason about the colour of his tie for the wedding rehearsal lunch and similar minutiae, it’s obvious that we’re meant to root for the couple to break up before the end of the film. Sure enough, a rival for Jason’s affections arrives in the form of Deutch’s Shadia, a conservationist who hangs out with hippies. Deutch’s ethereal beauty suits the role and an awkward/romantic karaoke duet will bring on the High School Musical flashbacks big-time. While Plaza is better known for her droll, sardonic humour, she’s still pretty funny as the overtly libidinous, promiscuous Lenore, who it seems will stop at nothing to sleep with Dick. The thought of Aubrey Plaza and Robert De Niro getting it on is supposed to be so knee-slappingly hilarious that a disproportionate number of jokes are derived from it. It’s not “gross, ha ha!”; it’s just “gross”. 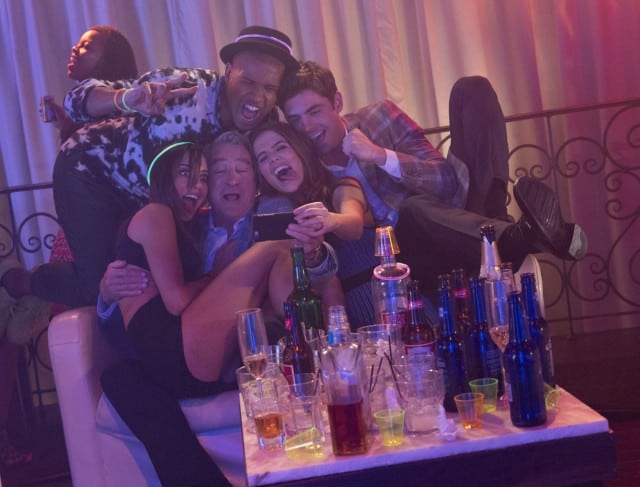 Dirty Grandpa lives up to its title in that seeing De Niro drool over college-aged girls for two hours might well make you want to take a long shower. Even then, it doesn’t push the boundaries of R-rated comedy – there’s nothing inventively out there or that hasn’t been done by similar movies before. By the time the sappy acoustic guitar music plays as Dick and his grandson have a heartfelt chat about Dick’s mortality, Dirty Grandpa certainly hasn’t earned the right to try pulling on any heartstrings.

Summary: Crass, tired and always going for the most obvious joke, Dirty Grandpa is an old dog desperately in need of learning some new tricks.