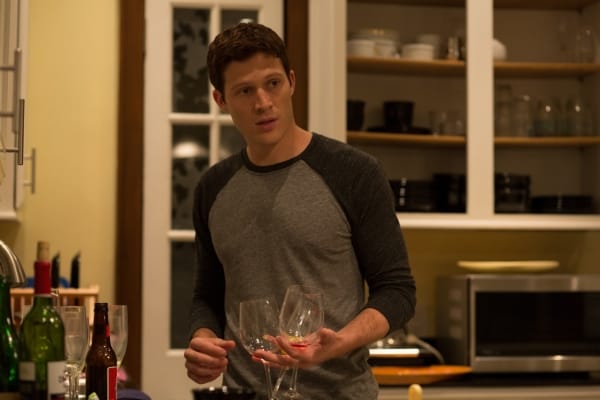 During its four seasons, he became a series favourite, and managed to parlay the exposure into both film and television work. He starred in the 2009 romantic comedy Post Grad opposite Alexis Bledel and Michael Keaton, and with Emmy Rossum in the drama Dare. On television, he was a series regular in Off The Map, produced by Scandal/Grey`s Anatomy/Private Practice producer Jenna Bans, and in Fox`s medical drama The Mob Doctor.

Now he`s back on the big screen working with first time feature directors Radio Silence in the horror drama Devil`s Due, a contemporary take on the Rosemary`s Baby horror story. As the newlywed Zach McCall, his life is turned upside down when his bride`s unexpected pregnancy may be the devil`s work, with each twist and turn captured on â€˜home` video. Once he`d seen a few pages of the script, he knew he wanted to take part.

â€œI got given a couple of scenes and I went in with all the guys from Radio Silence and the producers and I really liked them a lot, he says. â€œThey talked me through what the script was going to be, and I got to see the Radio Silence segment from V/H/S, and they just seemed cool and fun to work with. Going in, you think it`s either going to work and be scary or it`s going to not work: you have to roll the dice and take that risk. But based on everything they were telling me and the vibe I had for them, it seemed like it was worth doing.

Did you know beforehand who Radio Silence were?

Just from V/H/S, and I was confused at first. It says `directed by` and it had four guys` names there! You`re like, `What?`

How does that even work?

Well you don`t want to go in saying, `OK, who`s the director, what`s going on here?` You want to play it cool and try and suss out if one of them is the actual director. You`re playing this weird game where you`re trying to act real savvy when you`ve no idea what`s going on. But they`re all awesome guys and it was even clear during the audition process that they all work together; giving notes and suggestions – and they were all good suggestions and clear. Sometimes directors get very esoteric – these guys were really easy to work with and it was a lot of fun. The way they work together as a group is pretty amazing – I never saw a single ego throughout the whole process, and they trust each other: if it`s three against one, the one person just shuts up and goes with it.

Bearing in mind the route these guys had taken to helm a movie, was there any reservation on your part about their experience and on your getting involved?

Not at all. I`ve worked with a lot of first time directors before and sometimes it works out amazing and is a pleasure, and other times it`s an awful experience. You never really know, but these guys had a lot of work you could look at and I think it`s so cool the way they`ve gotten to where they are. It`s so easy to make a movie now and just put it online – I tell students who ask me, â€˜Just do it.` That`s exactly how these guys got to where they are – they just started shooting stuff together and made good stuff. Fox found them and asked them to make a movie.

Do you think similar rules apply for actors – just make stuff and get it online?

I think it does but it`s a different route. It`s better than just putting out your headshot to a bunch of agencies. On top of that, whether your work is seen or not, you`re doing something. You`re on some sort of set and learning to work it as opposed to sitting in an acting class.

What did you think of the Radio Silence and Chad, Matt & Rob YouTube movies?

I thought they were fun. Some are better than others, but you definitely can tell these guys were enjoying what they were doing and are not jaded and they`re excited to be doing it. Even over the course of this movie, they would always take a second and look around and start laughing… they were so thankful to be doing what they were doing. There`s no sense of entitlement – every step of the way they were like, `I can`t believe we get to do this!` Which is how I like to approach my work as well.

This style of point of view (POV) movie… were you familiar with it and a fan?

I`m definitely familiar with it and, again, some are good, some seem like a gimmick. The thing for us throughout the shoot was trying to make it realistic, where you`re not going to be watching it going, `Why is this guy filming right now?`  So we found this way to justify it: early on in the movie a friend gives me this clip-on camera for our wedding, so later on when crazy shit`s going on it makes sense that I try and get proof by using it. That way my character doesn`t have to run around with a camera in his hand and we buy that things are being filmed. I was very happy that we were conscious of not making things seem forced.

I think Chronicle did it well. It starts with the dude filming things and then he gets superpowers where he can make the camera float. After that they were able to get these cool shots – they`re crane shots, but you buy it. We couldn`t do anything that creative, but we tried to come up with ways to play with the style.