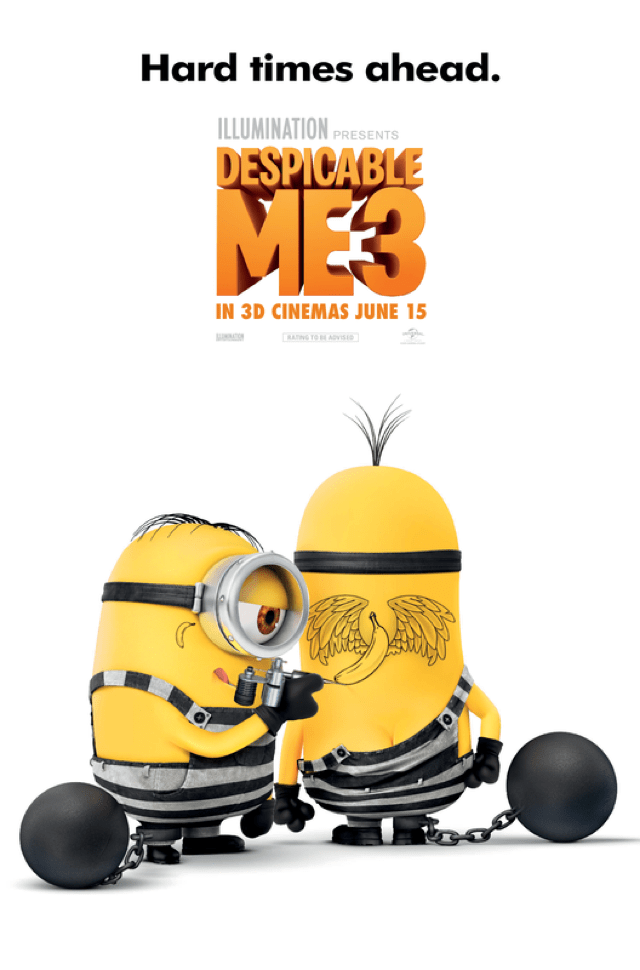 Supervillain-turned-doting-dad Gru (Carell) is back, with his wife Lucy (Wiig), adopted daughters Margo (Cosgrove), Edith (Gaier) and Agnes (Scharrel), and yes, the Minions (Coffin) in tow. In this instalment, Gru and Lucy face off against Balthazar Bratt (Parker), a dastardly, bitter former child star with an 80s pop culture and fashion gimmick. Gru faces upheaval when Valerie Da Vinci (Slate), the new chief of the Anti-Villain League, unceremoniously fires both Gru and Lucy. The Minions, longing for the glory days of being on the wrong side of the law, revolt and leave Gru’s employ. During all this, Gru discovers a secret that his mother Marlena (Andrews) has been keeping from him for his entire life: Gru has a twin brother. Gru finally meets Dru (also Carell), who is eager to join his brother on his exploits and attempts to convince Gru to carry on the proud family legacy of villainy. Gru and Dru embark on a quest to steal back a priceless diamond from Balthazar, as Balthazar plots his revenge on the town that scorned him: Hollywood.

We’ll be upfront about it: Despicable Me 3 wasn’t exactly high on our list of summer movies we were looking forward to. One is likely to find more people who are annoyed by the Minions than who find them adorable, but it’s not just that. The first Despicable Me film was weird, inventive, subversive and full of heart. At that point, Illumination Entertainment was still an underdog. Now, with a string of box office successes under its belt, not to mention tons of Minions merchandise and even theme park rides, it all seems to have gone to the heads of producer Chris Meledandri and the other Illumination bigwigs. The studio appears to be heading down the Dreamworks path, and Meledandri has been instated as Universal’s equivalent to Disney/Pixar’s John Lasseter. Early in Despicable Me 3, we get a particularly mean-spirited swipe at Finding Nemo. This can’t help but recall the sly, slightly bitter digs at Disney that were snuck into the Shrek movies.

Kids in general are unlikely to care about animation studios jostling for supremacy, and kids in general are likely to enjoy Despicable Me 3. The animation is energetic, the gizmos and gadgets on display are over-the-top and imaginative, and there is so much slapstick. The main issue here is that the film isn’t character-driven at all. In the first film, the blossoming relationship between Gru and his young charges served as the film’s emotional core. Then, the Minions became the toyetic marketing sensation they are, and that got pushed to the background. One can sense directors Coffin (who also voices all the Minions), Balda and Guillon struggling with the question “how much of the Minions is too much?” For most of this film, the Minions are separated from Gru, accidentally entering a singing competition and then getting tossed into prison, where they spoof Jailhouse Rock. It’s all gag-driven, and there are several genuinely funny jokes here, but it ends up being scattershot.

“Long-lost twin brother” is a plot device screenwriters truck out when they’re all out of ideas. In this case, there’s an attempt to wink and nod at how it’s a bit of a cheat, but there’s still not enough to justify going this route. Carell gets to try a slightly different, higher-pitched voice as the irrepressibly cheerful Dru, and for all of five seconds, it’s funny that Dru has lustrous blonde locks, while Gru is bald. Despicable Me 3 tries for an emotional arc with Lucy struggling in her position as the girls’ adoptive mother, clashing with Margo in particular. While it’s an attempt to add depth to the story, it doesn’t become much more than just an attempt, and the conflict is resolved too easily.

Parker, along with South Park co-creator Matt Stone, has long been the gatekeeper of offending everyone for the sake of comedy. Parker and Stone have been especially savage towards what they view as the Hollywood elites, who will stop at nothing for a quick buck. As such, it seems like a sell-out move for Parker to take a role in the Despicable Me franchise, but the character is amusing. A delusional former child actor who obsessively grasps at the remains of his glory days is a familiar archetype, but the 80s gimmick is enjoyably silly. There are perhaps one too many snippets of songs from the era, including Take on Me, Bad, Sussudio and Physical, though.

There exist more desperate examples of attempts to keep floundering franchises afloat, and there’s still enough wit on display in Despicable Me 3. However, parents are likely to get increasingly impatient with these movies as more and more get made, when there are other animated films out there that older viewers will get more out of.

Summary: If Minions make you miserable, you don’t need us to tell you to give Despicable Me 3 a wide berth. There’s more emphasis on sustaining a lucrative franchise, less heart, and more animated zaniness to amuse the kids and annoy the adults.