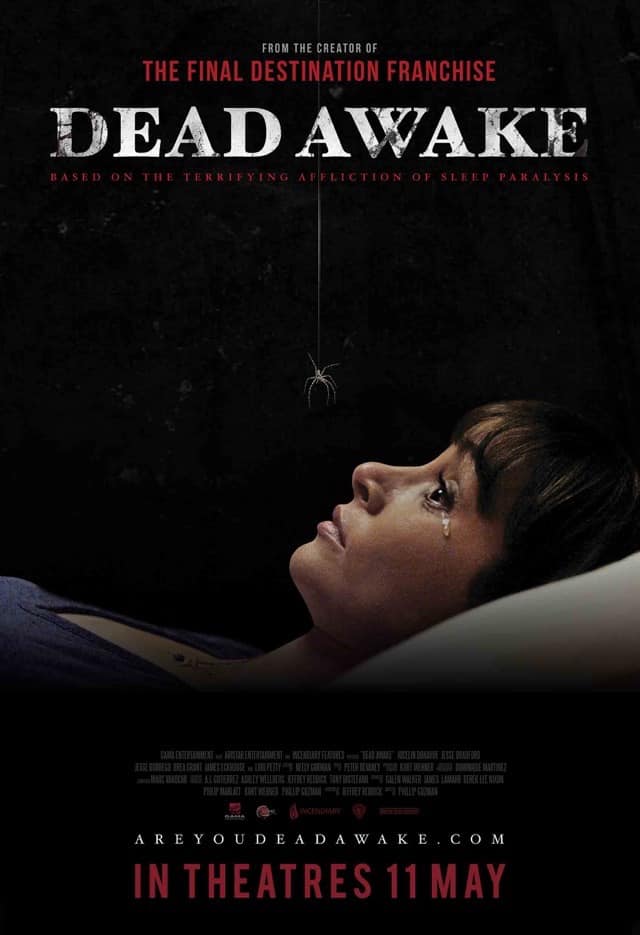 The heroes of this horror movie have something to get off their chests – that something is a supernatural entity known as the Night Hag. Beth Bowman (Donahue) is recovering from a substance abuse problem and has been experiencing night terrors. Beth’s boyfriend Evan (Bradford) and Beth’s twin sister Kate (also Donahue) try to get to the bottom of this, uncovering a string of mysterious incidents in which perfectly healthy people die suddenly in their sleep. While Dr. Sykes (Petty), an expert in sleep science, assures Beth and Kate that sleep paralysis is completely normal and harmless, the sisters aren’t so sure. Their search for answers takes them to the eccentric Hassan Davies (Borrego), who believes that sleep paralysis is caused by a ghoulish being who sits on people’s chests and suffocates them while they’re caught between sleep and wakefulness. Kate must confront her own demons as she attempts to defeat an eons-old evil. 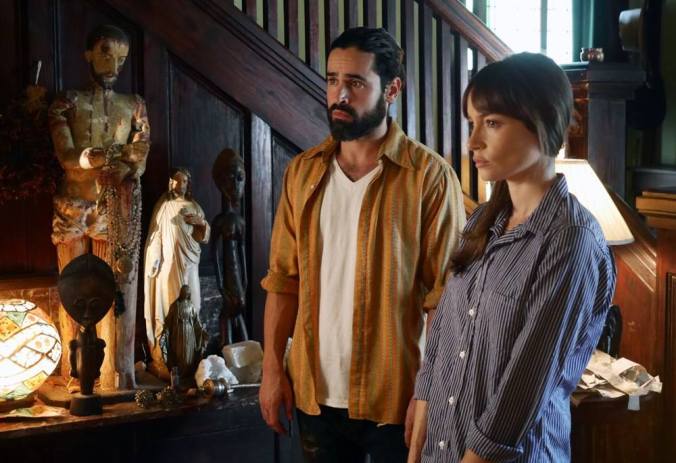 Dead Awake is helmed by Texan director Phillip Guzman, and written by Jeffrey Reddick. Reddick wrote the original draft of Final Destination, and has been a long-time fan of the A Nightmare on Elm Street series. At 14, he wrote a treatment for a prequel to A Nightmare on Elm Street, which eventually landed him a job as assistant to New Line Cinema boss Robert Shaye. It stands to reason that Reddick would want to create his own sleep-centric horror series, as the phenomenon of sleep paralysis is a spooky one indeed. In Dead Awake, we are presented with the rational explanation for seemingly unexplainable deaths, before the horrifying, supernatural truth is unveiled. The problem is, Dead Awake spends far too much time explaining what sleep paralysis is, when it’s a simple concept to grasp.

One would expect the writer of Final Destination to, at the very least, devise some creative deaths. Dead Awake is cripplingly repetitive, in that there’s really only one way the Night Hag can kill – crawl onto her victims and suffocate them as they are helpless to fight back. The Night Hag is far from a distinctive movie monster, and lacks the personality that defines, say, Freddy Krueger from the Nightmare films. It’s a generic design, and the physicality of the Night Hag, who drags herself across the floor and makes jittery movements, isn’t particularly fresh either. The film’s best scene, which depicts the horrifying extent one man goes to in order to stay awake, doesn’t even feature the Night Hag.

Donahue, whom horror fans might recognise from House of the Devil and Insidious: Chapter 2, plays the dual roles of twin sisters. The film uses lo-fi techniques such as clever framing and body doubles to achieve the illusion, but it isn’t as seamless as in some other films in which one actor plays twins.

Dead Awake tries but fails to fully exploit a premise that’s inherently disturbing sleep paralysis could happen to anybody, and has happened to many, including this reviewer. After watching Dead Awake, one should be terrified to shut one’s eyes, even for a moment. The film doesn’t burrow deep enough under one’s skin, and instead of giving the phenomenon a terrifying new dimension, instead takes away its mystique by offering a pat answer as to why sleep paralysis happens.