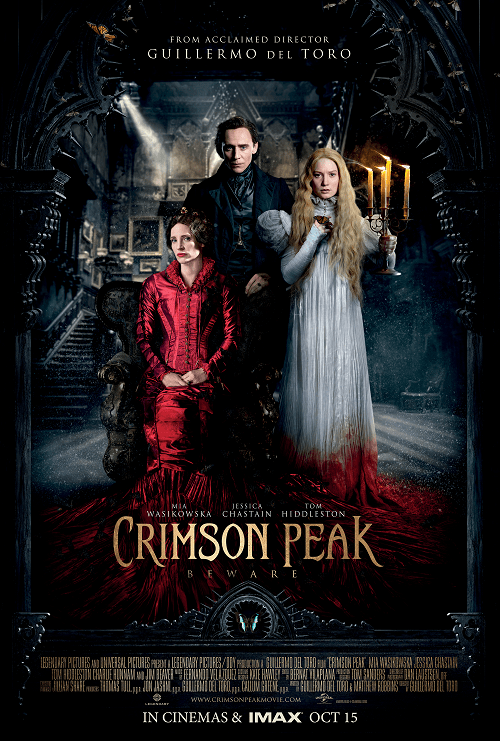 Guillermo del Toro beckons you to enter Allerdale Hall. Dare you step through its foreboding gates? In this period horror flick, Mia Wasikowska plays Edith Cushing, a young author who falls headlong in love with a mysterious stranger, Sir Thomas Sharpe (Hiddleston). Sir Thomas comes from Cumberland, England to Buffalo, New York, accompanied by his sister Lady Lucille Sharpe (Chastain). After the tragic and sudden death of her father Carter (Beaver), Edith marries Thomas, while her childhood friend, Dr. Alan McMichael (Hunnam), continues to harbour feelings for her. Alan begins to suspect that there is more to the siblings than meets the eye, as Edith is spirited away to Allerdale Hall, the ancestral home of Thomas and Lucille. Situated atop a clay mine, the mansion has fallen into disrepair, its walls hiding restless spirits and arcane secrets. Our heroine must unearth the mysteries buried in Allerdale Hall before it devours her whole. 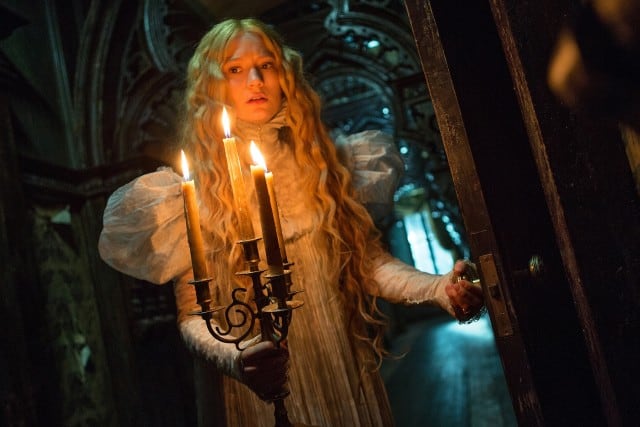 Director Guillermo del Toro has said that, following the rough time he had making Mimic, he reserves his lyrical macabre fantasy horrors for his Spanish-language films, with most of his English-language movies being more accessible blockbusters. After cultivating a good working relationship with Legendary Pictures’ head honchos after Pacific Rim, del Toro was allowed to unleash his dark imagination in a big Hollywood movie with Crimson Peak. These days, horror movies seem to be predominantly low-budget affairs, with found-footage movies proving especially popular with studios. Blumhouse has cornered the market with the Paranormal Activity franchise and its ilk. There is nothing inherently wrong with low-budget horror and there have been several excellent small movies in this genre. However, there is no denying that aficionados of classic horror have been hankering for a grand, lavish fright flick, and Crimson Peak should go a good way towards sating that appetite. 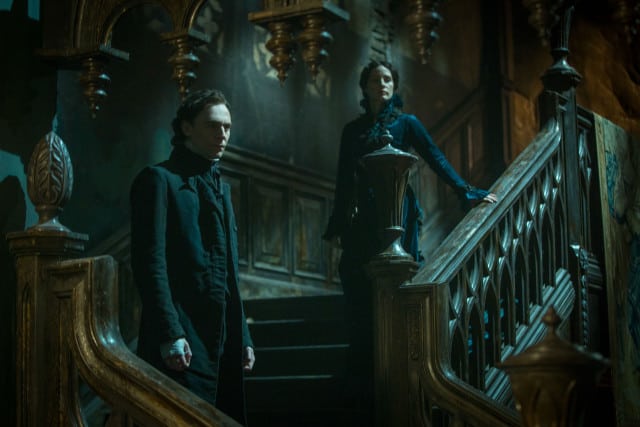 Crimson Peak is a whole-hearted throwback, with del Toro and screenwriter Matthew Robbins citing 1963’s The Haunting and 1961’s The Innocents as primary influences. It also owes a great debt to Edgar Allan Poe’s classic Gothic short story, The Fall Of The House Of The Usher. Clockwork contraptions and dead insects, which the director has a particular fondness for, figure into the plot. The central setting of Allerdale Hall was constructed from scratch at Pinewood Toronto Studios in all its eerily dilapidated glory. del Toro, production designer Thomas E. Sanders, art director Brandt Gordon and the rest of the film’s creative team can take a bow, knowing that they have crafted such a sumptuous, spooky world. Placing the house atop a red clay mine is an inspired touch, allowing for the haunting imagery of the blood-red clay seeping into the snow above, hence the name “Crimson Peak”. The ghosts, rotting carcasses enrobed in wispy, black ether, are suitably grotesque and benefit from the physicality of performer Doug Jones, one of del Toro’s frequent collaborators. 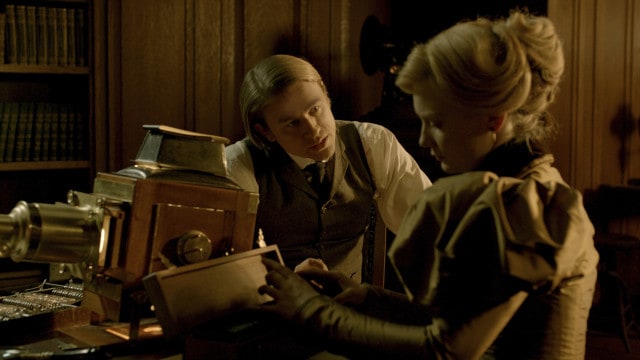 The film is essentially a blood-drenched soap opera: theatrical, highly mannered and often quite arch. As such, del Toro runs the risk of the audience feeling like they are being held at arm’s length, unable to fully sink their teeth into the proceedings. There is very little subtlety to be had – for example, Edith announces upfront that in the story she’s writing, “The ghost is more a metaphor – for the past.” It is possible to step a little too far back and leave the realm of the story. Not entirely dissimilar from American Horror Story or Penny Dreadful, then. One does need to be in the right frame of mind to take in Crimson Peak and this reviewer did appreciate the theatricality, its lurid, saturated palette echoing Italian giallo horror films. In the cut that we watched, a sex scene appeared to have been truncated, presumably to get an NC-16 instead of an M-18 rating. 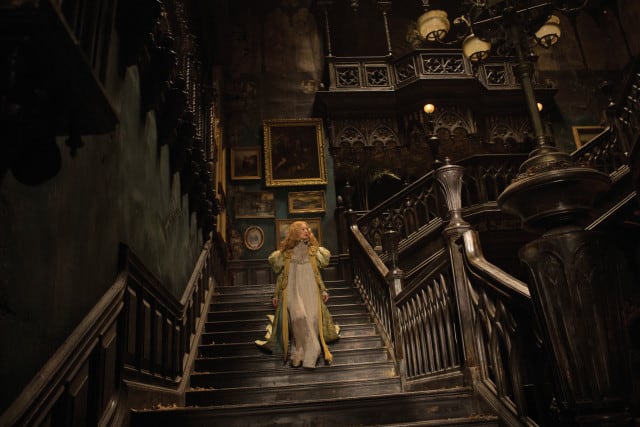 “We have scary ghosts, but even scarier people,” del Toro proclaimed while promoting the film at Comic-Con. A gorgeous set means nothing without a talented cast to inhabit it, so it’s a good thing then that this cast is very talented indeed. Wasikowska, who has played the “ethereal waif” fairly often in her career, is the ideal leading lady for this project. Emma Stone was originally cast, and Wasikowska does seem better-suited to the part of Edith. This is a determined woman who would rather be Mary Shelley than Jane Austen, and the balance between strength and vulnerability is one that Wasikowska absolutely nails. She is the outsider who finds herself plunged into an unfamiliar, frightening world – it’s not a new character type in this genre, but Wasikowska does breathe new life into it. 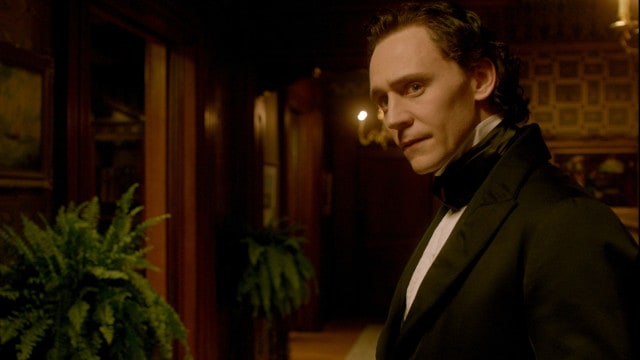 Hiddleston can play “enigmatically charming” in his sleep, and Sir Thomas Sharpe is enigmatically charming to the hilt. Replacing the initially-cast Benedict Cumberbatch, Hiddleston looks right at home in the period costumes and sets. There’s an immediately appealing warmth that he brings to the part, while ensuring that we’re still questioning his motives every step of the way. Chastain’s turn could have used a little more ambiguity, but her icily sinister Lady Lucille is threatening and beguiling all the same. Pacific Rim star Hunnam fares a little worse, playing the “nice guy” who lacks the edginess Hiddleston has and who convention dictates won’t get the girl. He also doesn’t fit into the late-Victorian/early-Edwardian setting as well as his co-stars do. It is pretty fun to see Burn Gorman, also from Pacific Rim, pop up in a cameo. 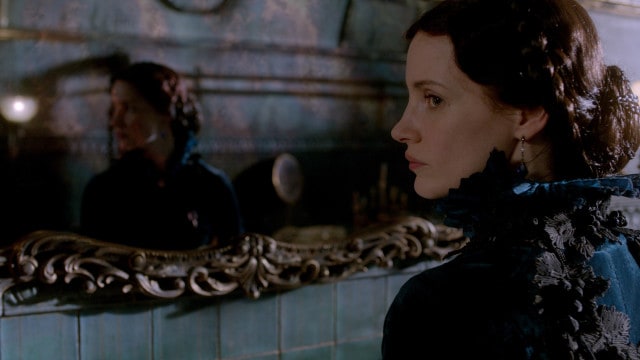 Crimson Peak is the work of a director who is right in his element, given free rein to indulge his dark imagination and reaping rewarding results while at it. It does veer dangerously close to pastiche at times: Fernando Velázquez’s musical score is very on-the-nose, the climactic confrontation involves brandishing a giant shovel, and there might be one too many uses of the iris wipe transition, which most audiences know best from Bugs Bunny going “Th-th-that’s all folks!”. However, more than enough of del Toro’s earnestness and adoration for classic horror comes through, and the splendid production values are a treat amidst the sea of cheaply-made, grainy, shaky contemporary fright flicks.

Summary: Guillermo del Toro delivers a handsome, stately horror film that is a throwback to the heyday of the haunted house sub-genre, with no shortage of gruesome wince-inducing brutality for good measure.