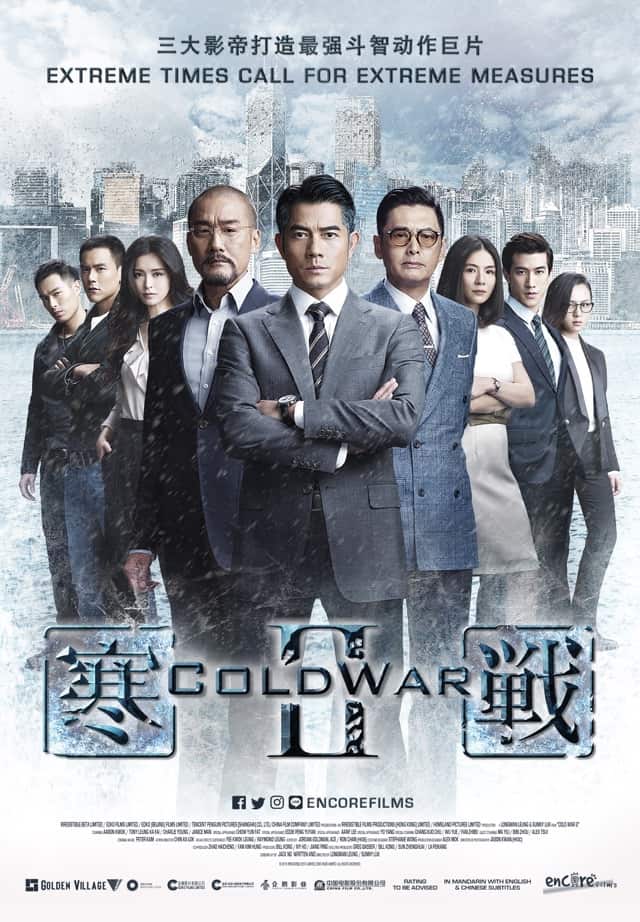 Etched into a wall in the lobby of the Hong Kong Police Headquarters is the slogan ‘Asia’s Safest City’. Yeah right. We all know what city-state actually holds that distinction. If Singapore and Hong Kong were to compete in terms of most cerebral blockbuster, though, Hong Kong would win hands down. Case in point: Cold War 2. While all our cerebral films are decidedly contemplative and our blockbusters downright dumb, this second instalment in what will eventually be a trilogy of police intrigue takes the cake for tight plotting and well-coordinated explosions. You’ll be swept along for the ride, and your brain cells won’t even atrophy due to lack of use (an experience endemic to all Michael Bay movies).

The first Cold War ended on somewhat of a cliffhanger, with an unknown perpetrator threatening the lives of Police Commissioner Sean Lau’s (Aaron Kwok) wife and daughter. Barring a brief interlude to mourn fallen colleagues, Cold War 2 begins right where its predecessor left off, with worst-son-of-the-year Joe Lee (Eddie Peng) once again up to his old tricks. When Lee Junior escapes police custody, dear old dad Waise Lee (Tony Leung Ka Fai) is brought back into the fold after enjoying a scant two days of pre-retirement leave. As if the return of his old rival wasn’t enough, Sean is also targeted by his enemies within the police force for the fiasco that was Operation Cold War. With his family in danger and an impeachment looming, Sean has to marshal his allies to discover who is really pulling the strings behind the scenes.

The thing about both Cold War films is that they contain lots and lots of characters, most of whom are primarily identified by their official designations in the bureaucratic makeup of Hong Kong’s law enforcement arm. Joining the fray this time are Chow Yun Fat as senior counsel Oswald Kan and Yo Yang as ex-special ops agent Roy, on top of returning cast members Kwok, Leung, Peng, Charlie Young and Aarif Lee.

It should be difficult to keep track of who everyone is and what they’re doing, but Cold War 2’s plot is so taut and its use of its numerous characters so economical that one rarely feels lost even as new faces and plot twists continue to bombard the screen. Directors Sunny Luk and Longman Leung also served as the film’s screenwriters, and they appear to have a very clear picture of what their endgame is, picking up loose threads from the first film and introducing new ones with adept perspicacity. This reviewer watched the first film shortly before the second one, and was amazed at how neatly everything adds up. If some questions are still unresolved, that’s only because Luk and Leung are looking ahead to the upcoming third instalment.

The action sequences aren’t half-bad either. Cold War 1 rained bits of skyscraper onto the streets of Hong Kong after a fireworks display escalated into a full-blown bomb threat, and the second film doesn’t let off the pace with a memorable tunnel shootout and a junkyard-set, flame-engulfed centerpiece. The body count inevitably piles up, but the deaths never come across as completely gratuitous. No one gets blown up for the sake of being blown up, and some care is taken to dwell on even the deaths of the nameless foot-soldiers, who are normally so much free frag.

Tony Leung Ka Fai won Best Actor for his turn as Waise Lee at the 2012 Hong Kong Film Awards, and his performance this time around is just as laudable, vastly overshadowing last year’s Best Actor recipient Kwok. Despite having been doubly humiliated by enforced retirement and a wayward son, Leung’s Waise remains a stoic mystery, the exact nature of his moral compass still resolutely up in the air. Chow Yun Fat comes in for a bit of scenery-chewing of his own, but can’t quite threaten the robust dynamic Leung and Kwok have developed over the course of two films. The only objection that might be raised is that many of the first film’s supporting characters (that is, the ones who haven’t bitten the dust) return for what amounts to no more than glorified cameos, although fans of HK films and TVB dramas should be having too much fun recognising all the familiar faces to care.

Made in Hong Kong by local creators and featuring some of Hong Kong cinema’s brightest luminaries over the past few decades, Cold War 2 is undoubtedly a homegrown triumph. Despite suffering top-down pressure from the hinterland (a state of matters subtly hinted at in the film) and competition from a certain Southeast Asian island nation, the flame of Hong Kong cinema still burns as bright as ever, if this film is any indication.

Summary: Dubious claims of municipal safety aside, Cold War 2 is a smart blockbuster that showcases the best of mainstream Hong Kong cinema today.