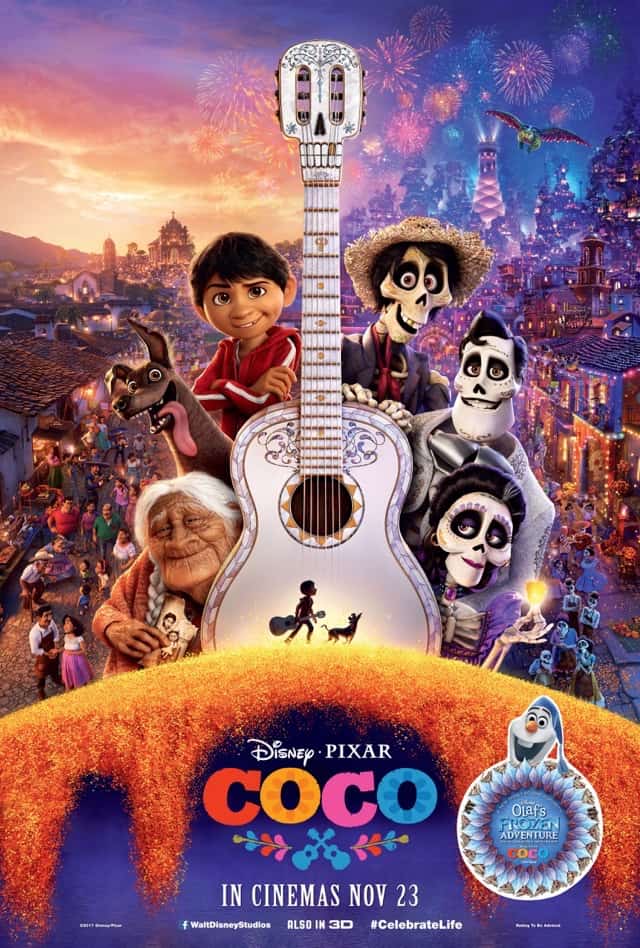 Since its inception, Pixar has prided itself on creating films for the entire family. This shouldn’t be confused, of course, with the mildly derogatory label of ‘family-friendly’, which is usually slapped on movies cobbled together to distract children, while also driving their parents to distraction. Rich, deep and profound, Pixar’s films are something else altogether. They may star toys, cars, bugs, fish and rats, but they deal with universal themes like growing up, loss and depression. And now, Pixar is dealing with death as well – Coco is a bold, tender meditation on living and dying that is as morbid as it is marvellous.

All 12-year-old Miguel (voiced by newcomer Gonzalez) wants is to sing and strum his guitar, entertaining the masses just as the late superstar, Ernesto de la Cruz (Bratt), did. Unfortunately, he must adhere to a strict ban on music that has been imposed within the family for generations – a decision taken by his great-great-grandmother, Imelda (Ubach), after her husband abandoned the family to pursue his dream of becoming a musician.

Determined to enter his town’s Día de los Muertos talent show, Miguel sneaks into de la Cruz’s mausoleum to borrow his idol’s iconic guitar. When Miguel touches the instrument, however, he finds that he now has the ability to enter the Land of the Dead – an afterlife bursting with every colour of the rainbow and populated by those who have shuffled off the proverbial mortal coil.

Coco checks quite a few boxes on Pixar’s preferred list of tropes and themes. It’s a coming-of-age story, as Miguel learns not just the cost and value of his dreams, but also the importance of family. Woven into the narrative, too, is an odd-couple road trip of sorts, as Miguel cuts a deal with the eccentric, big-hearted Hector (Bernal) – a deceased resident desperate to cross over to the Land of the Living – and they set off on an epic adventure to locate the legendary de la Cruz.

Familiar though it may occasionally be in terms of plot and predicament, Coco taps into something joyfully fresh in its setting and scenery. It’s not the first time the Mexican conception of the afterlife has underpinned an entire animated movie; that honour belongs to 2014’s quaintly quirky The Book Of Life.

But Coco makes it all erupt off the screen in a charming, chaotic tumble of colour. It’s no coincidence that the film, which gets off to a deceptively slow start, explodes into kaleidoscopic life once it enters the Land of the Dead. Suddenly, Miguel is consorting with neon-bright spirit creatures and skeletal figures so expressively animated that they can easily skate a fine line between sad, snarky and sinister.

All the eye-popping colour and design in the world would mean little, however, if the film ultimately failed to capture audiences’ hearts. Fortunately, there’s little danger of that happening where Coco is concerned. In fact, be warned – keep a firm hold of your heart and your composure, because you might find yourself losing both before the final credits roll.

Underscored by an utterly gorgeous soundtrack soaked in love and loss, Coco serves up some potent reminders of the power, value and importance of family – with a few perfectly crafted twists along the way. The film is all the stronger for weaving Miguel’s relatives from the great beyond into his narrative, allowing them to cast both light and shadow on his life-changing adventure. Imelda, for instance, comes into her own as a sharp, unforgettable voice and presence. As Miguel makes friends, choices and mistakes in the Land of the Dead, it becomes clearer just how Imelda’s story continues through his, and how his tale is shaped by her decisions and heartbreak.

Taken altogether, Coco will leave you with a devastating, but also powerfully uplifting, sense of how our dearly departed never really leave us. We are who they helped us to be, and they live on as long as their stories are remembered. That’s a remarkably brave concept for a film meant for the entire family to tackle, but it’s one that Pixar pulls off with flair and care to spare. Just be prepared to have some seriously grave conversations about life and death with the little ones…

Summary: Coco pops off the screen in a blast of colour, humour and heart. Bring tissues.