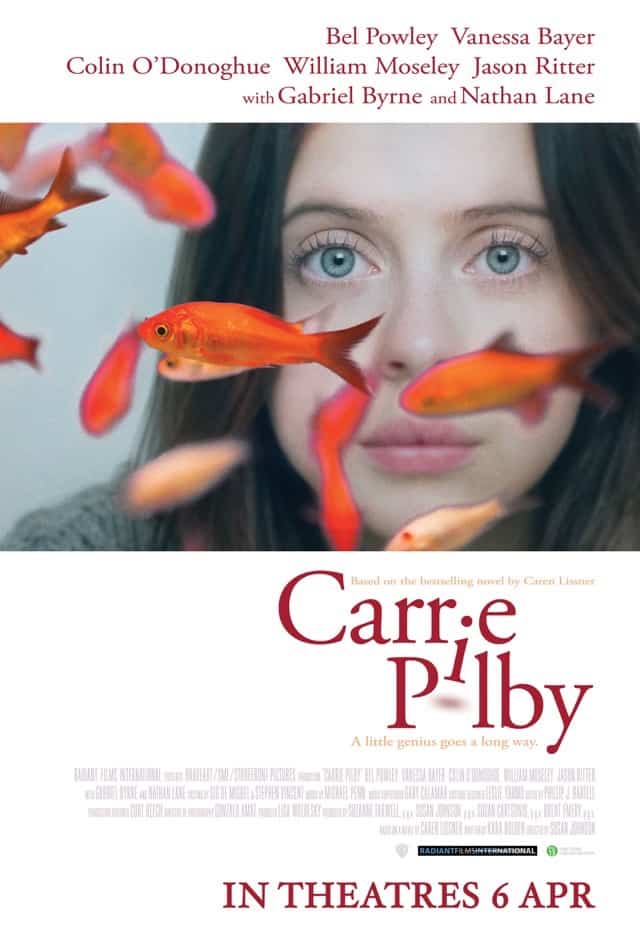 High-functioning geniuses are all over TV, typically solving crimes while earning equal measures exasperation and adoration from someone named Watson. In this coming-of-age comedy-drama, the titular character does no crime-solving, but does do plenty of soul-searching.

Carrie Pilby (Powley) is a 19-year-old Harvard graduate living in New York City. She has a keen intellect, having been accepted into the school at age 14, but is socially mal-adjusted. Carrie resents her father (Byrne) for neglecting her and remaining in England. Carrie’s father has engaged therapist Dr. Petrov (Lane) to counsel Carrie. Petrov assembles a ‘to-do list’ for Carrie: go on a date, make a friend, spend New Year’s Eve with someone, get a pet, do something you loved doing as a child and read your favourite book. While Carrie initially scoffs at the list, she tries moving out of her comfort zone to tackle the tasks on the list. She begins working as a proof-reader at a law firm, befriending her colleague Tara (Bayer) while trying to ignore the dopey Douglas (Borges), another colleague. When Carrie goes out with an engaged man named Matt (Ritter) to out him as a cheater, painful memories of a relationship with Professor Harrison (O’Donoghue) are unearthed. As smart as she is, maybe love is the one thing Carrie can’t figure out.

Carrie Pilby is based on the 2003 novel of the same name by Caren Lissner, adapted for the screen by Kara Holden and Dean Craig, and directed by Susan Johnson. The film bears many hallmarks of the quirky, hip indie comedy-drama subgenre, and has trouble shifting gears from glibness to sincerity. Structurally, it doesn’t flow all too smoothly, and seems like it might work better as a TV show – perhaps a less obnoxious Girls (just kidding, this reviewer doesn’t watch Girls and is merely going off the show’s reputation). While there are glimmers of razor-sharp wit, the dialogue is generally too smart aleck-y for its own good. On the up side, it certainly isn’t as mopey as many young adult-aimed coming-of-age stories are, and there’s a pleasant tinge of optimism that sometimes cuts through its annoyingness.

The film rests squarely on the shoulders of English actress Powley, who strikes this reviewer as a teenage Maggie Gyllenhaal with a dash of Felicity Jones. Powley is an engaging presence and she gamely tackles the comic material, fully embracing the character’s awkwardness. One gets the sense that for as much time as we spend with Carrie, she’s still not too much more than the “socially-impaired teen prodigy” archetype. We get the sense that Powley is, as a performer, a whole deal more likeable than the Carrie character is written. The main way her social awkwardness manifests is how she’s quick to tell everyone just how smart she is. Despite the sympathy Powley is capable of generating, Carrie still feels a little too manufactured to be a fully-realised character. Hailee Steinfeld was originally cast as Carrie, and had to drop out due to scheduling conflicts – we could see her pulling the role off too.

Nathan Lane plays the straight man here, suppressing his innate comic sensibilities. He’s able to marshal a warmth and wisdom befitting a therapist, sharing some fun, gently adversarial scenes with Powley. Byrne isn’t in the film for too long, but he shines when Carrie and her father get to share an unconventional bonding moment.

From O’Donoghue’s dashing young professor to Ritter’s would-be cheater to William Moseley’s multi-instrumentalist, Carrie is positively surrounded by handsome men. It’s never easy navigating the winding paths of romance as one faces adulthood, much less for someone who’s never fit in. However, Carrie’s romantic misadventures seem largely in line with the experiences most of us have had. Carrie’s run-ins with the opposite sex seem to hew closely to established rom-com tropes, though there are several conversations that she has which possess adequate depth. Long-serving Saturday Night Live cast member Bayer is hilarious, even though Tara is the ‘sassy best friend’ stock character through and through.

Carrie Pilby has garnered positive attention for being a film about a woman which has a female director, female producers and a female co-writer, and while its sometimes amiable, this is far from ‘hidden indie gem’ material. This might be too twee and grating for some, but others will be able to relate to its imperfect, awkward protagonist. And as a bonus, there sure are some good-looking guys in the cast.

Summary: Sometimes loveable and sometimes insufferable, the uneven Carrie Pilby is a lot like its idiosyncratic title character.