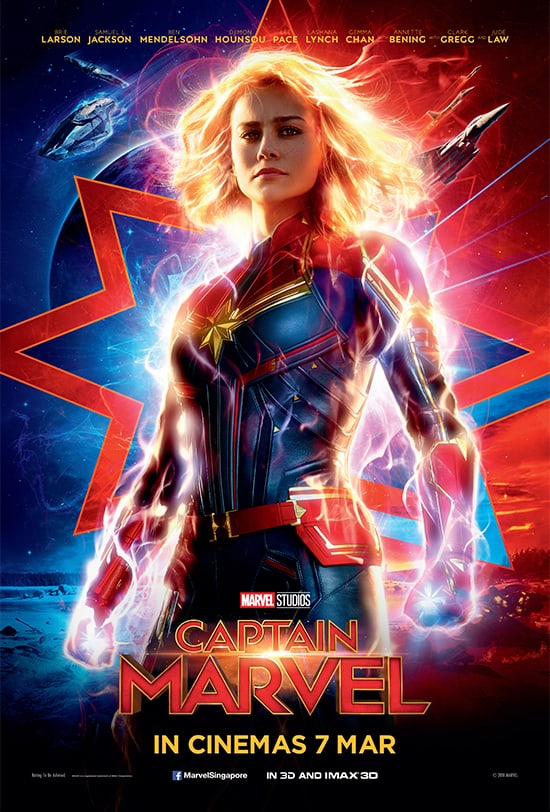 The Low-Down: It’s been a long, slightly ludicrous time in coming, but Marvel Studios’ first female-led superhero movie is finally blasting into cinemas. Unfortunately, Captain Marvel is trailing plenty of controversy in its wake, largely generated by the same toxic, sexist segments of ‘fandom’ who have been venting their rage online about ‘their’ franchises being taken over by women. (See: Ghostbusters, Star Wars etc.) It’s quite wonderful, then, that Captain Marvel is (literally and figuratively) the most powerful response to these haters yet – not only is it a ton of fun, this film is unapologetically, explicitly feminist in a way that’s never before been presented on screen in such a mainstream blockbuster.

The Story: We first meet Vers (Brie Larson) as a promising new cadet in Starforce, an elite military unit dedicated to protecting the Kree homeworld of Hala from the threat of Skrull invasion. For what she lacks in memories of her own life and story, she more than makes up for in wit, courage and pure power – an energy that her commander, Yon-Rogg (Jude Law), constantly counsels her to keep in check. When a Starforce mission goes wrong and she winds up on Earth, she starts putting together the puzzle pieces of her past as former Air Force fighter pilot Carol Danvers – and begins to reclaim what she has lost.

The Good: All told, Captain Marvel is an absolute blast to watch. Like its titular heroine, the film is fun, fearless and thoroughly feminist: celebrating Carol herself, as well as the women in her orbit who (she will soon discover) helped make her who she really is. The film’s genre-hopping – stacking psychological thriller on top of buddy comedy and spicing it all up with some space opera – doesn’t always work when taken as a whole. But each element of the film is delightful, especially when Carol meets and impresses Nick Fury (a CGI-de-aged Samuel L. Jackson, dialling the goofy charm up to 11) and they embark on a road trip that takes them all the way to the stars. It’s worth pointing out, too, that the film quite ingeniously deepens the Marvel Cinematic Universe (MCU)’s mythology, both backwards and forwards in time, while giving us the miracle that is Goose, a cat Flerken who will steal your heart and also strike fear into your soul – the way all the best cats Flerkens do.

The Not-So-Good: The first act of Captain Marvel is its weakest – it’s almost as if the film, like its title character, hasn’t quite figured out what it is or wants to be. That can make for a mildly puzzling first viewing experience, compounded by a script that makes no allowances for those who can’t keep up with the murkier politics of Kree-Skrull warfare. Due to the deliberately fractured narrative structure (mirroring Carol’s identity crisis), even Marvel aficionados, who can readily tell their Krees from their Skrulls and Marvell from Marvel, might find it challenging to follow the plot at first.

O Captain, Our Captain! Kudos are due to Larson for making all the disparate elements of the film and her character work. For one thing, she makes kicking inter-galactic butt look easy and effortless. But it’s in finding Carol’s heart and soul that Larson truly shines – a particularly impressive feat since she’s essentially playing a character who barely knows who she really is. Somehow, somewhere, in the midst of Carol’s snarky comebacks and fierce smackdowns, Larson promises us a real human being – one we’re excited to get to know better as the MCU continues to grow.

Nevertheless, She Persisted: One of Captain Marvel’s purest delights is its unabashedly feminist heart. In the film’s most emotionally affecting sequence, we see Carol getting up – over and over again, through the ages, over decades, all her life – when she’s told (particularly by the men around her) to stay down, to smile, to please others, to live a life that is nothing like the one she deserves to make for herself. It’s an electrifying moment that will resonate with women and girls everywhere, whose lived experiences are of a world that has them constantly questioning their worth and value. Carol’s true triumph isn’t against hordes of shape-shifting aliens or an imminent inter-galactic attack – it’s against the insidious horrors of toxic masculinity and gaslighting. What makes it all work doubly well is that the film also proudly celebrates the women in Carol’s orbit, from Annette Bening’s brilliant maverick scientist, Dr. Wendy Lawson; to Lashana Lynch’s fiercely competent fighter pilot/single mom, Maria Rambeau.

Fan Fare: Marvel fans, of both the film and comic-book variety, will find themselves very well-served by Captain Marvel. MCU devotees will be rewarded with origin stories for fan-favourite characters – not just Nick Fury, but also Phil Coulson (Clark Gregg), both of whom are decades away from their destinies with S.H.I.E.L.D. and the Avengers. The script is canny enough to use and subvert fan expectations gleaned from decades of comic lore – testing our sympathies most notably in the form of charismatic Skrull leader Talos (Ben Mendelsohn). And be warned: this might well be the first movie ever that has you tearing up even before the opening credits, with Marvel having re-designed its production logo in honour of the late, great Stan Lee and the words he wrote that changed the world.

Recommended? Yes! Captain Marvel pulls off the rather incredible feat of being properly entertaining and enlightening. A film that will reward multiple viewings, it’s an essential addition to the canon of superhero movies.