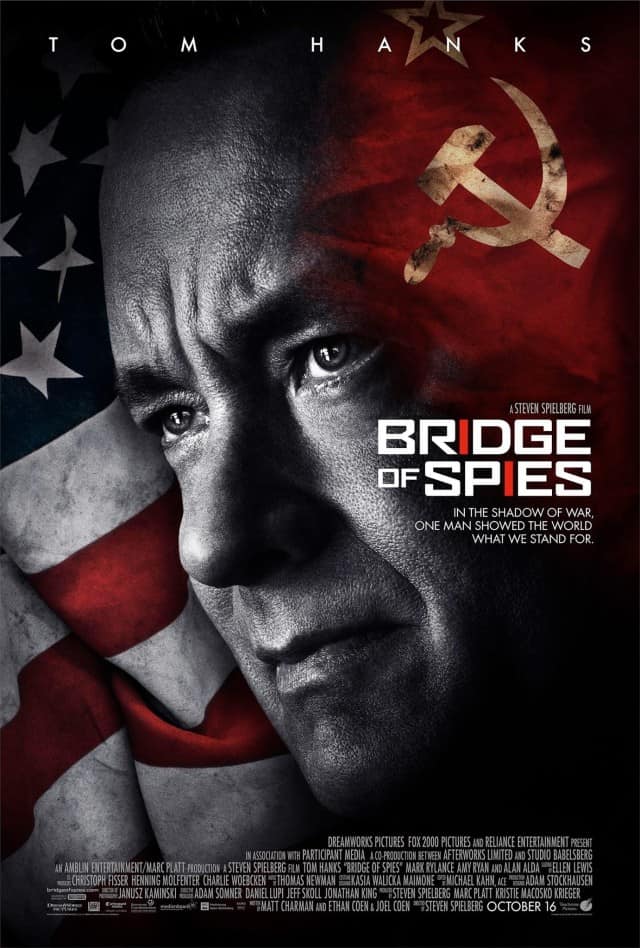 We’ve had our late-summer fun with The Man From U.N.C.L.E., but with fall awards movie season upon us, it’s time to revisit the Cold War in a far more serious manner. It is 1957 and Soviet spy Rudolf Abel (Rylance) is captured by the FBI in Brooklyn. The Brooklyn Bar Association elects for insurance attorney James Donovan (Hanks) to serve as Abel’s counsel. Three years later, after U-2 spy plane pilot Francis Gary Powers (Stowell) is captured by the Soviets, Donovan is tasked with negotiating his release. The deal is an exchange of Abel for Powers. Naturally, things aren’t that clear-cut, and the East Germans have American student Frederic Pryor (Rogers) in custody. With the odds stacked high against him, Donovan flies to East Berlin to bargain for the safe return of both Americans as the threat of nuclear war between the two superpowers looms ever greater. 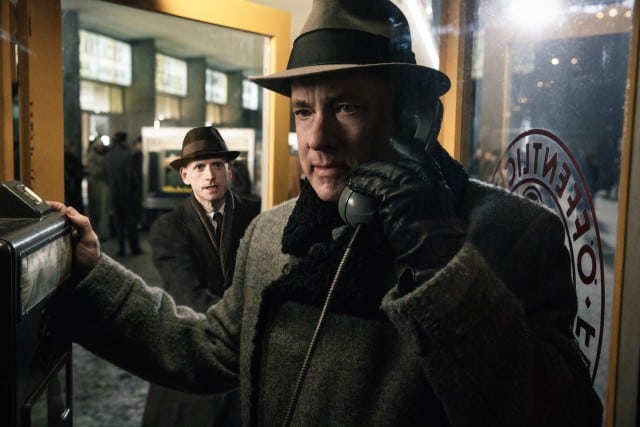 Bridge of Spies is based on the 1960 U-2 incident, an actual event, with a screenplay by Matt Charman and rewritten by Joel and Ethan Coen. The title refers to Glienicke Bridge, which was the site for several prisoner exchanges between the Americans and Soviets. The film has been described as a “Cold War thriller”, but it’s more of a courtroom drama and not an action-driven spies vs. spies affair. Director Spielberg’s follow-up to 2012’s Lincoln is another sombre awards contender, but this is more accessible to the average filmgoer, less dense and scholarly. Bridge of Spies is an old-fashioned drama, with the bleakness of a rubble-strewn East Germany evoking the gloomy vision of Vienna as seen in the classic spy film The Third Man. There is a stillness about the film, which is very much a slow burn. Spielberg’s films are seen by many as varying degrees of schmaltzy. While Bridge of Spies certainly has its emotionally impactful moments, it is largely restrained and the feeling of frigid detachedness effectively captures the atmosphere of the Cold War.

If the film that surrounds him is cold, Hanks is Bridge of Spies’ warm, beating heart. In this, his fourth collaboration with Spielberg, Hanks is called upon to embody the archetype of a decent man in an indecent time. If there’s anything Hanks can play, it’s “decent” – he does that and so much more here. James Donovan is a consummate professional who is flung into unfamiliar territory but who always stands his ground, his attentiveness and upstanding nature recalling To Kill a Mockingbird’s Atticus Finch. It turns out that Gregory Peck almost played Donovan in 1965, with Alec Guinness set to play Abel opposite him, but the film was ultimately called off as the era was too fraught with political tension for it to be made. When Donovan arrives in East Germany, construction has just begun on the Berlin Wall, and the angle of a relatively ordinary man caught up in extraordinary circumstances is the audience’s way in. As Donovan is accosted by gang members, catches a cold and has to deal with Soviet and East German officials, he remains admirably steadfast, clinging to his principles, the ideal unassuming hero. 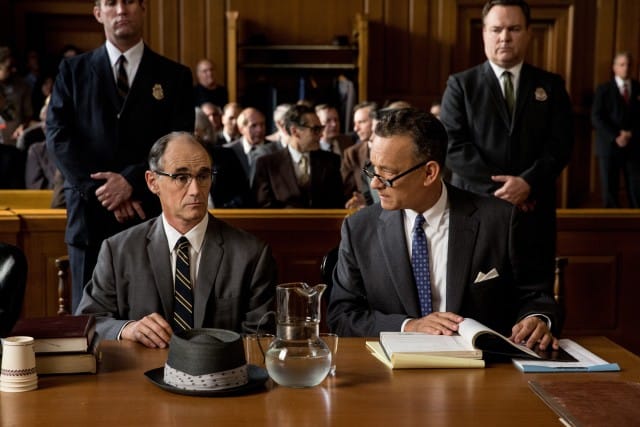 Rylance, a veteran of the London stage, is coolly compelling as Rudolf Abel. Abel is a Russian spy, ostensibly the bad guy, but the film doesn’t demonise him, taking the stance that the Soviets had their spies and the Americans had theirs. Rylance’s Abel is unflappable and inscrutable, and the unlikely bond that Abel forms with Donovan makes for a fascinating and subtly moving dynamic. While audiences are very familiar with Hanks, Rylance isn’t as recognisable a name, and perhaps that unfamiliarity adds to Abel’s mystique. Spielberg apparently enjoyed working with the actor and Rylance will play the title character in Spielberg’s next film, The B.F.G. Defending Abel makes Donovan a very unpopular man indeed, and this takes its toll on his family, especially his wife Mary (Ryan). The scenes involving Donovan’s family and Pryor’s arrest at the border are the closest Spielberg comes to indulging his more sentimental sensibilities, but these moments are necessary to establish the personal stakes involved.

Spielberg’s usual cinematographer Janusz Kaminski and editor Michael Kahn bring the technical polish that we’ve come to expect from his films, but one key collaborator is missing: composer John Williams. Owing to a minor health issue which has now been resolved, Williams was replaced by Thomas Newman. Newman’s score is appropriately dignified, containing his own trademark instrumentation while not sounding a million miles away from what Williams might have written. 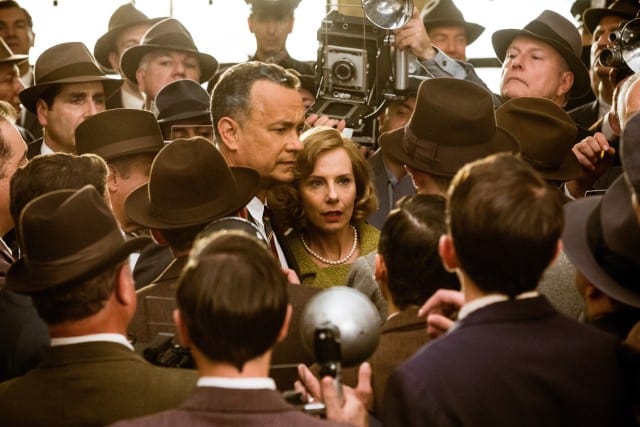 Spielberg has always been an idealist, and along with lead actor Hanks, he brings a reassuring, old-fashioned moral certainty to this tale set in one of the murkiest eras in modern history. Even so, Bridge of Spies avoids being naïve and manipulative in its account of the U-2 incident negotiation process. Perhaps this reviewer just isn’t that much of an intellectual, but the one action sequence in which Powers’ U-2 spy plane is shot out of the sky did make him hanker for another Spielberg-directed straight-up action adventure. Of course, that’s not the kind of film Bridge of Spies is, and it lives up to the pedigree before and behind the camera, succeeding at being a sturdy, well-made historical drama.

Summary: As prestigious as prestige pictures get, Bridge of Spies is a restrained, quiet drama anchored by Tom Hanks’ reassuring presence, with thespian Mark Rylance stealing the show from him at times.