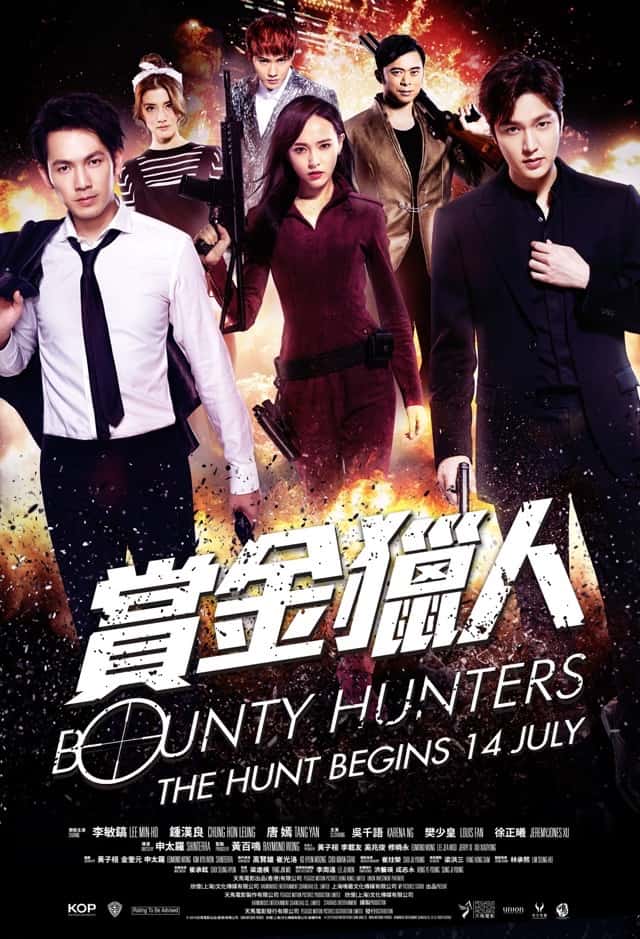 “Bounty hunters. We don’t need their scum,” so sneered Admiral Piett in Empire Strikes Back. In this Hong Kong/China/Korean co-production, the bounty hunters in question are a great deal more attractive than Bossk, 4-LOM, Zuckuss, Dengar, IG-88 and Boba Fett. Lee San (Lee) and Yo (Chung) are former Interpol agents now working as bodyguards. When they accept a job to protect a reporter, they are framed for a hotel bombing in Incheon, the third following attacks in Singapore and Tokyo. Lee San and Yo throw in with a team of bounty hunters led by heiress Cat (Tang), also comprising tech expert Swan (Ng) and jack-of-all-trades manservant Bobo (Fan). The team has also been implicated in the attacks. In a mission that spans across Hong Kong, Bangkok and Jeju Island, our motley crew must track down Tommy (Xu), the actual culprit, and put an end to the serial bombings.

Bounty Hunters definitely looked like it could be a lark: a gaggle of good-looking guys and gals strutting their stuff in-between shootouts, car chases and explosions – what could go wrong? Alas, Bounty Hunters turns out to be quite the bust. Shin Terra, who has also directed action-comedies Runaway Cop and My Girlfriend is an Agent, displays equal ineptitude in serving up laughs and thrills. Bounty Hunters is plagued by an awkward, arrhythmic goofiness: much of the humour is of the cringe-inducing slapstick variety, and because large stretches are so silly, any sense of peril is unable to take hold, nullifying whatever high-stakes international intrigue there’s supposed to be. The musical score is straining for spy movie chic but comes off as self-parody and the globe-trotting seems modest rather than glamourous.

Lee San and Yo spend a large amount of their screen time bickering with each other, which is tiresome instead of amusing. There’s no denying that Lee Min-ho packs a potent amount of boyish charm and he’s certainly a watchable performer, but we’re not entirely convinced of his action hero chops. It could just be a misguided stylistic choice, but the excessive shaky-cam and whiplash editing during the fight scenes seems suspiciously like it’s intended to disguise a stunt double. Chung gamely goes for the pratfalls, but he and Lee do not make a particularly memorable buddy duo.

The circumstances under which Lee San and Yo join up with Cat and her gang seem awfully convenient, and although there’s the expected animosity at the outset, they’re accepted into the fold with relative ease. Each member of the crew is a one-dimensional stereotype: there’s the wealthy, mysterious leader, the burly, dim-witted muscle and the hip millennial hacker who wears a backwards-facing baseball cap in case you didn’t know she’s cool. Sporting a shock of red hair and a preppy outfit, Xu looks like he’s stepped out of an anime. He plays a villain of the most insufferable variety: the cut-rate Joker, prancing about, cackling, then casting a faux-creepy dead stare. It’s campy, obnoxious and not threatening in the slightest.

There are glimmers of entertaining chemistry from the crew to be glimpsed, but when everyone’s playing a stock character and there’s no urgency or forward momentum to be found, it’s difficult to get invested in the proceedings. This reviewer tuned out during the protracted climax set in a Jeju Island hotel suite. At one point, Lee fends off hordes of business suit-clad thugs. Of course, they attack one at a time, with the others dancing about in the background, a textbook example of the “conservation of Ninjitsu” trope. Apart from the regrettable design choice of using blue cartoon lightning to represent taser shocks, the production values aren’t bad and a skydiving sequence is surprisingly believable. However, sporadic competence just won’t cut it. Bereft of twists and turns to keep the audience on their toes, a movie that should be light on its feet instead turns out to be quite the drag.

Summary: Sure, it’s a pretty-looking cast, but audiences in search of deft comic timing and edge-of-your seat thrills will have to take the Hunt elsewhere.