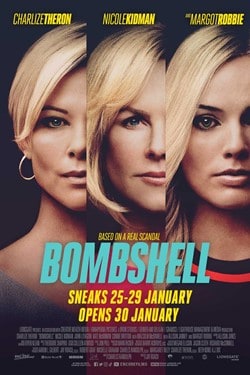 The Low-Down: Millions of Americans turn to Fox News for political commentary and opinion every day, and the channel is the preferred media mouthpiece of the current occupant of the White House. This film tells the story of how a pervasive pattern of sexual harassment perpetrated by CEO Roger Ailes and other high-ranking members within the organisation was brought to light. 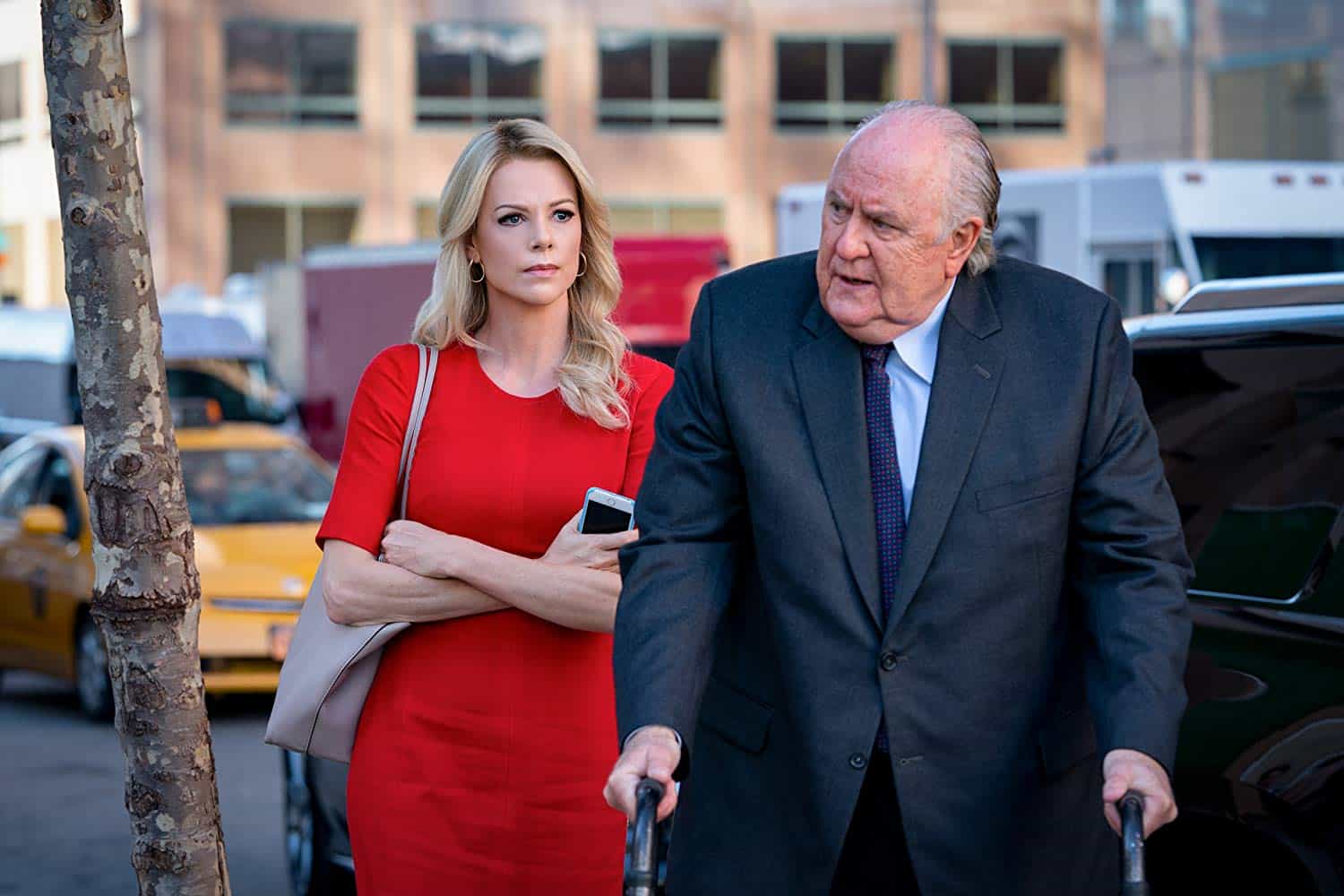 The Story: It is 2015 and Megyn Kelly (Charlize Theron), a popular anchor on Fox News, earns the ire of Donald Trump, Republican front-runner in the 2016 presidential election. After asking Trump a question about his history of alleged mistreatment of women at a televised debate, Kelly is targeted by Trump and receives a barrage of attacks for challenging him. In the meantime, Fox and Friends co-host Gretchen Carlson (Nicole Kidman) is taken off the popular morning show and given her own show in a bad timeslot. Carlson constantly faces sexism and has repeated advances made on her by Roger Ailes (John Lithgow). After meeting with lawyers, Carlson plans to sue Ailes for harassment. 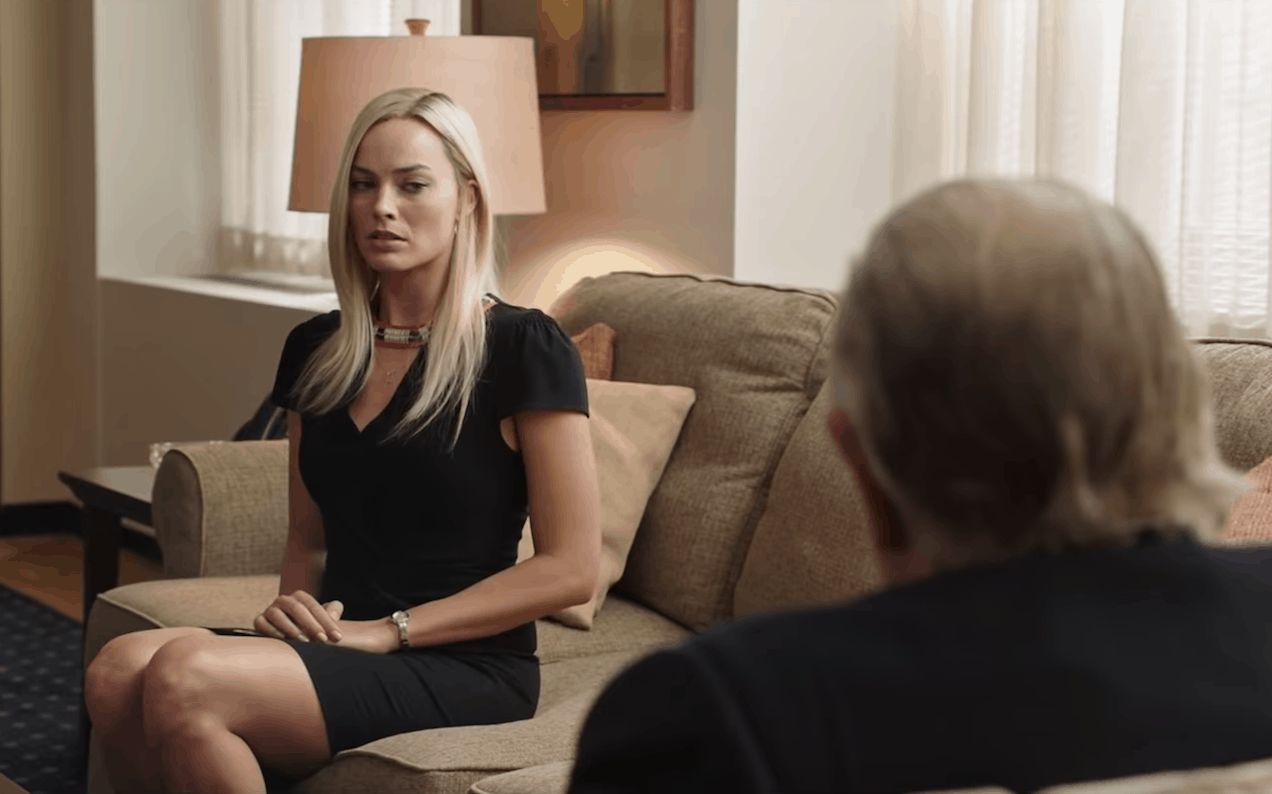 Ailes’ latest victim is Kayla Pospisil (Margot Robbie), a newcomer with dreams of being a Fox anchor. Kayla befriends Jess Carr (Kate McKinnon), a Fox staffer with something to hide. Soon, Carlson’s lawsuit causes tension within Fox News, with pressure mounting for the anchors to defend Ailes – something Kelly refuses to do. A rift forms between Ailes and media mogul Rupert Murdoch (Malcolm McDowell), the owner of Fox News, as many more credible accusations against Ailes and other men at Fox News surface.

The Good: Bombshell has a largely excellent cast giving the material their all. Charlize Theron has netted an Oscar nomination for her turn as Megyn Kelly – subtle special effects makeup alters her features to increase the resemblance, but the truly uncanny element of her performance is the voice she affects. While it sometimes sounds like she’s struggling to sustain it, it works. 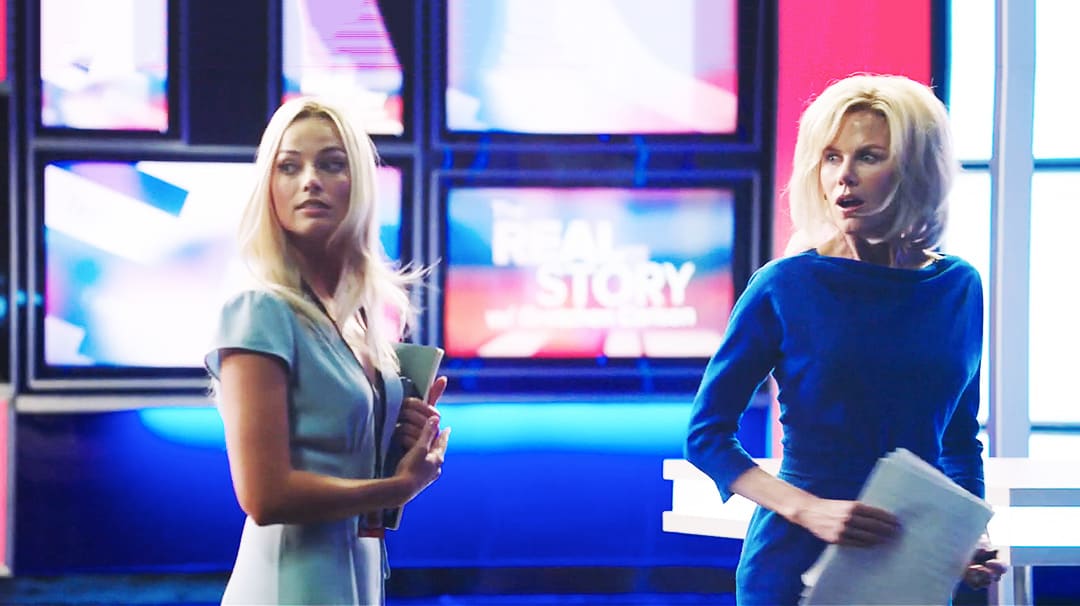 Robbie is eminently sympathetic, playing some emotional moments such that they’re especially heart-rending. 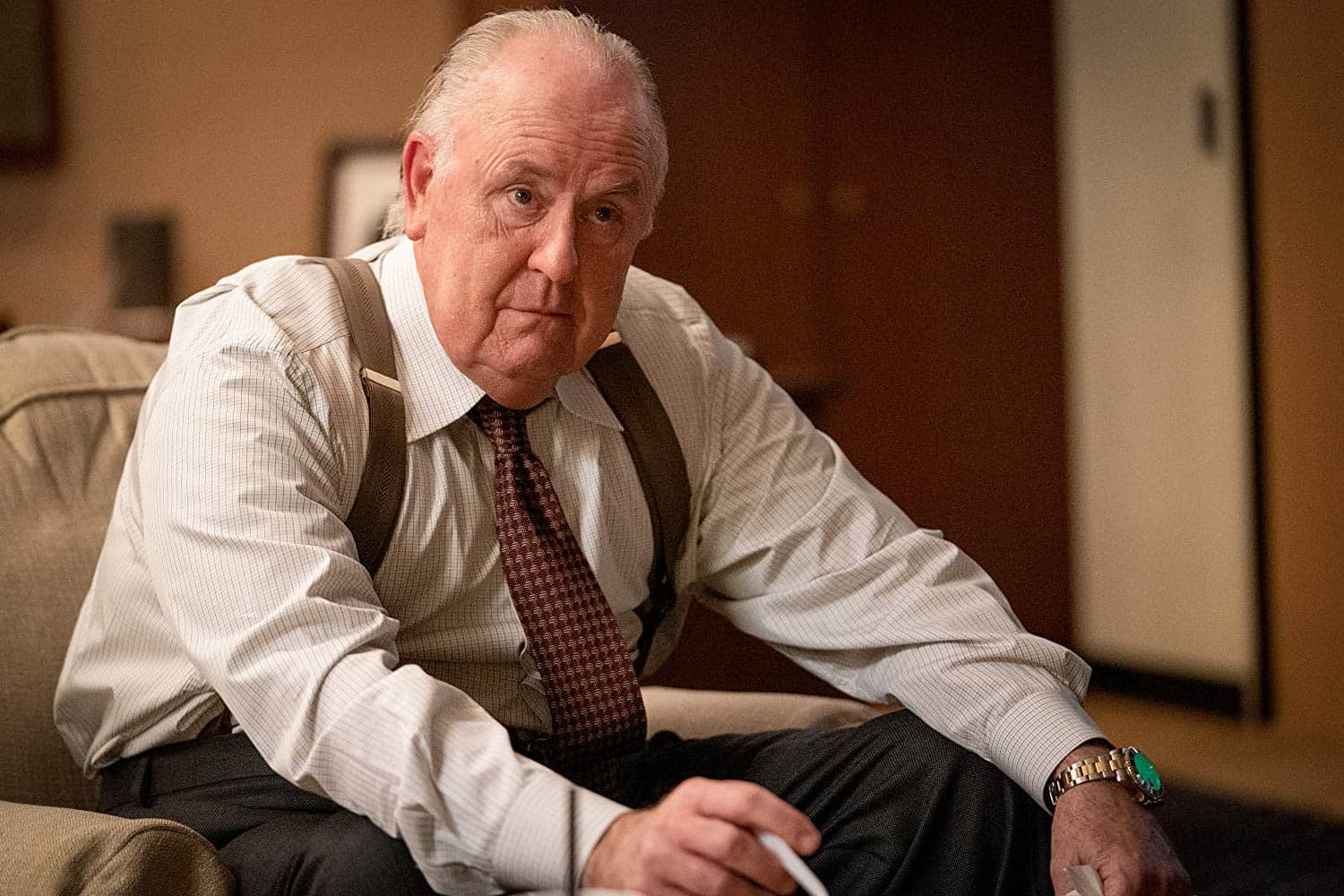 Encased in layers of prosthetic makeup to play the slovenly Ailes, John Lithgow is especially watchable playing blustery characters, and Roger Ailes is nothing if not blustery, always a second away from yelling – and worse – at his employees.

Bombshell is often energetic and is very good at conveying the crushing atmosphere of fear at Fox News that caused many of Ailes’ victims to hesitate in speaking out. The film is not especially accessible to those that do not have prior knowledge of Fox News and its key personnel, but it does an adequate job of portraying the tension between Ailes and the Murdochs, as well as highlighting how sexism manifested itself on the Fox air. 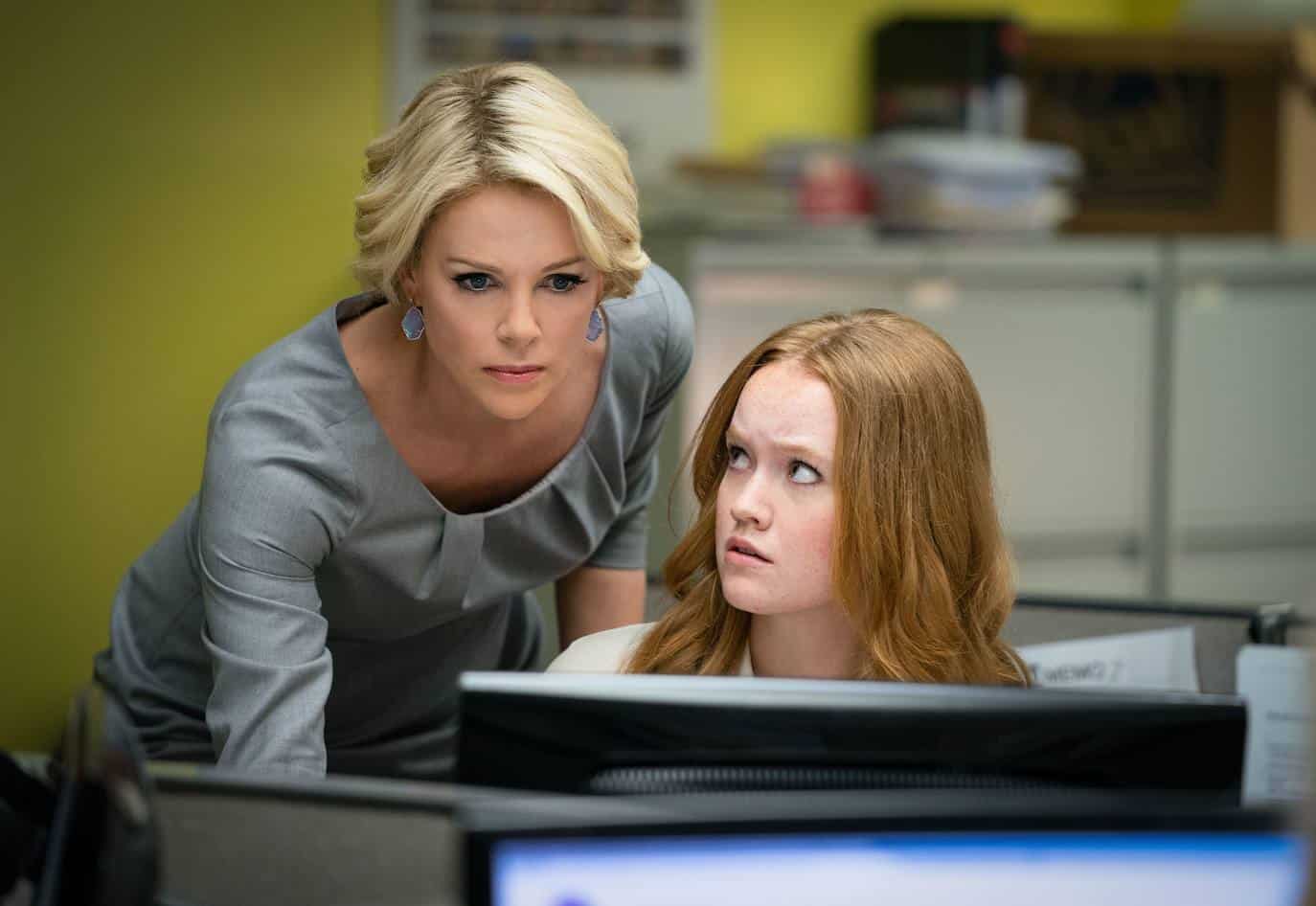 The Not-So-Good: Unfortunately, it feels like Jay Roach is not the best director for this. Yes, Roach has directed the Sarah Palin-centric film Game Change, but he is best known for his comedies, including the Austin Powers trilogy, Meet the Parents and Meet the Fockers. Bombshell’s overall jokey tone is at odds with the graveness of the subject matter, meaning the film’s tonal shifts are often jarring. Scribe Charles Randolph, who won an Oscar for co-writing The Big Short, brings a lot of that film’s glibness to this project. There are many stylistic choices which call attention to themselves, including characters frequently breaking the fourth wall to address the audience. This reminds audiences of the artifice of the film, and yet, there is a heavy use of handheld documentary-style camera moves, including suddenly zooming in on a character’s face as they react to something – this is perhaps more reminiscent of The Office than of most documentaries. 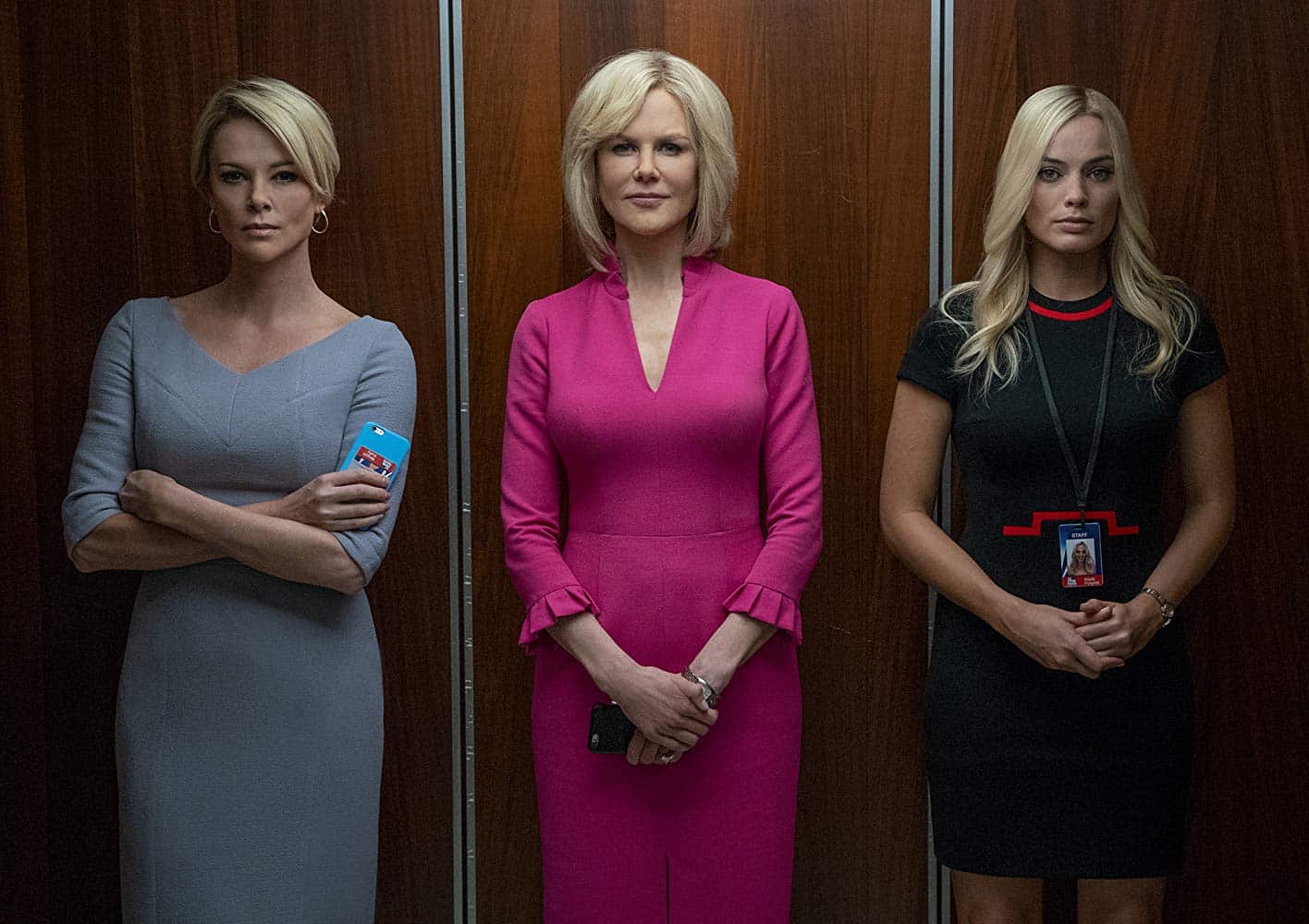 Not unlike 2018’s Vice, Bombshell feels like a movie that constantly gets in its own way because it is determined to present the story in a fast-paced, eye-catching manner. The movie sometimes sabotages the committed performances its actors give in the name of excitement. In trying to cover as much ground as possible, Bombshell goes for breadth over depth, with title cards popping up to introduce each new player as efficiently as possible. It does all this while keeping Megyn Kelly front and centre as the main heroine of the piece, such that it feels like the story was manipulated to give her prominence over Carlson and others. Interestingly, Kelly was wholly absent from The Loudest Voice, the 2019 TV series starring Russell Crowe as Ailes and covering much of the same ground. Kelly herself said meteorologist Janice Dean should have been featured in the film, as she became the confidant for many fellow victims of Ailes.

Many other noted Fox News personalities briefly show up in the film, including Kimberly Guilfoyle (Bree Condon), Ainsley Earhardt (Alice Eve), Abby Huntsman (Nikki Reed), Chris Wallace (Marc Evan Jackson), Sean Hannity (Spencer Garrett), Geraldo Rivera (Tony Plana), Jeanine Pirro (Alana Ubach) and Greta van Susteren (Anne Ramsay). The overall comedic tone means that some of these performances feel straight out of Saturday Night Live. Yes, this being a film about a media outlet, many of its characters are bound to be recognisable public figures, but Bombshell becomes more of a game of “how much does this actor look like their real-life counterpart?” than it needs to be. 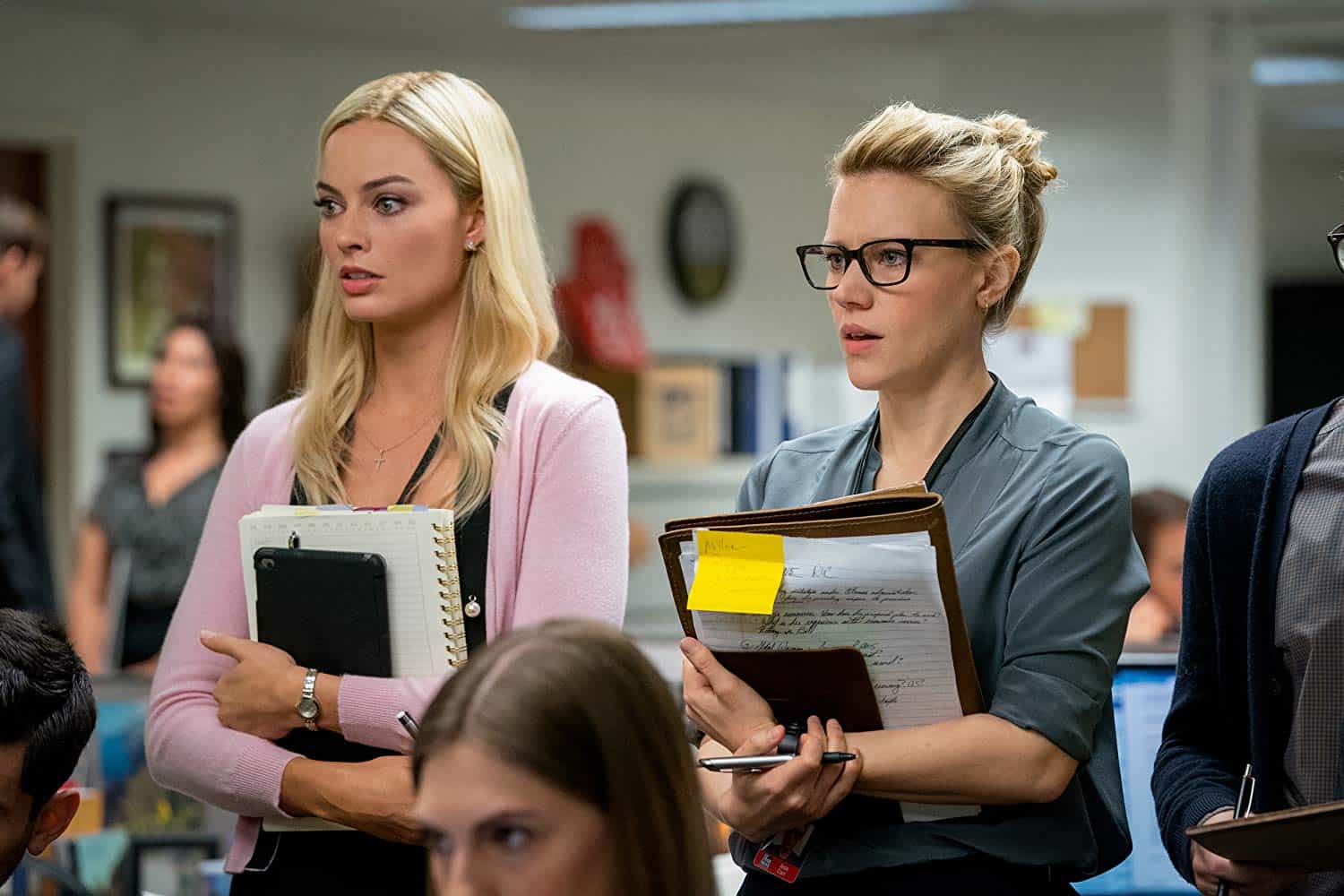 Faux News: The biggest invention in the film is Robbie’s character Pospisil. She is a composite character meant to represent the younger would-be on air talent who were subject to Ailes’ advances. Jess Carr, played by actual SNL star Kate McKinnon, is also fictional. The subplot about the unexpected bond formed between the two women rings especially false. Practically every movie based on a true story features composite characters, but because the scandal at Fox played out in the public eye, audiences can immediately tell that there wasn’t really a “Kayla Pospisil”.

Recommended? Yes, mainly its impressive lead performances – but it will be hard to shake the frustration at how much better this could be.