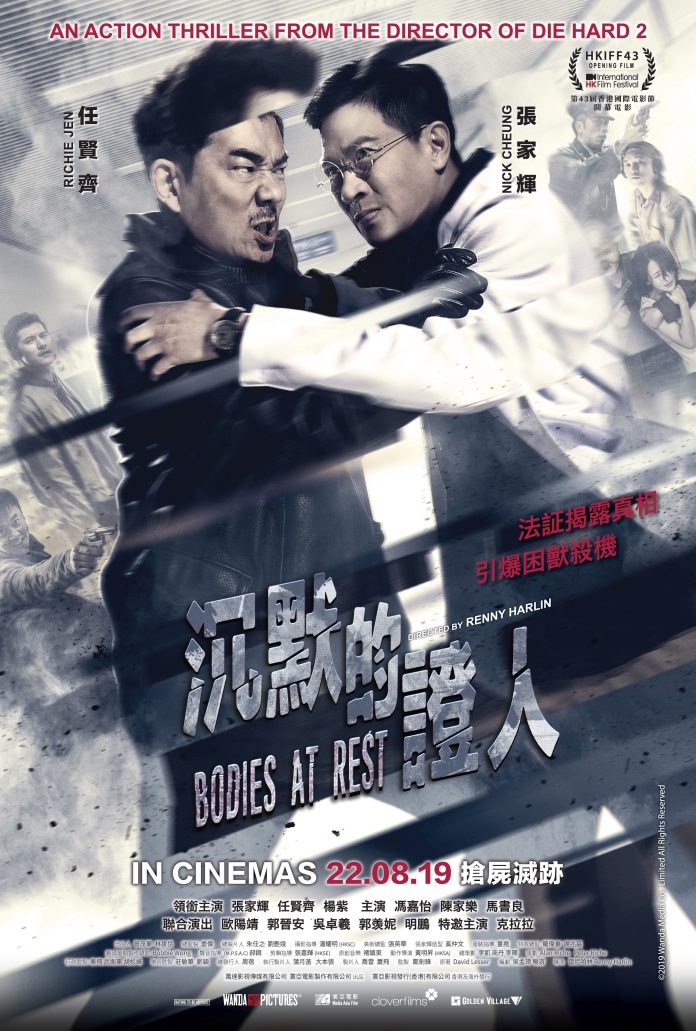 The Low-Down: Die Hard 2’s director Renny Harlin collaborates with Hong Kong star Nick Cheung (The Trough, Line Walker) and Taiwanese singer Richie Jen to make Bodies At Rest, a heist at a morgue to destroy evidence. Bodies At Rest is at its best when it does what the trailer set it up for — an action-packed cat-and-mouse game. When the movie tries to be more with plot twists, it becomes a little stale and unbelievable (in a bad way), a pity for its interesting premise and set-up.

The Story: On Christmas Eve, three masked men — Santa (Jen), Elf, and Rudolph — raid a morgue to retrieve a bullet shell in a corpse. Their plan is to get in and out quickly to minimise risk but forensic doctor Nick (Cheung) and his intern Lynn (Yang Zi) foils their plan again and again. Most of Bodies At Rest is Nick and Lynn refusing to cooperate, fighting back, and the criminal trio’s endless wild goose chase for the bullet shell.

The Good: Ironically, the first 20 minutes or so before the actual heist are the best part — Nick and Lynn chatting with an oddly morbid sense of humour while examining corpses. In the second act where the doctor and intern duo fight back (with shockingly adept combat skills) against the thugs, the camera work and fight choreography are quite decent too. Cheung, Jen, Yang and the supporting cast give the best performance they can with the lackluster script given to them, which can work both ways — trying too hard to the point of goofy or give the movie some saving grace.

The Not-So-Good: Harlin and team spend some time on uninteresting and sloppy backstory telling in a failed attempt to add twists to the plot. What’s worse, both the antagonists and protagonists consistently make questionable (and laughable) decisions that don’t make sense. The biggest slap in the face (and the dealbreaker) is the fact that the bad guys create such a huge mess of the morgue just to cover up the murder of a drug lord’s daughter. Not to mention the CCTVs in the morgue, and the connecting roads that could have easily capture them.

Knock-Out Sequences: Majority of the third act involving the heroes battling the raging inferno is a spectacle, and the rescue (and sacrificial) scenes are exhilarating.

Watch Out For: The melee combat sequences between the Cheung, Yang, Jen and the other brutes. Some are surprisingly well-shot and the cast pulls it off quite convincingly in some of the scenes where no stunt doubles are used.

Recommended? No, unless you’re a Cheung fan or action flick buff. Sure, the fight sequences and performances are decent, but the sloppy narrative and subpar character writing kill the enjoyment. Bodies At Rest could have done a lot more if the direction were to focus on the heist rather than backstories and plot twists that fall flat.