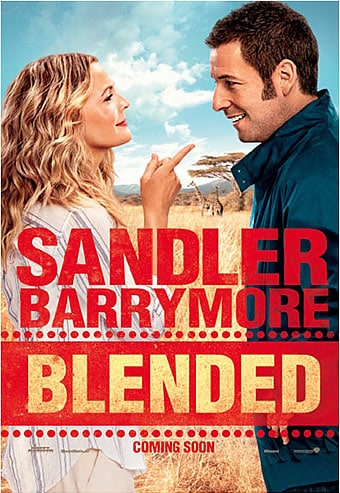 Let’s get one thing perfectly clear: Blended isn’t a great movie. One would even be hard-pressed to call it a good one, given that it’s largely constructed out of uneven gags, faintly sexist ideas and plain dumb comedy. If anything, it’s a guilty pleasure: one of those films that are so bad that they end up being, perversely, enjoyable. But here’s the really odd thing about Blended: it possesses a deep, truthful core of emotion, one so powerful that it not only elevates the entire film, but will hit you squarely in the heart if you let it.

Jim (Adam Sandler) and Lauren (Drew Barrymore) first meet on a catastrophic blind date. He annoys her, she offends him, and they seem very much like a match made in hell rather than heaven. But, through a (rather contrived) narrative twist, the pair end up spending a week at an African resort with their families in tow – Jim with his three daughters, and Lauren with her two sons. As they ride ostriches and go para-sailing, they take care of each other’s kids and slowly, surely fall in love. 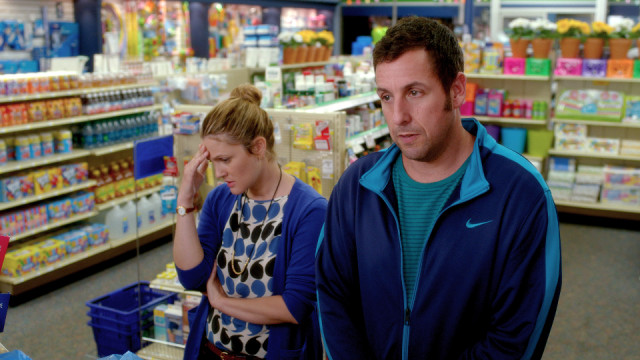 There are plenty of reasons to be put off by Blended. Its humour is frequently of the puerile, almost infantile variety – Barrymore is required to dribble French onion soup down her front, Sandler is pitched head-long into a wooden trough. The number of pratfalls and dumb stunts the lead actors must execute throughout the film can surely be construed as cruel and unusual punishment. There’s even a kind of Greek (African, in this context) chorus led by Terry Crews (TV’s Brooklyn Nine-Nine), popping up to sing about what’s going on in the film – it starts out funny, but starts to grate after a while.

The script also has an unmistakably sexist slant to it: Lauren doesn’t know how to connect with her boys because she’s not a dude, and Jim treats his blossoming princesses as guys because… well, he is a dude. Of course Lauren helps Jim’s obviously not-ugly-at-all tomboy daughter Hilary (Bella Thorne) transform into a complete knockout, while Jim teaches Tyler (Kyle Red Silverstein) how to actually hit a baseball. It’s a simplistic and reductive view of parenting, to say the least.

But, if you’re willing to go with the flow on the (many) weaker parts of the film, Blended might very well end up taking you on an unexpectedly emotional journey. The dynamics within both families, such as they are, are very well-developed: Jim’s daughters, in particular, come across as very real young people. Jim’s youngest daughter, the adorable, precocious Lou (Alyvia Alyn Lind), can’t remember her mother at all, and so just yearns to have one – a reaction that stands in stark contrast to that of her middle sister Espn (Emma Fuhrmann), who tries her very hardest to keep her mother alive as an invisible friend. It’s a touch manipulative, sure, but nevertheless touches on the devastating truth of grief and how it affects children born just a few years apart. 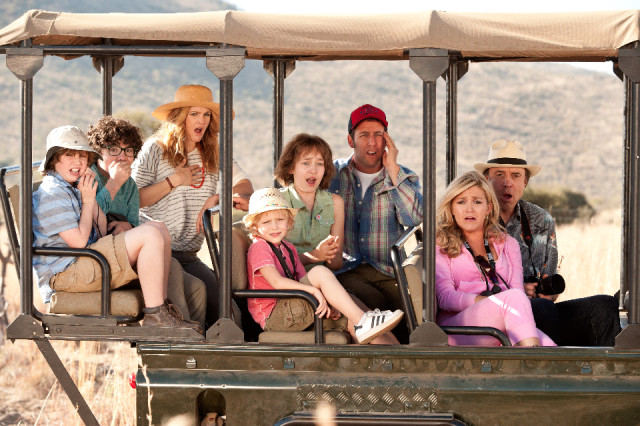 There’s something to be said, too, for the way in which Jim and Lauren wind up falling in love. It’s nice that the typical romantic-comedy clichés of sex, farce and misunderstanding don’t apply. Instead, they gain respect for each other as parents, first and foremost – which feels more realistic and credible, given where they both are in their lives. Children do change the dating game for their parents, and it’s nice to see that factor into this budding relationship in the way it does.

Of course, there’s no denying the chemistry that exists between Sandler and Barrymore. It’s served them well in their two previous collaborations – The Wedding Singer and 50 First Dates – and is present in full force throughout Blended. It’s nice to see them back together again, building a relationship with unexpected maturity and depth. There’s a little wish fulfilment going on by the end, sure, but the inevitable happy ending feels more hard-won and genuine than before.

In short: don’t go into Blended expecting a good film, much less a masterpiece. The script is too broad, too silly, and too predictable for that. But don’t close your heart off to it, either. Because there’s a lot of truth and a surprising reservoir of deep, powerful emotion lurking within its very flawed story.

Summary: A technically bad film made tolerable and effective by its characters and the surprising depth of its emotional power.