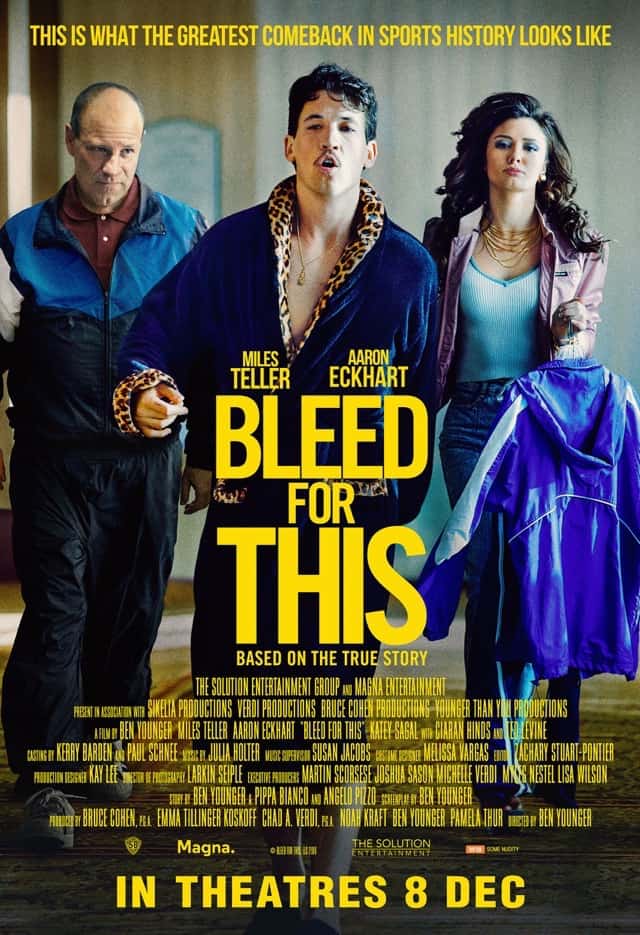 Everyone loves a good comeback tale, and this sports drama tells the true story of the comeback-iest kid who ever came back. World champion boxer Vinny Pazienza (Teller), holding titles in the lightweight and light middleweight classes, loses a 1988 fight to Roger Mayweather (Peter Quillin). Vinny’s manager Lou Duva (Levine) publicly declares that Vinny should retire, much to the ire of Vinny’s father Angelo (Hinds). Determined to continue boxing, Vinny trains under Kevin Rooney (Eckhart), who formerly trained Mike Tyson. Under Kevin’s supervision, Vinny moves to the junior middleweight division, becoming the champion in that weight class. It all comes crashing down after a car accident results in Vinny breaking his neck. Vinny is told that he might never walk again, but he is adamant that he can recover and continue boxing. With his large family, including his mother Louise (Sagal) and sister Doreen (Clayton) supporting him, Vinny takes the painful steps towards getting back in the ring.

Bleed for This is written and directed by Ben Younger, with Pippa Bianco and Angelo Pizzo receiving a ‘story by’ credit. Pizzo is a veteran of the sports drama genre, having written Hoosiers, Rudy and The Game of Their Lives. One would be forgiven for greeting Bleed for This with the reaction “what, another boxing movie?” After all, we’ve seen the likes of Southpaw, Creed and Hands of Stone within the last two years alone. Bleed for This does contain many beats that sports movie fans will find familiar, but the extraordinary nature of Vinny’s comeback and his refusal to accept that he would never box again are just enough to distinguish it from the pack. For the bulk of Bleed for This, Vinny isn’t fighting a physical opponent, but waging a mind-over-matter battle with a halo brace holding his spinal cord in place. While the imagery of Vinny post-accident is harrowing and there are wince-inducing moments aplenty, Younger keeps the tone relatively light and Bleed for This is never depressing.

In the past, Teller has been described as “doughy”, but he’s gotten into excellent shape to play Vinny. As with many a boxing movie protagonist, Vinny is brash, cocky and has self-control issues, but there is an underdog charm to him and the story ends up being, just as the poster proclaims, inspirational. Teller admirably commits to the part, and is thoroughly convincing when portraying Vinny in extreme pain. While it’s not as virtuosic a performance as the one Teller gave in Whiplash, it’s still compelling in its own right. That moustache is not a good look on him at all, though.

Eckhart affects his most drastic physical transformation to date to play washed-up trainer Kevin Rooney. Balding, paunchy and pitching his voice a little higher than we’re used to, Eckhart’s turn is entertaining and frequently amusing. While Sagal gets disappointingly little to do as Vinny’s mother, Hinds’ larger-than-life portrayal of Vinny’s father is fun. The performance is a little broad at times, but real-life patriarchs of Italian American families can often be boisterous. The father-son relationship provides some of the film’s more tender moments.

Besides crowd-pleasing boxing movie tropes, Bleed for This also serves up a healthy amount of early-90s nostalgia: notice the lingering shot on a can of Tab soda. In Singapore, the censorship board snipped out the sex scenes to get Bleed for This down from an M18 rating to an NC16. We reckon this doesn’t have a great effect on the story, even if it renders Vinny’s excessive lifestyle less obvious. The film’s predictability is overcome by a watchable, dedicated cast and director Younger’s conscious avoidance of leaden self-seriousness makes this an entertaining time.

Summary: If you subscribe to the “seen one boxing movie, seen them all” school of thought, you won’t find Bleed for This exceptional. However, both Miles Teller and Aaron Eckhart immerse themselves in their roles and the film sticks close to the real events.