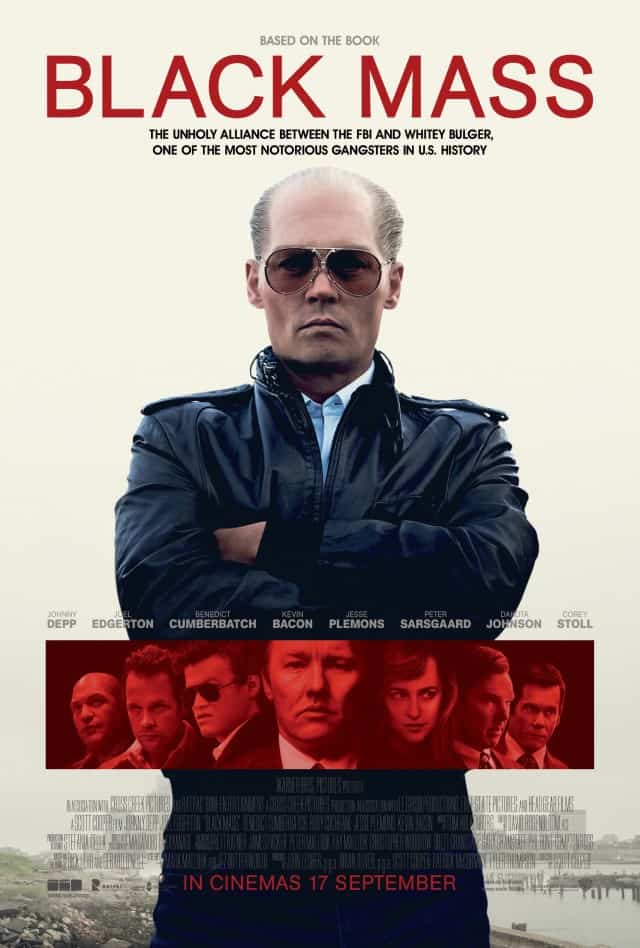 A “Black Mass” is a type of Satanic ritual, a dark inversion of the Catholic Mass. This true crime drama recounts the profane partnership between the FBI and one of the most notorious gangsters in United States history. James “Whitey” Bulger (Depp) is the head of the Irish-American Winter Hill gang in South Boston. His brother Billy (Cumberbatch) is a United States senator. Their childhood friend John Connolly (Edgerton), now an FBI agent, approaches Whitey with the offer of becoming an informant in order to take down the rival Angiulo crime family. As Whitey’s clout increases, he begins to be more brazen in his criminal activities, with his fingers in everything from drug trafficking to a Jai alai betting racket to funding the Irish Republican Army, almost casually killing anyone who crosses him. Whitey and his partners Stephen Flemmi (Cochrane), Kevin Weeks (Plemons) and Johnny Matorano (W. Earl Brown) continue their criminal reign of South Boston unchecked, benefitting from a deal with the Feds that seems too good to be true.

Black Mass is based on the book Black Mass: Whitey Bulger, the FBI and a Devil’s Deal by Boston Globe reporters Dick Lehr and Gerard O’Neill. The “unholy alliance” between two childhood friends which would end up having untold ramifications is one of the most morbidly intriguing organized crime stories in recent memory. “Southie kids, we went straight from playing cops and robbers on the playground to doing it for real in the streets,” Kevin Weeks says in the police interview framing device. Working from a screenplay by Jez Butterworth and Mark Mallouk, director Scott Cooper has crafted a crime drama in the mould of Scorsese’s genre-defining mob movies. Black Mass is bleak but never boring to look at, thanks to Masanobu Takayanagi’s cinematography which is slick but not flashy. Cooper stages several moments that are bubbling over with almost unbearable intensity. It is often downright terrifying and it boggles the mind to think how long Whitey’s criminal activities were allowed to go on for.

Post-Jack Sparrow, it has been difficult to take Johnny Depp very seriously, even with his three Oscar nods. You know it, we know it and Depp himself knows it too. Suffice it to say that this is a far cry from Mortdecai and is the best Depp has been in years. Great acting is about disappearing into the part, and with the help of special effects makeup designed by Depp’s oft-collaborator Joel Harlow, he does indeed. Cooper hired some of Whitey’s former associates as consultants and they looked at footage of Depp as Whitey, simply commenting “that’s Whitey.” Much of Depp’s later work has been characterized by traipsing about with wild abandon, so the subtle, understated quality he brings to bear with this performance is welcome. He convincingly essays a master manipulator, a savvy criminal with an unpredictable streak and delivers a searing, disturbing turn as Whitey in what is definitely a high point in his career.

While the film is primarily Depp’s to carry, there is a vast number of supporting players. Edgerton balances out Connolly’s self-confident air with his inner conflict between loyalty to a boyhood pal and duty to upholding the law, as his turning a blind eye to Whitey’s criminal exploits eventually snowballs. Edgerton does have a tendency to play the role a little broad, but he does bring a good deal of heart to the role. Replacing the initially-cast Guy Pearce, Benedict Cumberbatch gets precious little to do as Whitey’s brother Billy, and how Whitey could get away with so much when his brother was a senator is a plot point that is never explored to a satisfying extent. He makes a valiant attempt at a Boston accent but struggles to nail it. Kevin Bacon kind of floats in and out of the film as Connolly’s boss, spending most of his screentime haranguing the agent under his charge. As is the case with many mob movies, we don’t spend a lot of time with the female characters, but perhaps that’s just a reflection of the true story. Both Dakota Johnson and Julianne Nicholson get to share excellent scenes with Depp though, one of which is skin crawlingly creepy.

With its framing device of Whitey’s associates being interviewed by the police years after the fact, the film can come off as episodic rather than sweeping and involving, but it is riveting nonetheless. Director Cooper is clearly a student of the mob movie subgenre and while Black Mass owes a great deal to the work of Scorsese and his ilk, it doesn’t come off as mere mimicry, the violent consequences of this “unholy alliance” laid bare.

Summary: A true crime biopic that gets under one’s skin, Black Mass may not reach the loftiest heights of the mob movie subgenre but it boasts a stellar, terrifying turn from Johnny Depp.