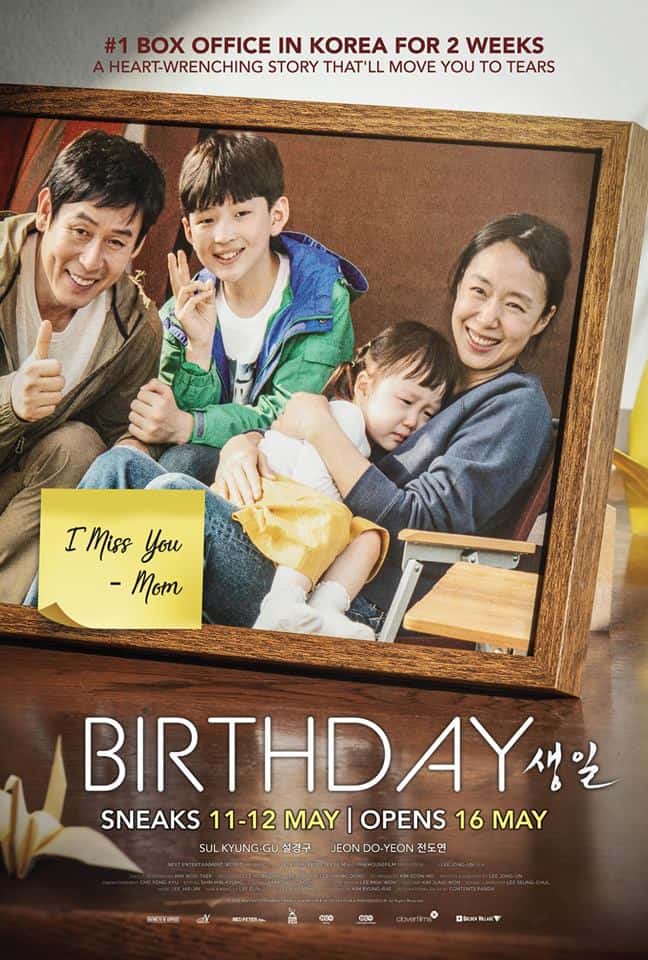 The Low-Down: The first and only commercial feature about the 2014 Sewol Ferry disaster stars multiple best-actress winner Jeon Do-yeon as the heartbroken mother of a fictional family who lost their son in the shipwreck. Alongside her is Seol Gyung-goo, also another big award-winning veteran, as the cold and absent father wanting to make amends. Birthday is a heart wrenching tearjerker that will make even the strongest sob. Not because it manipulates your emotions but the cast genuinely and carefully convey the pain and devastation faced by the parents of the hundreds of unfortunate young lives lost in the tragedy.

The Story: Three years after the Sewol Ferry incident, Jeong-il (Seol) returns to Seoul from his Vietnam business. His wife, Soon-nam (Jeon), doesn’t open the door for him, and his daughter, Ye-sol (Kim), is afraid of getting close to him. It’s no wonder — this is the first time in 5 years that Jeong-il stepped foot in Seoul and he wasn’t there when his son, Soo-ho (Yoon), died. Now, it’s up to Jeong-il to mend the wounds and his relationship with his broken family. Yoon appears in flashbacks, dreams, and memories of his family members, close friends, and relatives, giving us bits and pieces that make up this well-loved boy who, unfortunately, got taken away too soon, among the many young lives claimed in the tragedy.

The Good: Unlike typical disaster movies that magnifies the victim’s pain, Birthday shows the challenges faced by the people around the victim, shedding light on the reality of the unsung heroes behind the scenes. Whenever Birthday causes you to be dewy-eyed, it’s never low handed — you genuinely feel for the family, friends, and everyone who loved Soo-ho. How director Lee and crew manage to give so much flesh and blood to Soo-ho’s character with so little screen time is an artistic success seldom seen in modern cinema. The writing, dialogue, and storytelling — executed by not just the talents but also the film and editing crew — piece a narrative with which anyone can resonate. You know a good touching story when you hear snuffs all around the theatre, including your own without even realizing.

The Not-So-Good: There are very little to nitpick, but if it’s anything that Birthday lacks, it’s tying the strings of some minor plot details. Nothing too major but for international audiences who are not too familiar with the Sewol Ferry disaster and perhaps the social outrage, they might not catch certain plot points until the third act. That said, that is if you really want to be picky.

Knock-Out Performances: Jeon is the clear standout because of her character and scenes, but Seol does exceptionally well too in conveying so much just through subtle facial expressions. Younger cast members who play various friends of Soo-ho deserve praise as well, particularly the adorable pre-teen Kim and her amazing portrayal of young Ye-sol grappling with her elder brother’s death.

Watch Out For: The third act where everyone gathers for the first time since the incident to commemorate Soo-ho’s birthday. Get ready for a flood of emotions and be surrounded by sniffles and quiet sobs in the theatre as the movie builds up to this point.

Recommended? Yes, whether you’re familiar with the Sewol Ferry disaster or not, whether you’re a parent, child, or anywhere in between, Birthday explores grief in a genuine and relatable fashion that doesn’t feel forced or manipulative in any way. The movie nods to those who have lost loved ones in tragedies and educates the people around them about the mental struggles the former goes through. Birthday might be about a Korean event, but the emotional journey it brings you along is universal.