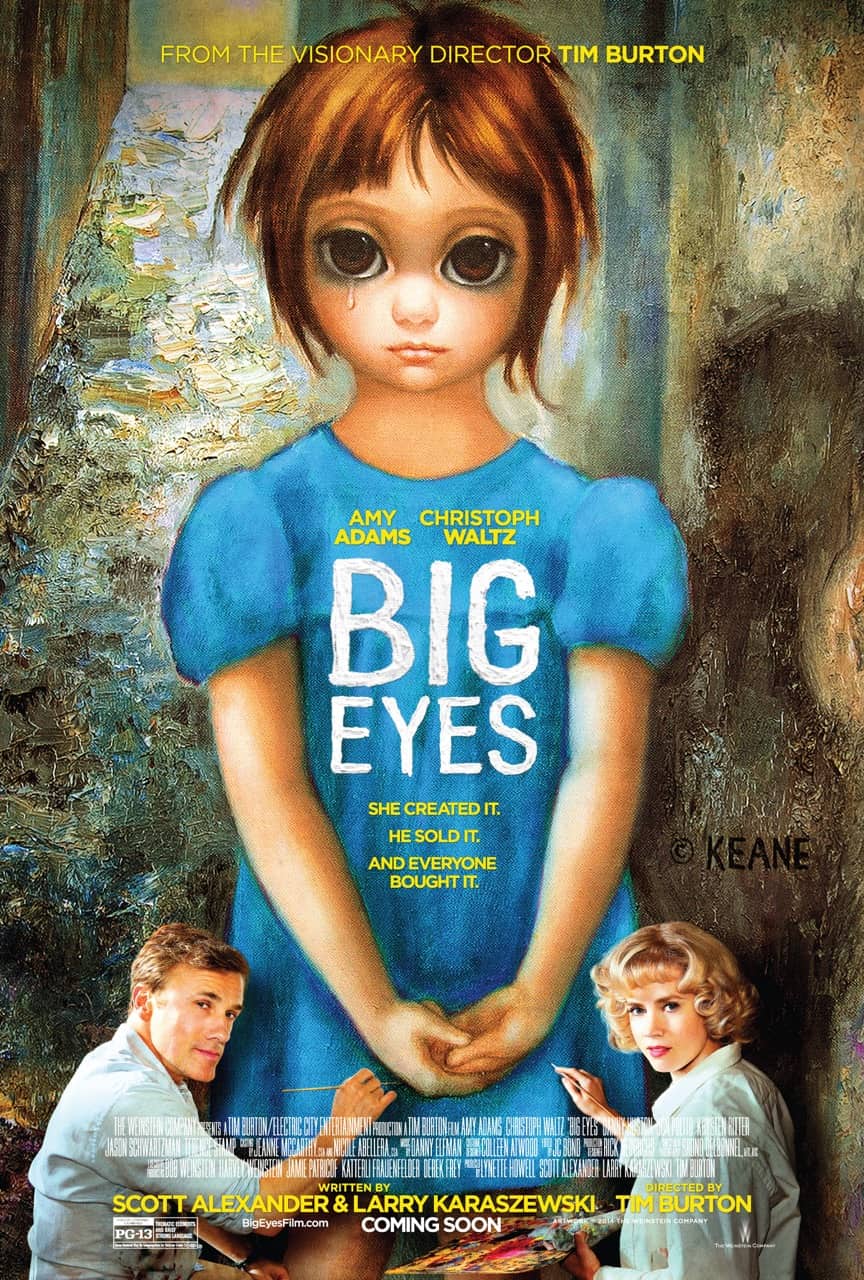 In the 1960s, Margaret Keane’s hypnotic paintings of doe-eyed waifs captured the imagination of the world but, for a long time, nobody knew the dark truth behind these depictions of innocence. After separating from her husband Frank, Margaret (Adams) takes her young daughter Jane (Madeleine Arthur) to San Francisco. There, she meets and quickly falls hard for Walter Keane (Waltz), seemingly also a passionate painter. Margaret and Walter marry and, after Margaret’s unique “Big Eye” paintings garner attention, Walter begins to take credit for them. Soon, the paintings are everywhere, mass-reproduced and sold in supermarkets and gas stations, with Walter making television appearances and hobnobbing with celebrities, everyone believing him to be the true artist. As Walter grows more domineering, making Margaret fear for her own safety, she finally tells the world the truth as the couple battles it out in court for proper credit. 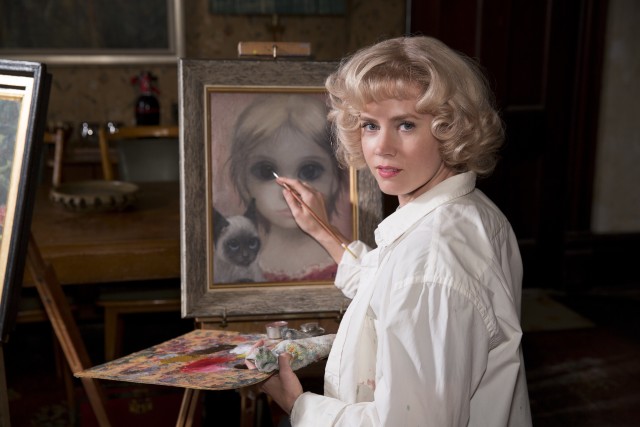 Big Eyes marks director Tim Burton’s first biopic since 1994’s Ed Wood, re-teaming him with that film’s writers Scott Alexander and Larry Karaszewski. It’s been repeatedly noted that this is Burton’s first live-action film since 1996’s Mars Attacks! without either Johnny Depp or Helena Bonham Carter. A project like Big Eyes is exactly what Burton needs and it is perhaps not entirely coincidental that this film about artistic integrity comes from a director once lauded as a fresh, unique voice but who has become something of a parody of himself. The film still bears many of Burton’s signature touches and the heightened stylisation proves to be a double-edged sword even when it’s consciously scaled down. While the saturated colour palette and the Stepford Wives-style depiction of a suburban idyll that becomes a personal prison add panache to the proceedings, they also hamper the authenticity of the true story. 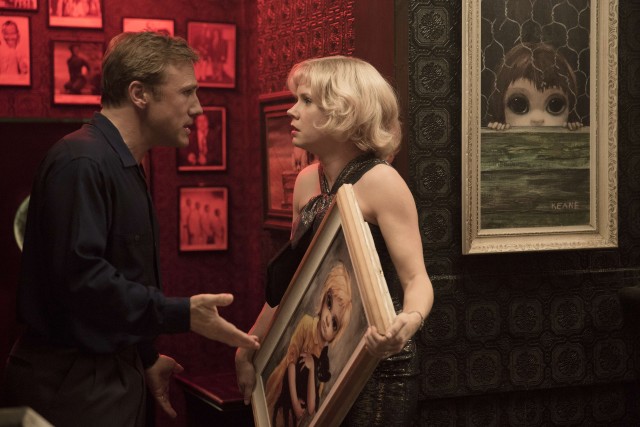 We’ve all heard stories of artists being taken advantage of and the Margaret and Walter Keane case is one of an artist being taken advantage of in the extreme. Burton establishes a sense of unease throughout and writers Alexander and Karaszewski manage to play on the audience’s knowledge of how things went down in general, such that we know where it’s all headed but anticipate and dread it in equal measure as Walter’s lie snowballs. Production designer Rick Heinrichs and Burton’s usual costume designer Colleen Atwood create an immersive, period-accurate milieu tinged with that kitschy Burton flair. The music video for Soundgarden’s Black Hole Sun comes to mind. While the film’s tone is not as uneven as it could’ve been, one still gets the feeling that characters such as Margaret’s friend DeAnn (Ritter) and snobbish gallery owner Ruben (Schwartzman) have been written in only to provide requisite comic relief in what really is an emotionally-heavy film, though it has been described as a “comedy-drama”. 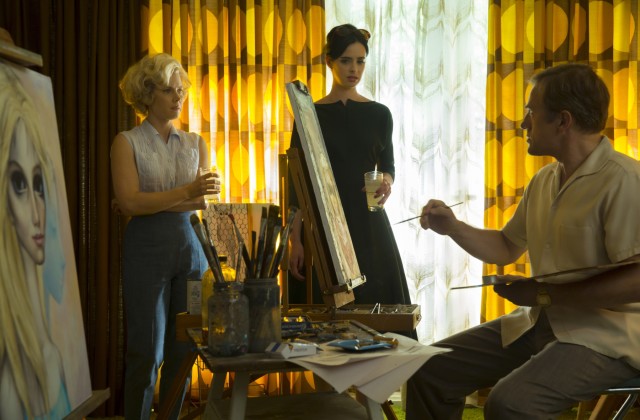 Adams’ name has popped up on various “Oscar snubs” lists and it’s easy to see why. Adams ably embodies the quiet dignity of the character, shying away from showy bursts of emotion, her performance all the more affecting for it. An artist’s personal attachment to his or her work is a difficult sentiment to convey, but the way Adams plays it, one really feels that, when credit for the Big Eye paintings is snatched from Margaret, it’s as if one of her own children has been taken from her. The film makes no bones about being a feminist statement and Adams’ Margaret is very sympathetic and easy to root for. 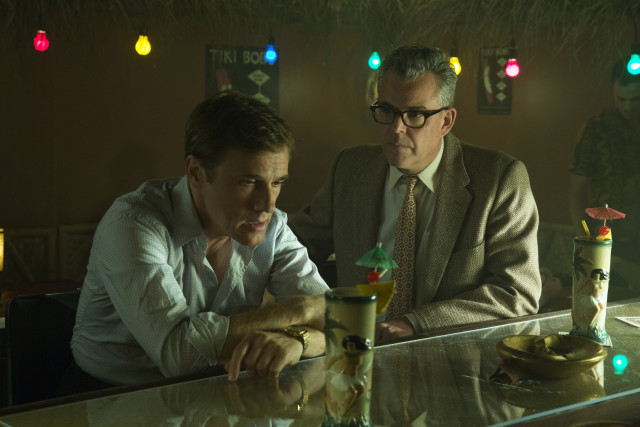 Waltz brings his trademark wildfire charisma to the role of Walter Keane, effortlessly playing a smug, charming manipulator with flair to spare. While magnetic and watchable, Waltz does veer dangerously close to the cartoony side of things when Walter lashes out at Margaret, as if he’s practising for his upcoming Bond villain role. His portrayal of the abusive, controlling husband here is near-identical to the performance he delivered as the abusive, controlling husband in Water For Elephants. Journalist Dick Nolan (Danny Huston) observes “Subtle doesn’t sell”, and Waltz seems to have taken that to heart. All that said though, he’s a much better fit for the part than Ryan Reynolds, who was attached to the film at one point, would have been. 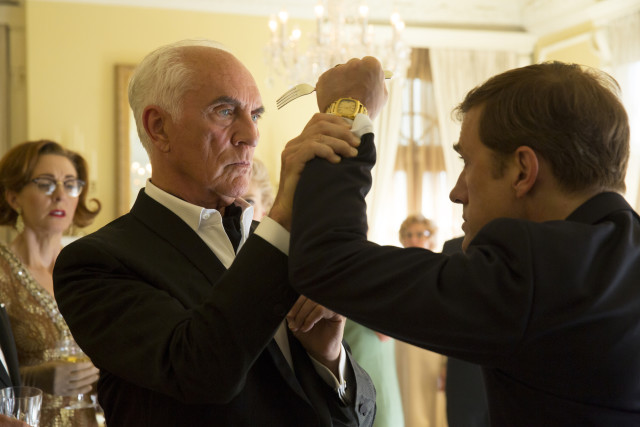 Big Eyes sets itself apart from the prestige biopic pack with a deliberately cloying aesthetic, director Burton expressing the idea that ugliness can lurk beneath the surface of beautiful things. In focusing on Margaret and Walter’s relationship, Big Eyes seems to side-step challenging discussions about the role art plays in society which, when viewed through the lens of a period film, could have been especially thought-provoking. While impactful and moving, this approach strips the material of some of the rawness and honesty it requires. Ultimately, Big Eyes doesn’t dig deep enough.

Summary: A domestic abuse drama tinged with queasy stylisation, Big Eyes has Tim Burton deviating from his now-tired formula and boasts Amy Adams in top form, but suffers slightly from being too simplistic.