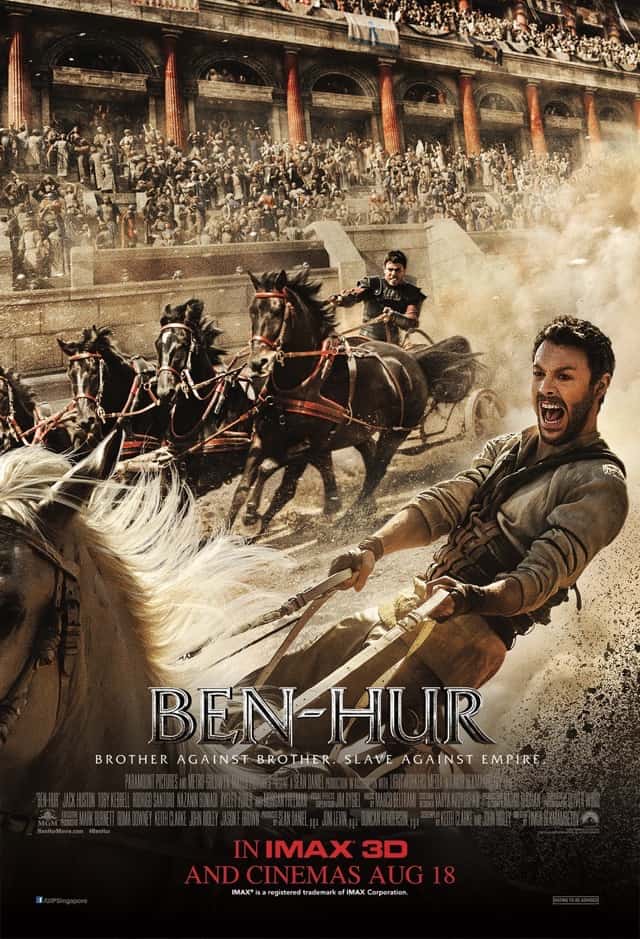 The epic tale of Ben-Hur is told yet again in this, the fifth film adaptation of Lew Wallace’s 1880 novel. Judah Ben-Hur (Huston) is a Jewish prince residing in Roman-occupied Jerusalem during the 1st Century A.D. Judah’s adoptive brother Messala (Kebbell) becomes an officer in the Roman army, and after Judah is falsely accused of an assassination attempt, the brothers become enemies. All that Judah holds dear, including his mother Naomi (Zurer), sister Tirzah (D’Elia) and Esther (Boniadi), a servant with whom he has fallen in love, is taken from him. After being arrested by the Romans, Judah encounters Jesus (Santoro), a carpenter who preaches compassion and love. Judah becomes a slave in the galley of a Roman vessel, and years later, has his chance for revenge against Messala. Judah trains under the wealthy Sheik Ilderim (Freeman) to become a charioteer, facing off against Messala in the arena.

The 1959 Ben-Hur film, directed by William Wyler and starring Charlton Heston, is widely venerated as a classic of American cinema, and remaking it seems to be a fool’s errand. Sequels and remakes have proven profitable, and nothing’s off-limits, so here we are with another big-screen version of Ben-Hur. Director Timur Bekmambetov is known for favouring style over substance, coming into prominence with the Russian horror fantasy blockbusters Night Watch and Day Watch, and following that up with Wanted and Abraham Lincoln: Vampire Hunter. There are still plenty of dramatic scenes, but they tend to carry little emotional weight, one getting the impression that Bekmambetov is spinning his wheels until the next big set-piece.

The action sequences in Ben-Hur are meant to be its selling point, with Bekmambetov reining in (pun intended) the indulgences he’s displayed in his other films. Alas, it seems chariot races in cinema have forever been ruined by The Phantom Menace, and this reviewer couldn’t help but be reminded of that infamous sequence, which was itself inspired by the 1959 Ben-Hur. Go-Pro camera shots, reminiscent of those that show up in modern car racing movies, detract from the sequence’s authenticity rather than enhancing it. Bekmambetov insists that he tried to shoot as much in-camera as possible, but there’s no denying the phoniness of the computer-generated effects. This is evident in the ship battles even more than in the chariot race. Despite its $100 million budget and location shooting in the historical Italian city of Matera, Ben-Hur often looks cheap.

There’s definitely an attempt made at fleshing out the title character. Judah’s arc, which begins with him as an entitled nobleman ambivalent to the struggles of his countrymen, sees him put through the wringer as a slave, and concludes with him questioning his drive for vengeance at the foot of Jesus’ cross, does have its impactful moments. Huston gives it his best shot, but there’s just something about the actor which makes it difficult to buy him as a truly heroic character – it’s as if his face is always a moment or two away from scrunching up into a snarl. It makes sense that Huston was originally considered for the role of Messala. The heart-warming plot point of Judah saving and eventually being adopted by Roman warship commander Quintus Arrius is excised here.

Thankfully, Messala is not characterised as a moustache-twirling villain, with the possibility for reconciliation between him and Judah never entirely out of the question. The film strains too hard in trying to convince audiences that the two really started out as best buds, with a friendly chariot race between the two early on that’s pretty much ripped from The Prince of Egypt. Santoro is fine as Jesus, who is given a slightly larger role here than in the 1959 film. Alas, it seems Jesus had more impact when there was an air of mystery to Him – the famous scene in which Jesus offers a parched Judah some water had considerably more impact in the 1959 version, when we only saw Jesus from behind and He didn’t say a word. In this film, Jesus’ mini-sermons seem tacked on.

The emphasis is placed on the bond and eventual rift between Judah and Messala, leaving the rest of Judah’s relationships somewhat under-developed. There isn’t enough to the women in Judah’s life for us to care about, with Huston and Boniadi in particular sharing little chemistry. The film’s inability to convey the passage of time is also a factor. Chyrons reading “3 years later” or “5 years later” pop up, but even when Judah sports a scraggly beard and scars from repeated flogging, it doesn’t seem like more than a few months have elapsed. As such, it’s hard to buy the desperate longing Judah has for his beloved Esther.

Freeman can always be counted on to lend some gravitas, but those dreadlocks do undercut his screen presence. While we don’t miss the brownface sported by Hugh Griffiths to play Ilderim in the 1959 version, we do miss the effusive warmth and light-heartedness he brought to the part, which is entirely absent from Freeman’s stern, serious Ilderim.

Ben-Hur isn’t a travesty, but it’s every bit as unnecessary as anyone thought the moment this remake was announced. This reviewer feared that any and all character development would be jettisoned for stylistically overblown action, and while the story of Judah Ben-Hur is abridged, it’s mostly intact. The film is pervaded by the feeling of going through the motions, and it’s not long before the wheels come off this chariot.

Summary: This remake is occasionally sincere but generally uninspired, its dramatic moments cheesy rather than potent and its spectacle underwhelming rather than awe-inspiring.