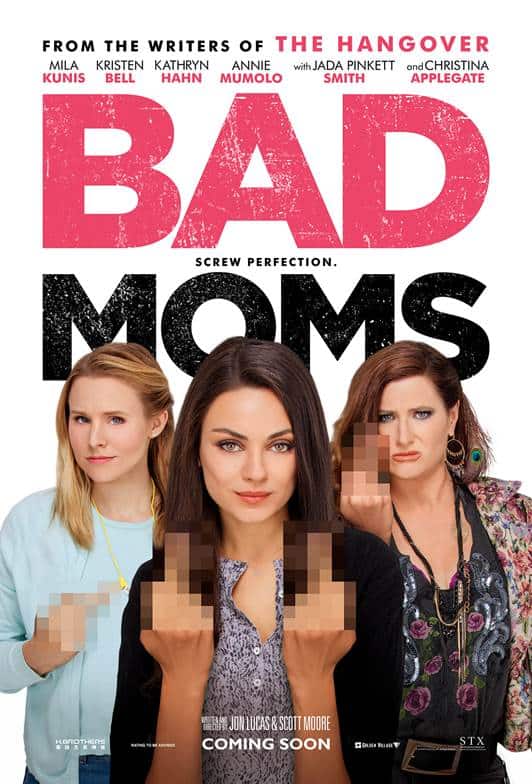 One would think if anyone knew a thing or two about letting one’s hair down, it would be the screenwriters of The Hangover. Jon Lucas and Scott Moore have turned their attention to the demographic of women who feel the pressure to be perfect mothers; juggling careers, caring for their children and obligations as part of the Parent-Teacher Association (PTA). Amy Mitchell (Kunis) is on the verge of a nervous breakdown. In between working at a coffee co-op and ferrying her kids Jane (Laurence) and Dylan (Anthony) to and from school and various co-curricular activities, she’s just about had enough of being taken for granted. Amy befriends brash single mum Carla (Hahn) and the mousy, awkward Kiki (Bell), and together they make a pact to rebel against established standards and be ‘bad moms’ for once. This earns the ire of Gwendolyn (Applegate), the PTA president who rules over the other parents with an iron fist. Always accompanied by her lackeys Stacy (Smith) and Vicky (Mumulo), Gwendolyn becomes vindictive towards Amy and her newfound friends when Gwendolyn finds her authority threatened.

Teaming up actresses as funny and entertaining as Kunis, Bell and Hahn and setting them loose should’ve yielded far less disappointment than Bad Moms delivers. Above anything else, this feels lazy and insincere. Clichés and stereotypes flood the film, which begins with Kunis’ Amy addressing the audience in voiceover. “He’s a successful mortgage broker, but sometimes he feels like my third child,” Amy says of her schlubby husband Mike (David Walton). Many of the jokes sink like a stone, and the cast gets to improvise a little, but the results are mostly leaden.

The R-rated comedy subgenre of “ladies who can be as lewd and callous as the guys” is already growing tired. It’s difficult to shake the sense that the many, many jokes about genitalia both male and female are a futile attempt to make a mostly safe comedy shocking. The one scene of full-frontal nudity, built around a pubic hair visual gag, is wholly gratuitous. There’s also a miscalculated attempt at diversity, with Muslim women wearing headscarves depicted attending a party with free-flowing booze and weed.

Kunis is reasonably convincing as a woman who had her first child at 20 and whose entire life has been consumed by work and kids since then, and she’s well able to convey the character’s understandable frustrations. Bell plays the maladroit, square oddball and it registers as a severe case of miscasting, since she doesn’t get to display her usual effervescence. Most of the film’s dirty jokes come courtesy of Hahn’s Carla – the actress is considerably funnier when she’s more nuanced, and the confident, aggressive and overtly sexual character is gratingly one-note. Applegate bites into the part of the control freak queen bee with entertaining aplomb, but Gwendolyn is yet another example of how the exaggerated characterisation is more annoying than it is actually funny. While Anthony doesn’t get too much to do as Amy’s son Dylan, Laurence manages to be amusing as Amy’s high-strung daughter Jane. 12-year-old Jane’s preoccupation with getting into an Ivy League college does hit a little close to home. And naturally, there’s a requisite attractive guy in the form of Jay Hernandez’s Jessie, who is bluntly referred to as the “Hot Widower” amongst the mums. Classy.

There’s supposed to be a heart at the centre of the bawdy gags and copious swearing, but Bad Moms is unable to blend aww shucks sentimentality with its production line crudeness. The main-on-end titles, which feature several surprise guest appearances, are obviously meant to tug at the heartstrings, but this saccharine glop at the end is blatantly manipulative. Lucas and Moore toss in a vertigo-afflicted dog – the device of a pet with a medical condition that is played for laughs is such a hack move. There’s certainly a statement to be made about the societal expectations foisted on mothers and children, and the relatable premise will resonate with any number of overworked mums. It’s too bad then that any sliver of poignancy is buried deep beneath sludgy layers of filth.

Summary: Funny actresses are left floundering in this pointlessly crass comedy, which misses the “rude but sweet” mark by a fair bit.