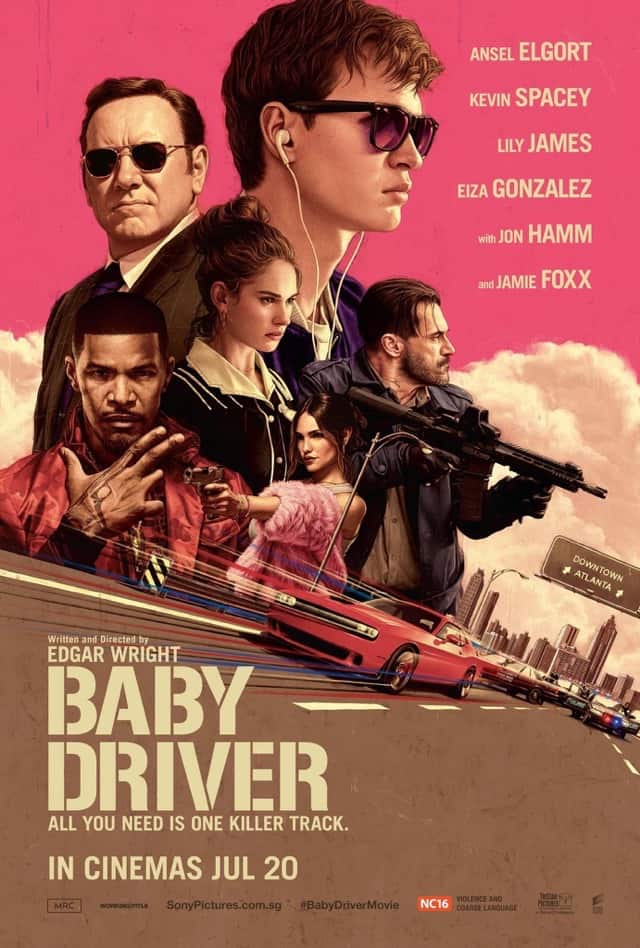 The director of the Cornetto trilogy and Scott Pilgrim vs. The World takes the driver’s seat, and he has the Wright of way. This action comedy follows Baby (Elgort), a getaway driver who is a veritable prodigy behind the wheel. After surviving an accident in his childhood, Baby suffers from tinnitus, and to drown out the ringing noise, listens to pre-selected music on his iPod. Baby is in the employ of criminal mastermind Doc (Spacey), whose gang of bank-robbers includes miscreants like Buddy (Hamm), Buddy’s wife Darling (González), the violent and unpredictable Bats (Foxx) and the surly Griff (Bernthal). The latter two aren’t especially fond of Baby, but Doc insists on keeping Baby as his getaway driver, even as Baby wants out. Baby fears that his foster father Joseph (Jones) and Debora (James), the diner waitress with whom he strikes up a relationship, are endangered by his criminal activities. While he dreams of hitting the open road with Debora next to him, Baby is kept under Doc’s thumb. He might be the world’s greatest getaway driver, but can he escape from his shadowy employer?

Baby Driver has long been gestating in writer-director Wright’s mind. After first coming up with the idea in 1994, Wright directed a music video for Mint Royale’s “Blue Song”, featuring Noel Fielding as a getaway driver with an affinity for music. Wright has become known for his films’ dynamic, sometimes quirky style, and the comic energy with which he executes them. Baby Driver is supremely entertaining, a funny, romantic thriller crafted with the utmost care. It’s a little like a souped-up version of Carpool Karaoke, in that each action sequence is set to music.

Baby Driver moves with an effortless fluidity; Wright tapping on choreographer Ryan Heffington to help sync the actors’ movements to the soundtrack. Atlanta, Georgia, often doubles for other locations, but in Baby Driver, the city gets to play itself, becoming an ideal backdrop for thrilling, inventive car chases. Baby Driver features such brazen stylistic choices as cutting a gunfight to a drum solo; editors Paul Machliss and Jonathan Amos giving the picture a rhythm that matches the vibe of the story Wright is trying to tell to a tee.

With Baby’s personal mix of songs helping him to zone in while he works, while carrying sentimental significance for him, there are traces of Star-Lord’s awesome mix from Guardians of the Galaxy. It turns out that Wright consulted director James Gunn to make sure there wasn’t any overlap between the tracks featured in Baby Driver and those used in Guardians of the Galaxy Vol. 2. Artistes like the Jon Spencer Blues Explosion, The Commodores, T. Rex, Beck, Martha and the Vandellas and, of course, Simon and Garfunkel all show up on the soundtrack, making this something of a hybrid jukebox musical action movie. It’s a clever, unique effect.

Elgort’s Baby is one of the more memorable original protagonists in recent memory. There are elements to him we’ve seen before in many a crime thriller: he’s got a tragic past, is embarking on the fabled ‘one last job’, has a parental figure who disapproves of his job, and falls in love with a woman from whom he tries to hide his unlawful ways. Even so, there’s a resonant freshness to the character, as if Wright has remixed said elements. Baby is laconic and withdrawn, existing in his own world created with the assistance of music. ‘Tough’ isn’t the first adjective that springs to mind when describing Elgort, but Baby exudes toughness of a non-traditional sort. The character is roguish, charming and endearing with Elgort having to try too hard at all.

The film’s supporting cast is stacked with talent. James exudes a somewhat old-fashioned girl-next-door sweetness, and while the romance between Baby and Debora unfolds predictably enough, it is still achingly romantic. Emma Stone was initially cast in the role, but left due to scheduling conflicts with La La Land. The character isn’t given the greatest amount of agency, and for most of the film remains an observer, but she plays a crucial role in the movie’s conclusion.

Spacey is Spacey: slyly terrifying and having the time of his life, while displaying commendable restraint. Hamm, Foxx and Bernthal all have their moments, with Foxx being especially easy to dislike as a bank robber who is instantly antipathic towards Baby. The characters who surround Baby are over-the-top, but that never undercuts their capability to be truly terrifying. By the film’s climactic confrontation, Baby Driver dispenses with the humour, and that sequence is intense and brutal. It’s a little jarring, but that turn is mostly well-earned. CJ Jones, who plays Baby’s kindly deaf foster father Joseph, is deaf in real life and is an activist for deaf awareness causes.

Baby Driver is the work of an auteur at the top of his game, with Wright’s stamp on it from beginning to end. The filmmaker makes numerous canny, inspired decisions, and pulls them off with stunning aplomb. Instead of coming off as smug and self-indulgent, it packs in a great deal of heart, feeling polished yet personal. It’s a deliriously good time that’s also deliriously good filmmaking.

SUMMARY: Edgar Wright fires on all cylinders, creating a superb slice of entertainment that’s a visual and aural delight. Baby Driver is also the best showcase for Ansel Elgort’s star power yet.