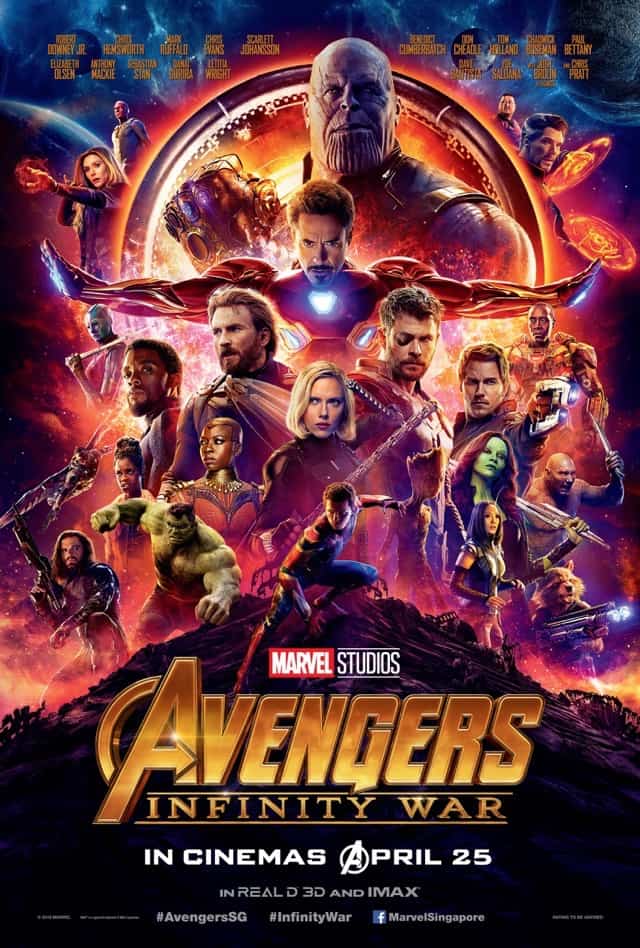 Over the past decade, Marvel has earned itself the benefit of the doubt. The studio has consistently delivered smart, funny, brave films that both embrace and transcend their comic-book origins. The 18 blockbuster movies produced since Iron Man first blasted off into the stratosphere in 2008 have not only reinvented superhero films as a genre – they’ve helped to legitimise it. Indeed, Marvel’s two most recent films – Thor: Ragnarok and Black Panther – have received the kind of accolades usually reserved for edgy arthouse flicks.

And yet, it’s perfectly reasonable to be apprehensive about Avengers: Infinity War. This is a blockbuster film that’s been ten years in the making, its plot hinted at and scattered throughout 18 other movies. It features 30 or so characters, each with their own complex backstories and motivations. And all of them are coming together in a bid to stop a giant purple alien dude from destroying the universe. It sounds ridiculous, and feels impossible. 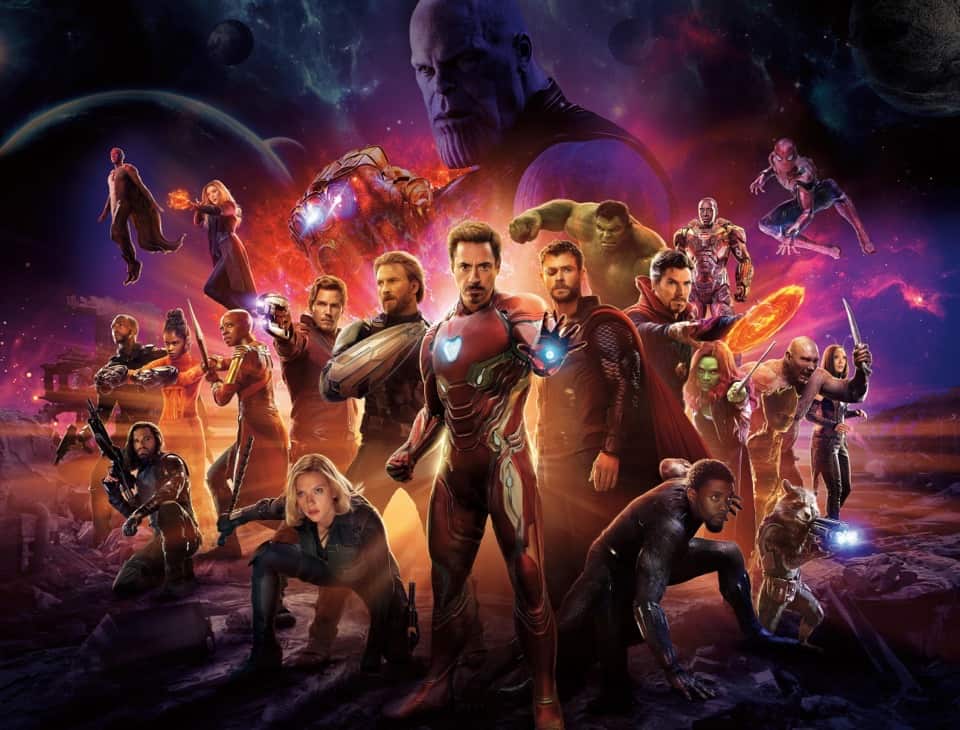 But that’s precisely what makes the final product such a monumental achievement. Masterfully directed by Anthony and Joe Russo, Infinity War is bold, brainy filmmaking at its very best: the kind that will lift your spirits, blow your mind and shatter your soul – occasionally in the same scene. It demonstrates on an epic scale what Marvel has known all along: that special effects and tightly choreographed action are there to serve the story. For all its blockbuster spectacle (and there’s almost too much of that), the film works because it’s anchored by the heart, humour and humanity of its characters.

The film’s basic plot is simple: Thanos (played via motion-capture by Josh Brolin), intergalactic purveyor of death and destruction, has long been on the hunt for the six Infinity Stones that will give him complete control over the elemental building blocks of the universe. He dispatches his acolytes to Earth to retrieve the Time Stone, currently in the possession of Dr. Stephen Strange (Benedict Cumberbatch), and carve the Mind Stone out of the forehead of Vision (Paul Bettany). It’s a literal existential threat so terrifying that all the heroes we’ve come to know and love – from the Avengers to the Guardians of the Galaxy – must put aside their differences and unite against a common foe. 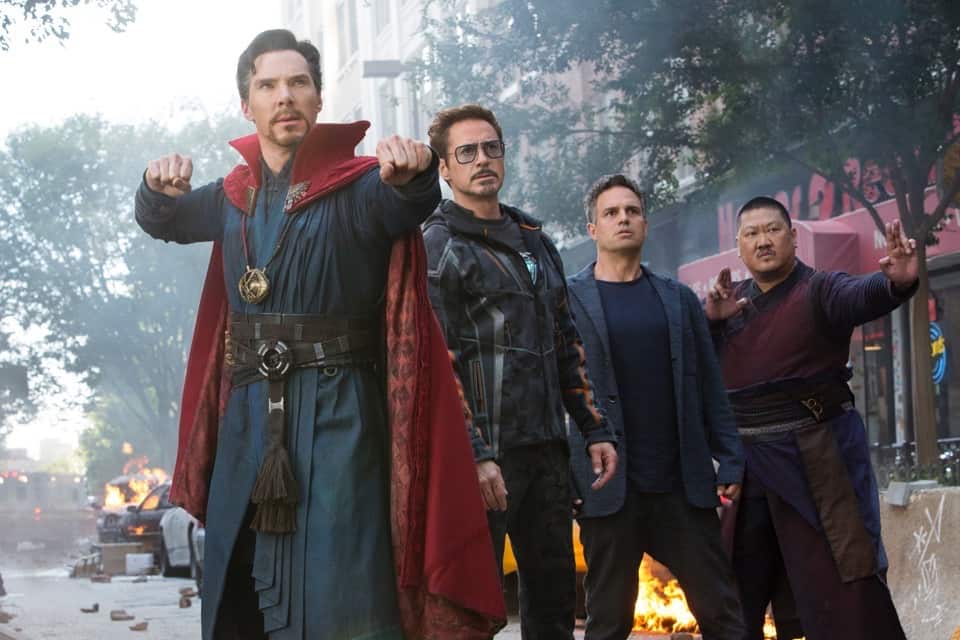 From the outset, it’s immediately clear that neither the film’s directors nor screenwriters (Christopher Markus and Stephen McFeely) are interested in playing it safe. Most other superhero films are bled of high stakes – the hero in the title might suffer untold trauma, but it’s a super-safe bet that he or she will make it to the end alive. There’s no such guarantee here. Within the first ten minutes, we are confronted with the dark, twisted depths to which Thanos and his acolytes in the Black Order will sink in order to achieve their goals. Death, as well as genuine loss and sacrifice, is intrinsic to the narrative drumbeat that drives Infinity War ever forward, and the film is all the better for it.

That’s not to say the movie is a morbid and depressing experience. What’s so impressive about Infinity Wars is how it expertly juggles its constantly shifting tones and moods. When it’s funny (and it very often is), it’s deeply, truly funny. The film finds maximum joy in flinging characters together with merry abandon, mixing and matching ones you’d never have expected to share scenes or trade banter. Peter Quill (Chris Pratt) is floored by Thor’s (Chris Hemsworth) godly muscles. Bruce Banner (Mark Ruffalo) is charmed by the wit and intelligence of Shuri (Letitia Wright). And it’d be impossible to not be utterly delighted by Peter Dinklage’s inspired cameo. It’s a blithely tongue-in-cheek sensibility shared by Marvel’s best comic books, which understand that humour can make you care when it really counts. 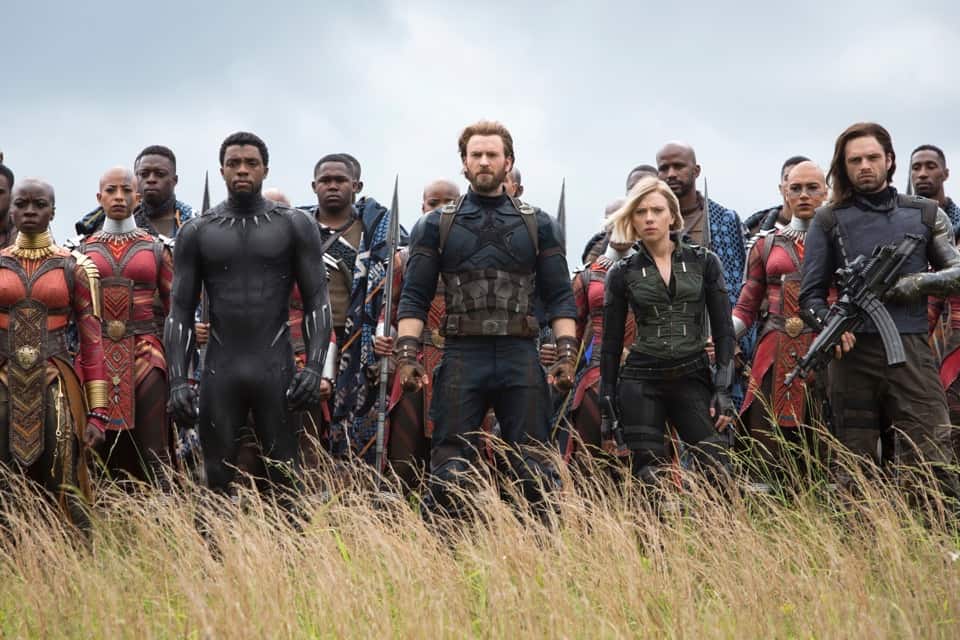 And, boy, does Infinity War make it count. There are many heartbreakingly human moments threaded throughout the film: from the charming surrogate father-son dynamic shared by Tony Stark (Robert Downey Jr) and Peter Parker (Tom Holland), to the undeniable love that ties Vision and Wanda Maximoff (Elizabeth Olsen) together. In many ways, the film stands as a testament to the human capacity not just to love, but to love fiercely and beyond all logic. It’s right there when the unfailingly noble Steve Rogers (Chris Evans) declares, “We don’t trade lives”, even when giving up one could save billions. 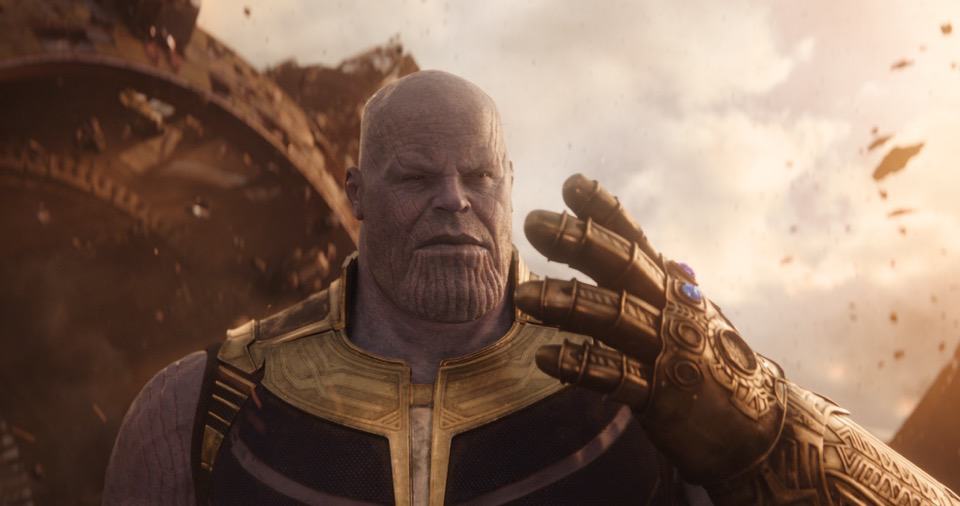 There’s even a chilling echo of it in Thanos himself. A lesser film would have turned Thanos into a one-dimensional villain, much the way he’s all monster and maniac in the comic books. In Infinity War, however, Thanos’ end goal is surprisingly relevant when it comes to thinking and talking about the staggeringly overpopulated world in which we live today. There is, as it turns out, method to Thanos’ madness. It makes the tragic twists and turns in his relationships with his estranged adopted daughters, Gamora (Zoe Saldana) and Nebula (Karen Gillan), all the more unsettling.

For the most part, Infinity War does justice, too, to the many heroes who have been assembled for the film. The Russo brothers displayed great skill at interweaving multiple perspectives and character trajectories in Captain America: Civil War, and they do so again here, with twice as many characters. Even the most minor of supporting players, like Don Cheadle’s James Rhodes/War Machine, are given story beats that land. It helps that Marvel has always taken care to cast genuinely good actors in roles that might otherwise come off as silly and slight. 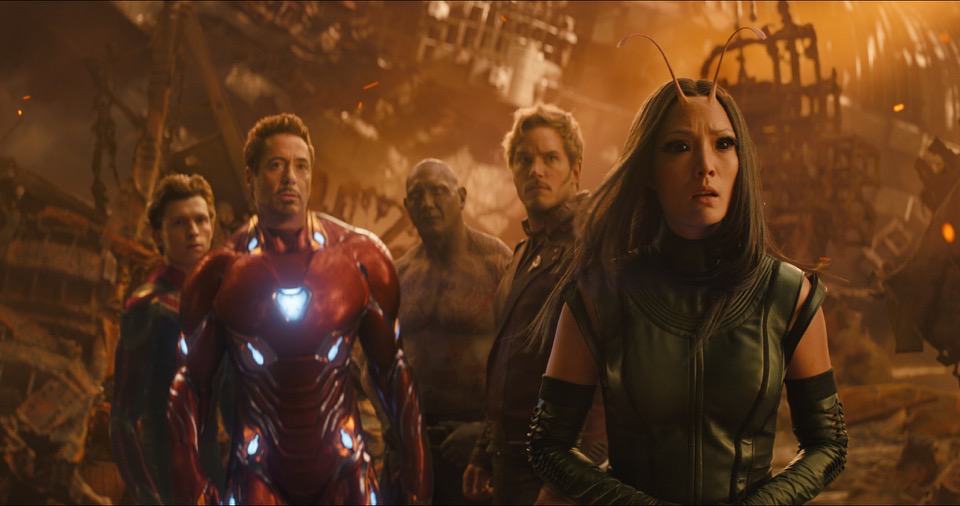 Even so, there are a few standouts amongst this enormous and enormously talented cast. Emotionally speaking, this is Downey’s film. He plays every note of Tony’s reluctant courage and bone-deep trauma, as he embarks on what he’s convinced is a suicide mission. He’s ably matched by Cumberbatch, who finds vulnerability even in his character’s most cunning and calculative move. Hemsworth, meanwhile, is given free rein to import the big-hearted comedic swagger of Thor: Ragnarok into this film – while also layering it with a deeply-felt, jagged grief for the losses he has suffered at the hands of Thanos and the universe.

In a film with so many moving parts, some elements don’t work quite as well. A couple of characters that you might have expected to be right at the forefront – including an original Avenger or two – fade into the background. The film tumbles from dizzying fight scene to dizzying fight scene, and while most of them are fantastically choreographed, there are some purely dumb moments that literally revolve around attempts to prevent Thanos from clenching his fist. In effect, this is a superhero mêlée that’s part over-the-top and part overkill, and might prove too much for those who don’t already care for this franchise and the characters in it.

Minor quibbles aside, though, Infinity War is yet another step in the right direction for Marvel. It continues the studio’s tradition of placing a premium on rich, complex storytelling that respects both its characters and its audiences. But it also refuses to make things easy for itself. The film ends even more bravely than it began, with a final ten minutes that will haunt and horrify you in equal measure. It’s a stroke of bold, brilliant genius – a narrative risk so audacious that you’ll want to follow Marvel wherever it goes next.

Summary: This movie will blow your mind and break your heart – and make you desperate to go back for more. Brave, brilliant and better than it has any right to be.