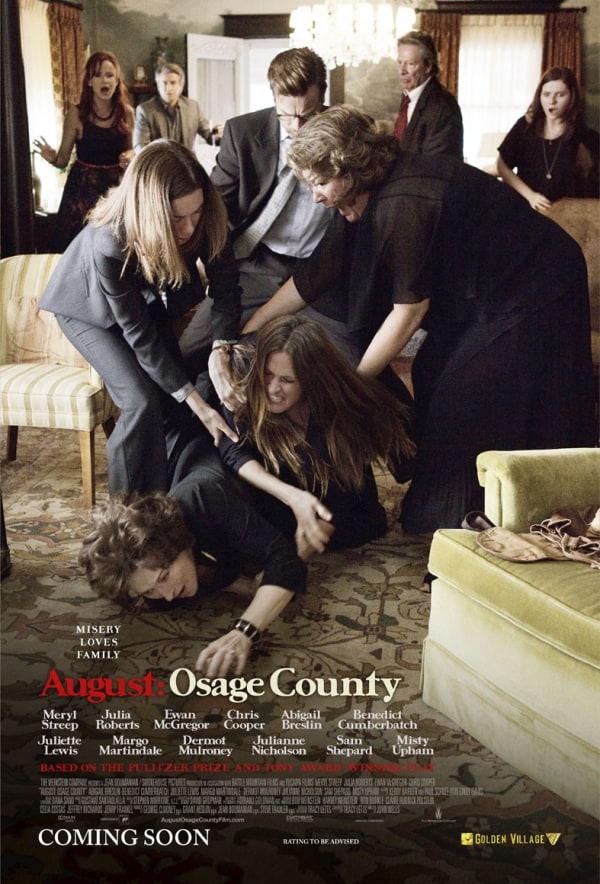 Surely a Hollywood film jam-packed with bankable stars and hoping to make rather than lose money would water down the play`s darkest twists and deepest secrets a suspicion apparently confirmed by the curiously upbeat trailer. Happily, August: Osage County retains the same desperately dysfunctional bite and spark it did on Broadway, even if it loses a good amount of shocks and subtlety in shaving an hour and a half off its running time.

The disappearance of patriarch Beverly Weston (Sam Shepard) serves as the emergency that unites his family in Osage County in the blazingly hot month of August. Grief and uncertainty have seemingly little impact on Violet (Meryl Streep), his bitter, cancer-stricken wife with an unholy dependence on drugs and cigarettes. In what one soon gathers is characteristic form, Violet doles out bile and loathing to her three daughters: strong-willed Barbara (Julia Roberts), whose marriage to writer Bill (Ewan McGregor) is slowly disintegrating; dutiful Ivy (Julianne Nicholson), who finally decides to plan for a better future with her cousin Little Charles (Benedict Cumberbatch); and flighty Karen (Juliette Lewis), who turns up with her new sleazy businessman-fiancÃ