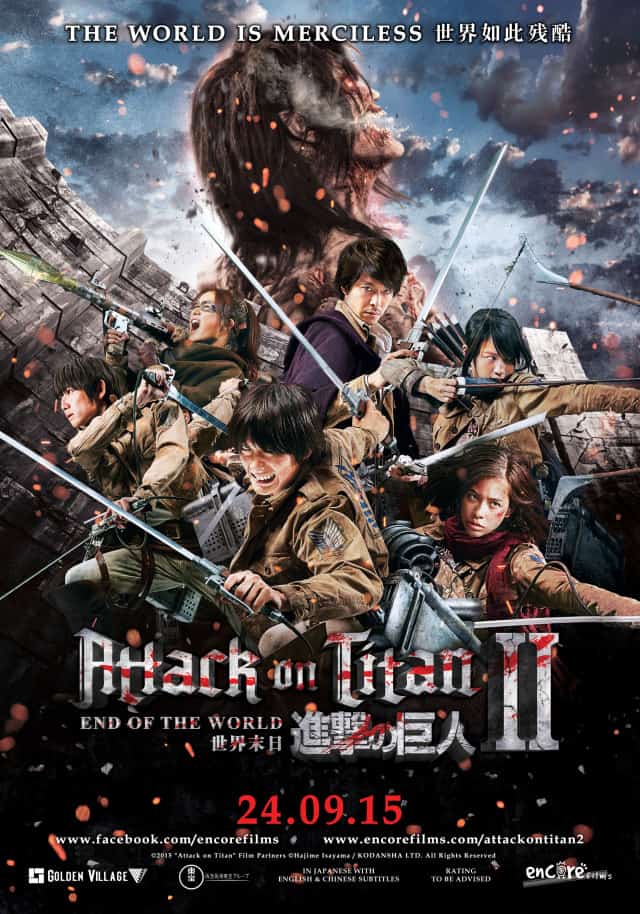 For those of you who hated the revisions Attack on Titan Part 1 made to the plot of the original manga, well… you’re not going to like Part 2 any better. For everyone else who watched Part 1 and sort of enjoyed the experience, Part 2 features all the requisite thrills and spills, but somehow manages to lose even more of its source material’s pathos. Beneath the big action set pieces and special effects wizardry, there doesn’t seem to be very much of a heart or emotional core left.

Part 1 ended with Eren Yeager (Haruma Miura) on uncertain ground with the rest of his squad, including best friend Armin (Kanata Hongo), rival Jean (Takahiro Miura) and erstwhile childhood sweetheart Mikasa (Kiko Mizuhara). The cause of the tension, of course, is Eren’s unexpected transformation into a thinking Titan after seemingly getting digested by a particularly ugly non-thinking Titan. As Eren and company attempt to move forward in their quest to make their home safe from Titans once more, however, they are stymied by formidable obstructing forces in the form of the mysterious Captain Shikishima (Hiroki Hasegawa) and the autocratic General Kubal (Jun Kunimura). Not to mention tons of ugly Titans. 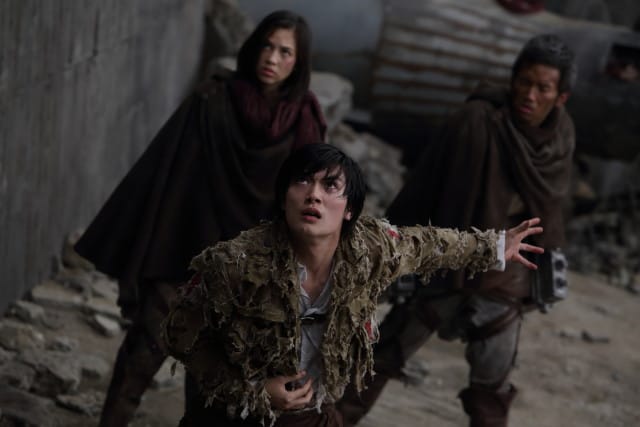 Part of the first movie’s appeal was arguably the skin-crawlingly revolting appearance of the Titans and their gruesome feeding habits, but they don’t actually get that many opportunities to strut their stuff this time around. Instead, the focus is planted squarely on Eren, his friends and their more-than-human adversaries. This means that the bleak horror aesthetic that the Titans lent the first film, and which gave the film such a strong visual impact, is very much diminished. And with Eren himself able to transform into a Titan, the Titans just don’t seem that scary anymore. New threats with more superlative powers surface, but Eren’s newfound abilities make the ensuing battles seem more like Godzilla versus King Ghidorah than Godzilla versus the human race. This isn’t necessarily a bad thing in itself, but it does detract from the human drama somewhat.

Speaking of which, the relationships between various characters also seem more piecemeal this time. This might be due to the fact that the action moves forward at such a breakneck pace that the deaths of several supporting characters, and how these deaths affect the main protagonists, become glossed over in the process. The romantic tension between Eren and Mikasa is given similar treatment, such that one is surprised by how quickly Mikasa sorts out her inner conflicts and renews her affections for Eren. Some films suffer from a lack of plot, but Attack on Titan Part 2 literally has too much of it, with big revelations surfacing every other scene. In strictly narrative terms, these plot twists work and are sufficiently mind-blowing, but clustering too many of them together within the confines of an 87-minute-long movie can only result in an extremely touch-and-go approach which denies each plot twist its proper moment in the sun.

The greater pity is that many of these plot twists constitute the most significant changes to the original manga that the filmmakers have made, and that with more time to appreciate the nuances, some fans of the source material may even have been grudgingly won over. As it is, the frenetic pace of the movie just emphasises the transgressional nature of the changes made, and is likely to rile fans even further.

Those who are clueless about the original manga will nevertheless find Attack on Titan Part 2 a step down from its predecessor. The action is taut and the actors are no less invested in their performances, but any emotional impact generated is just as quickly dissipated by the velocity of the film’s plot. Stick around for a post-credits scene which hints at more to come, but the chances are you’ll already be feeling pretty ambivalent about the franchise’s future by that point.

Summary: Destined to be venomously dissected by hardcore fans, and indifferently regarded by everyone else.