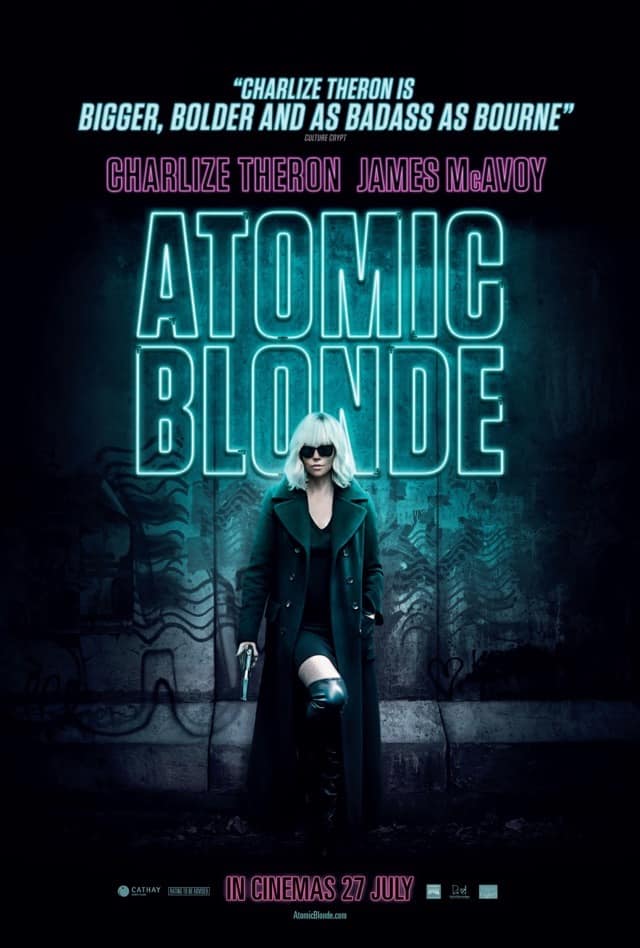 Charlize Theron goes from traversing the arid, scorching desert of Mad Max: Fury Road to sauntering into the coldest city in this action thriller. It is 1989, days before the fall of the Berlin Wall, and MI6 agent James Gascoine (Sam Hargrave) is killed by a KGB operative in West Berlin. Gascoine’s colleague and former lover Lorraine Broughton (Theron), one of MI6’s deadliest operatives, is sent behind the Iron Curtain to recover sensitive information stolen from Gascoine. Lorraine must work alongside MI6’s Berlin station chief David Percival (McAvoy), who is often drunk and unreliable. Lorraine’s mission is to track down a mark known only as ‘Spyglass’ (Marsan). She gets entangled with French spy Delphine Lasalle (Boutella), and Lorraine’s actions frustrate her superiors Eric Gray (Jones) of MI6 and Emmet Kurzfeld (Goodman) of CIA. Caught in a geopolitical firestorm and pitted against the most treacherous of enemies, Lorraine must retrieve the documents at all costs.

Atomic Blonde is based on the graphic novel The Coldest City, written by Antony Johnston and illustrated by Sam Hart. Directing the film is David Leitch, who co-directed John Wick with Chad Stahelski and who is also helming the upcoming Deadpool 2. Leitch employs a great deal of stylisation, crafting a brutal, sexy ‘neon-noir’. However, unlike John Wick, Atomic Blonde doesn’t lean into its heightened absurdity as much, and takes itself a little too seriously.

As with any espionage thriller, the plot is a web of double-crosses, shifting alliances and twisty reveals. Atomic Blonde hints at the fraught geopolitical climate of the time, but is far from substantive. While Atomic Blonde succeeds as a mood piece, it is too coolly detached for audiences to get involved in the story. With its title cards rendered as spray-painted graffiti text and its action set to songs by Queen, David Bowie, Depeche Mode and Kanye West, Atomic Blonde is sometimes too enamoured with its coolness for its own good.

Coming from a stunt performer/coordinator background and having co-founded the stunt collective 87Eleven Action Design, Leitch knows a thing or two about action sequences. Atomic Blonde showcases several elaborate, wince-inducing combat sequences, and doesn’t skimp on the blood splatter when people get shot in the head. It is inevitable that this gets compared to John Wick – we’ve already done that earlier in this review. As masterfully as the stunts are executed, the balletic gunfights in John Wick were more dazzling, and that film’s juxtaposition of elegance and brutality more beguiling, than the action on show in Atomic Blonde.

Theron is an outspoken feminist, and Atomic Blonde has been characterised as a feminist action movie. The screenplay is written by Kurt Johnstad, who has penned such “manly men” flicks as 300 and Act of Valour, and the film’s female characters are very much sexualised. However, Theron owns the character’s sexuality, and while it can be argued that moments like a lesbian sex scene are exploitative, she displays such conviction that it doesn’t feel sleazy. This is a role that’s right in Theron’s wheelhouse – Lorraine is slinky, lethal and unafraid to get her hands very dirty. We get very little in the way of back-story or meaningful character motivations, but Lorraine is intended to be an enigma and Theron relishes the cloak and dagger machinations her character enacts.

As is expected of McAvoy when he gets to play characters a little on the wild side, he puts in an entertaining turn. David plays second fiddle to Lorraine, and McAvoy has no qualms letting Theron take the spotlight. The openly hostile dynamic between the two ostensible allies contains glimmers of fun, but McAvoy and Theron don’t get to play off each other as much as this reviewer hoped.

Boutella’s Delphine is very much the traditional Bond girl: she’s in her over depth, and is seduced and taken advantage of by the hero(ine). It can be argued that the much buzzed-about lesbian sex scene between Lorraine and Delphine is gratuitous, but Theron has argued that it’s an example of women owning their sexuality in a mainstream film, something we don’t see a lot of. In the meantime, Goodman and Jones show up mostly to facilitate the framing device of Lorraine being debriefed/interrogated in the aftermath of her Berlin mission. Unlike Theron and Boutella, they do not have a sex scene together.

As a platform for Charlize Theron to strut her action heroine stuff, Atomic Blonde works well. However, its convoluted spy vs. spy narrative is at odds with its stylishness and devil-may-care vibe. Atomic Blonde gets bogged down with considerable amounts of plot to get through in between the action while not possessing much depth, but Theron’s virtuosic badassery make it worthwhile.

Summary: While not as compulsively entertaining as it could’ve been, Atomic Blonde packs in plenty of style and showcases Charlize Theron in full action heroine mode.