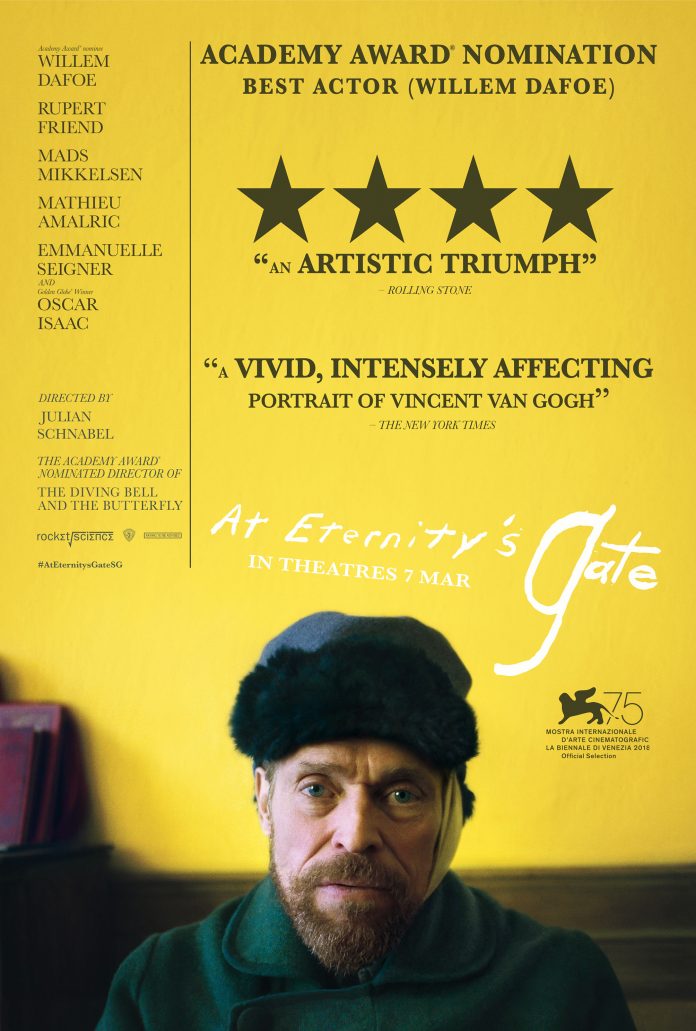 The Low-Down: At Eternity’s Gate follows Vincent van Gogh in his final years in Paris and Southern France where he painted some of his best works that that are still wowing artists and art appreciators today. It’s mostly shot with a handheld camera, but somehow features some of the best uses of lens flares. Be warned, though, it’s not a crowd pleaser by any means.

The Story: The biopic paints mostly the struggles with which van Gogh (Willem Dafoe) grappled as he tries to be part of the artist community in France while slipping in and out of insanity, drunkenness, and depression. His relationships with his brother, Theo (Rupert Friend) and close friend, Paul Gauguin (Oscar Isaac), sour as he sinks deeper into his obsession with painting and supposed mental illness, eventually leading to him being alone with nothing but his paintings and breathtaking landscapes.

The Good: The solo piano with strings score is mostly what bolsters the painting sequences for average moviegoers who find it hard to appreciate the process. The completed paintings, though, are quite captivating — even the regular can discern the brilliant portrayal of natural landscapes. From van Gogh’s delirious states and artistic frustrations to his dramatic expressions and emotional outbursts, the Academy Awards Best Actor Nominee never fails to wow. Also, the movie’s handheld cinematography is used with rather a decent flair by director Julian Schnabel and crew — some angles can be a little disorienting but most are on point in portraying van Gogh’s perspective.

The Not-So-Good: Much of the dialogues in the first two acts are clunky and say very little about the characters. What’s worse, the lines are often incomprehensible without subtitles. The storytelling is hard to follow at times too, particularly because of the lack of dialogue and time jumps without much explanation. Above all, most viewers’ beef would most probably be the pacing of certain sequences caused by the unclear timelines.

Breathtaking Sequences: Panoramic shots of scenic landscapes that seem to go on for eternity — the perceived reason for van Gogh’s obsession with painting in nature — are the highlights of the movie, aside from the painter’s famous and familiar works.

Watch Out For: The conversation at the asylum between van Gogh and a priest (Mads Mikkelsen). The dialogue here pretty much sums up the misunderstood genius’s life which is delivered masterfully by Dafoe and Mikkelsen.

Recommended? If you’re interested to know about van Gogh and his inner thoughts, yes. For the average movie-goer though, At Eternity’s Gate won’t be a popular choice unless you have some knowledge about appreciating art and the art world of the late 1800s.