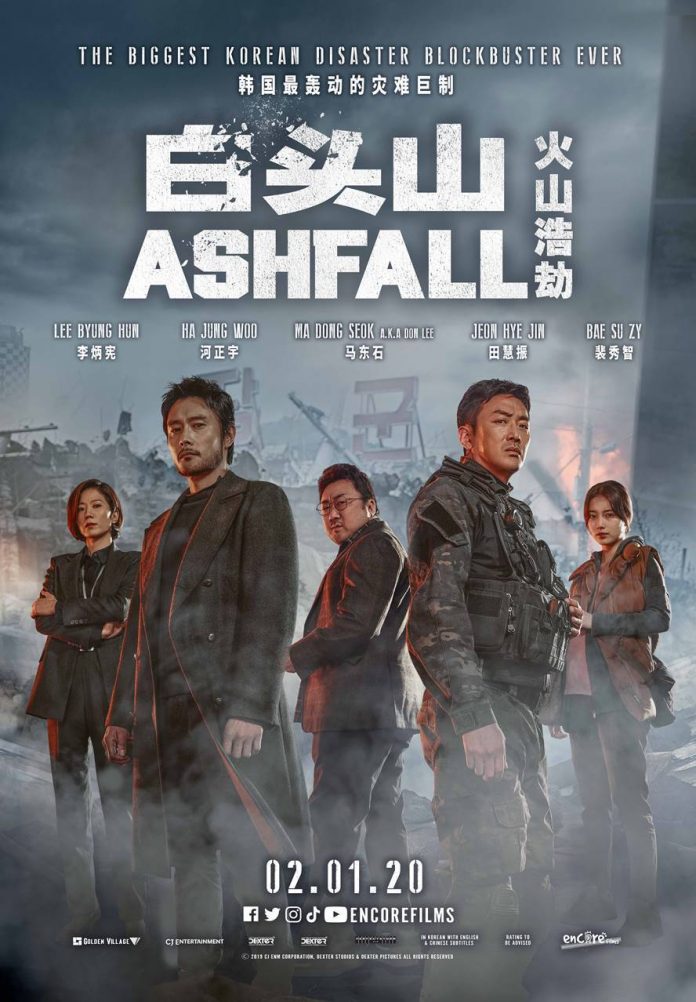 The Low-Down: Armed with a US$17 million budget and a co-director, comedy cult film Castaway On The Moon (김씨표류기) director Lee Hae Joon attempts on the disaster genre with a Korean A-List cast. What if the largest volcano in the Korean Peninsula erupts not once, but multiple times in a span of a week? That’s the premise for Ashfall (백두산). Having topped the Korean box office in its opening weekend, it’s definitely a movie that will be on K-movie/drama fans’ radars.

The Story: Special Forces EOD Captain Jo In-chang (Ha Jeong-woo, Along With The Gods (신과함께) franchise, The Handmaiden (아가씨)) is about to be discharged from the Korean army and is looking forward to fatherhood as his wife Ji-yeong (Bae Suzy from K-Pop Group Miss A) is in her pregnancy’s third trimester. Unfortunately, Mt Baekdu suddenly erupts and he’s chosen by Korean-American meteorologist Prof. Robert Kang (Don Lee, Train To Busan (부산행), The Champion (챔피언)) to join a (suicide) mission to prevent a final and fatal eruption that will wipe out almost half of Korea. To increase their chances, the team has to rescue North Korean spy Ri Joon-pyeong (Lee Byeong-heon, G.I. Joe franchise, The Magnificent Seven) in a prison.

The Good: Ashfall is a testament of Korean cinema’s ability to deliver when given a decent budget to work with — fairly impressive CGI work, non-cringy dialogue, and a cast that knows what to do (well, mostly). Most of all, a decent narrative that brings out the realistic sides of disaster — the basic drives and survival instincts of humans. Character writing and development are commendable, and minute details presented earlier in the film are addressed and used to good effect. The occasional comedic touches that fit well into the situations are the cherry at the top, making the movie an overall satisfying and worthy watch.

The Not-So-Good: Ashfall falls in selected performances, particularly rookie movie star Suzy. She tries her best but her greenness sticks out painfully among the veteran cast members, making Captain Jo’s wife seems flat and just a small role to move the story forward. Presidential Aide Jeon (Jeon Hye-jin, The Throne (사도)) is given little to work with, which makes this reviewer wonder if A-List actresses would ever get the chance to outshine their male colleagues in big-budget films (not so much a movie flaw, but Ashfall could have been better if Jeon is allowed more room).

Character Arcs: Unlike most disaster movies where the main protagonist is both an average Joe and infinitely selfless, Ashfall puts its main protagonist in a position where his (Captain Jo) actions are believable and justified. Coupled with Lee’s North Korean double agent Joon-pyeong, the chemistry between these two characters and how their individual situations shape their decisions complete the two characters’ arcs gratifyingly.

Drama-Centric: As with any Korean movie, the drama is what makes Ashfall a unique piece of work versus the typical Hollywood disaster movies. Granted, some viewers might find certain parts overly dramatic and excessive, but don’t judge it purely based on that. Anyway, the drama serves a bigger purpose — putting the characters in situations where their decisions are not questionable and ridiculous.

Recommended? Yes, because it’s an achievement by Korean cinema in the disaster film genre and Ha and Lee’s chemistry is really something to watch. The visual effects are not the best-in-class but brilliant enough to not pull you out of the story. Most of all, the decision to leave (geo)politics out (mostly) makes the movie all the more palatable to swallow.