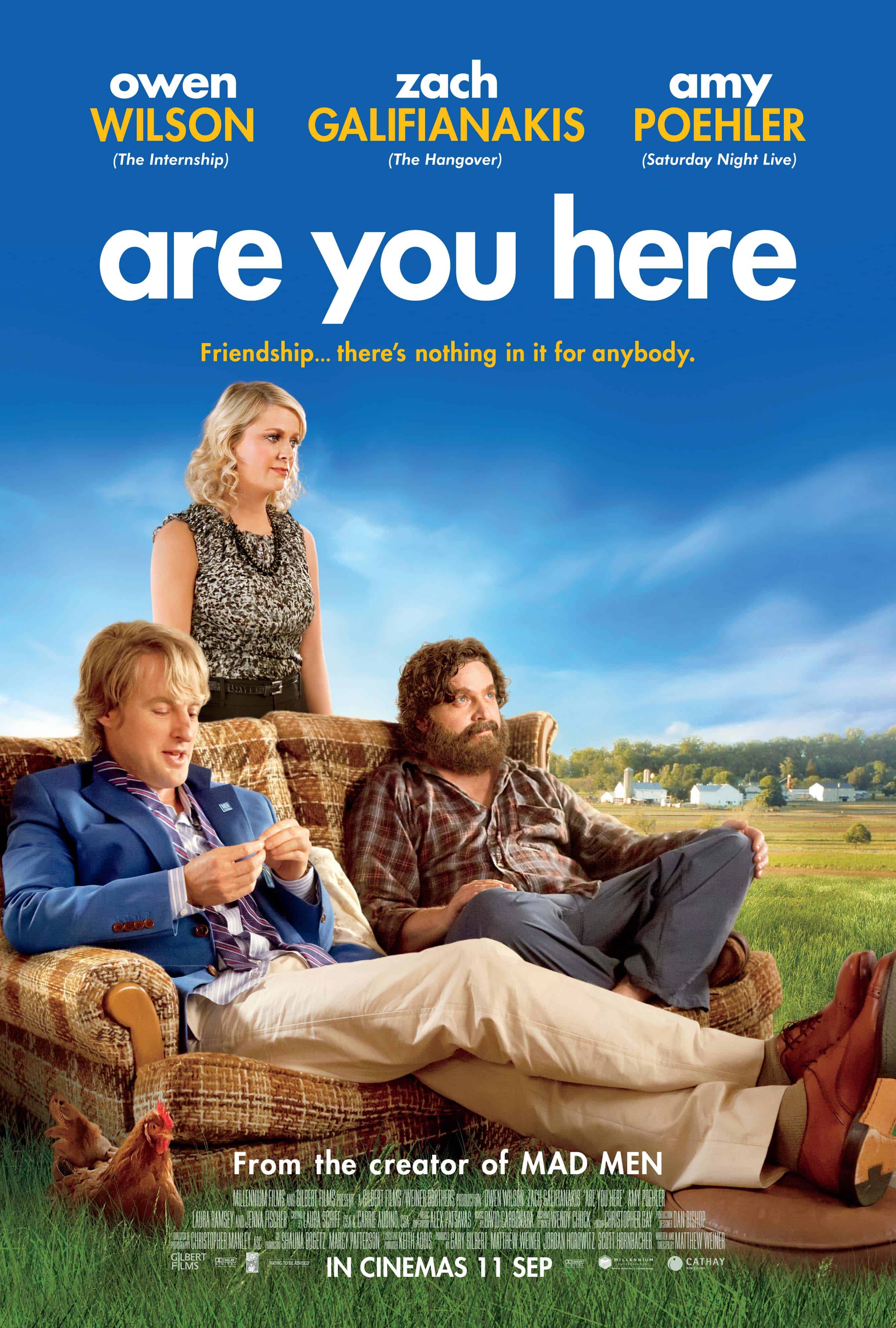 On paper, Are You Here is incredibly promising. Written and directed by Matthew Weiner, who created one of the most scintillating television series in recent memory in Mad Men, it stars top-notch comedians Zach Galifianakis and Amy Poehler – and yes, even Owen Wilson can be brilliant on occasion – and appears to require them to dig a little deeper in dramatic and emotional terms. So far, so excellent, right? The actual film, however, is a confounding mess: the characters are painfully inconsistent, their relationships annoying rather than engaging, and it’s pretty much impossible to tell what the point of the entire film is. 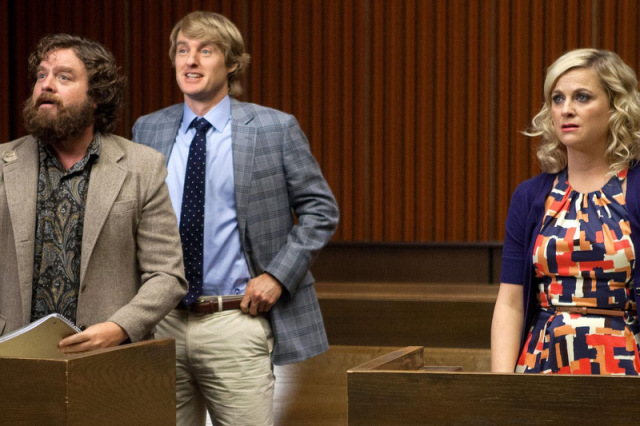 We open on the dysfunctional relationship between Steve Dallas (Wilson) and Ben Baker (Galifianakis). Steve is a telegenic but shallow TV weatherman, who leers after but refuses to commit to or care about the women he beds. He seems only to have a soft spot in his coal-black heart for his loopy, manic-depressive childhood friend Ben. When Ben’s father passes away, Steve accompanies his buddy to the funeral – an odd affair which re-introduces them to Terri (Poehler), Ben’s uptight steamroller of a sister; and Angela (Ramsey), the ethereal, beautiful, young stepmother still living in the family home. After the will is read, Terri vows to regain control of the family store from Ben, and Steve finds himself increasingly distracted from his empty existence by the promise of a deeper, happier life with various members of the Baker family.

The premise of Weiner’s film has so much potential: it can explore the debilitating and very real effects of mental illness, and the dark, bitter family ties that bind. Once in a while, Are You Here does crackle slowly to life, often when Terri barges her way into a scene. She’s about the only consistent character in the film: pushy, determined and apparently uncaring, yet grappling with her own heartaches (she’s trying desperately and failing to have a baby with her husband). 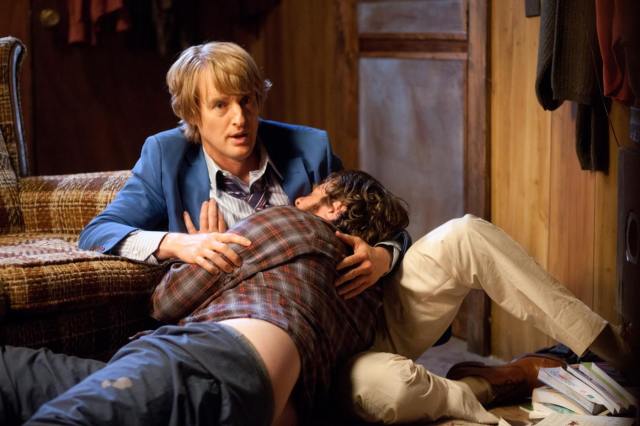 But everything else is an almost remarkable mess. The likes of Steve Dallas – flighty playboys with surprising inner depth who are recalled to their senses by a life-changing event – have existed in many other films, but this incarnation never feels sympathetic. Weiner repeatedly tells us that Steve is charming, without actually showing us any proof in that regard. Instead, the character is whiny and opaque, his spiritual awakening too much confused with his lust for Angela. The same problem applies to Angela. She’s resolutely portrayed as a genuinely grieving widow, who really did love Ben’s father and was never in it for the money. But, often within the same scene, she transforms uncomfortably into a sexy romantic prospect – and not just for Steve, which is even more perplexing within the context of the entire film.

Even more frustrating is Weiner’s troubling treatment of Ben’s mental illness. Ben bounces from moment to moment, a ball of manic energy. Terri tries to have her brother declared legally and mentally incompetent to handle their father’s estate. It’s all bitter, crushing stuff, tied up with an odd perspective on the efficacy of Ben’s psych meds. In effect, this is a story worthy of deep, thoughtful exploration – how much of Ben’s personality can be attributed to his illness? – but is instead played for cheap laughs, not that there are many to be had. 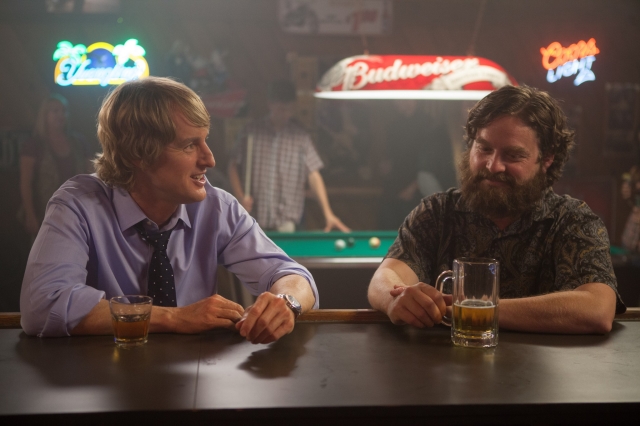 The cast works hard, but can’t quite power through the loopholes and problems in the script. This should be an opportunity for Wilson and Galifianakis to play their stock characters with a darker, smarter twist, but the duo wind up trapped in roles that barely make any sense. Since it’s never clear just what role Angela plays within the film (reminder of the past? angel of change and love?), Ramsey is stuck in the same boat. Poehler is the only member of the cast who gets to do something a little different, playing a tough-as-nails character miles away from her sunshine-bright persona on Parks And Recreation. Even so, she disappears from the proceedings for such long stretches that it’s sometimes hard to remember she’s in the film at all.

Oddly enough, Are You Here might have worked far better as a television series. The ideas, characters and plot twists Weiner cooks up are so complicated and contradictory that they might very well fare better if explored at length and over time. Packed into a running time of just under two hours, the narrative feels rushed and ridiculous, its dramatic potential disintegrating as the film storms along in its strange, determined fashion. In the end, Are You Here is neither funny nor insightful, instead squandering the efforts of its cast, writer and audience to engage with this story and these characters.

Summary: Nope. This is, most definitely, not here.