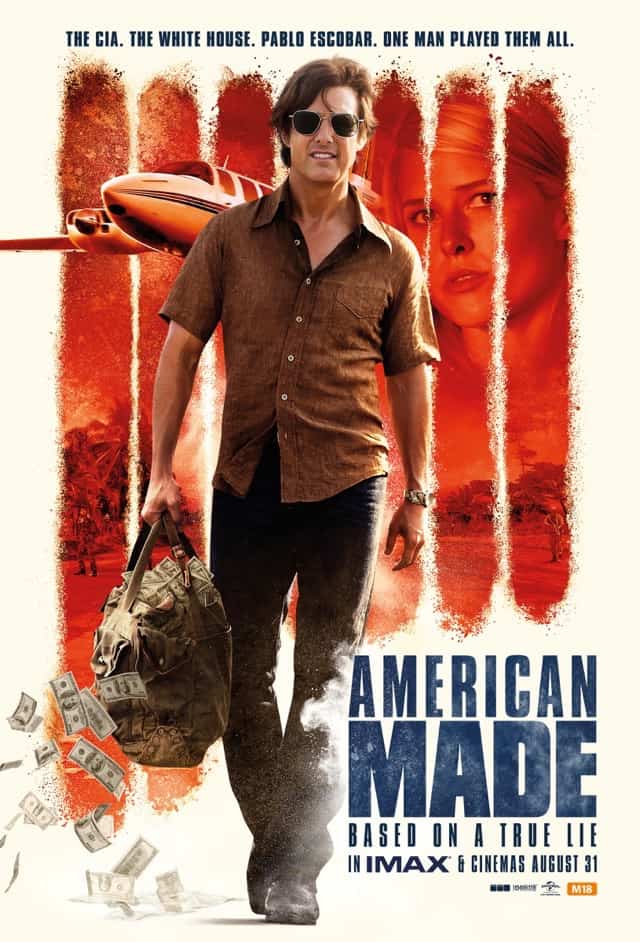 As the star of the Mission: Impossible franchise, Tom Cruise has performed many daring stunts. In American Made, he plays someone who, by his own admission, leaps before he looks. It is 1978, and TWA pilot Barry Seal (Cruise) is recruited by CIA operative Schaefer (Gleeson) to take surveillance photos of communist rebels in South America. Soon, Seal is tasked with supplying the Nicaraguan Contras with American-supplied arms. Seal is also hired by the Medellín Cartel, transporting shipments of cocaine from Colombia and Panama to the United States. Seal’s wife Lucy (Wright Olsen) and their young children relocate from Baton Rouge, Louisiana to Mena, Arkansas. Mena Intermountain Municipal Airport becomes the base of operations for Seal’s burgeoning concern, as Seal rakes in the cash and evades the long arm of the law by becoming a DEA informant and operative. As a player in a game with dizzyingly high stakes, it will take all of Seal’s wits to keep him from crashing and burning.

American Made reteams Cruise with his Edge of Tomorrow director Doug Liman, who crafts a free-wheeling retro comedy thriller which is as engaging as it is entertaining. This is based on a true story, and you might know the name ‘Barry Seal’ from films and TV shows like Doublecrossed, The Infiltrator and Narcos. American Made certainly feels like the ‘Hollywood version’ of Seal’s story: despite the twists and turns, the narrative is so straightforward as to feel simplified and streamlined to keep things moving along. This is to say nothing of the fact that Cruise doesn’t resemble the real-life Barry Seal, who was pudgy and balding, in the slightest.

However, the way the film is assembled and the way screenwriter Gary Spinelli structures the plot, it’s easy to get swept up in the proceedings. Much of the comedy is derived from the inherent absurdity of the situations that Seal gets caught up in, and the film open acknowledges how crazy everything is without coming off as too flippant. It’s comparable in tone to 1990’s Air America, which starred Robert Downey Jr. and Mel Gibson as unwitting drug smuggling pilots during the Vietnam War.

Liman has considerable fun with the film’s style: the opening Universal Studios logo is interrupted by the old-school logo from the 70s, and the other production companies get retro-fied logos too. Uruguayan cinematographer César Charlone of City of God fame provides a mix of slick sweeping aerial shots and 70s-style handheld closeups, with the heat of the South American jungles radiating off the screen. The plane pursuit sequences are realistic and hair-raising, but came at a cost. Tragically, stunt pilot Alan D. Purwin and his Venezuelan co-pilot, Carlos Berl, died in a crash caused by foggy weather near Medellin, Colombia.

Barry Seal was a cog in a much larger machine, but this film places him front and centre and the film is Cruise’s to carry the whole way. The embarrassing dud that was this year’s reboot of The Mummy made some feel that Cruise’s star power was starting to wane, but American Made sees him back in top form. As the morally ambiguous charming rogue who’s in over his head but loving it, the Seal character is right in Cruise’s wheelhouse.

Cruise eclipses everyone else in the movie, such that the supporting players barely make an impact. Gleeson affects a convincing American accent as CIA operative Schaefer, who registers as a cipher and a composite character of some kind. Wright Olsen is, as expected from films of this type, relegated to the role of ‘the wife’, fretting over her husband’s questionable activities but eager to enjoy the lifestyle that said activities fund. Caleb Landry Jones visibly enjoys playing Lucy’s troublemaking, ne’er-do-well brother, whose sloppiness puts Seal in danger of being found out. It all revolves around Cruise and the other characters seem incidental, reinforcing the ideal of Seal as a mythic antihero around whom other forces revolve. It’s fine because Cruise’s performance more than anchors the film, but it does remind us that we’re watching a movie, detracting some authenticity from the real story.

American Made is a movie that’s powered by Cruise’s megawatt grin. Because it’s pitched as a comedy, the murky morality never becomes something audiences will think too deeply about. We’re invited to join the antihero on the ride of his life, and Liman spins an engrossing, invigorating yarn. With Cruise in the cockpit, this ride is an eminently enjoyable one.

Summary: A high-spirited biopic that packs in the laughs and thrills, American Made doesn’t delve deeply enough into the political intrigue to be very substantive, but it’s an entertaining, well-made Tom Cruise vehicle all the same.