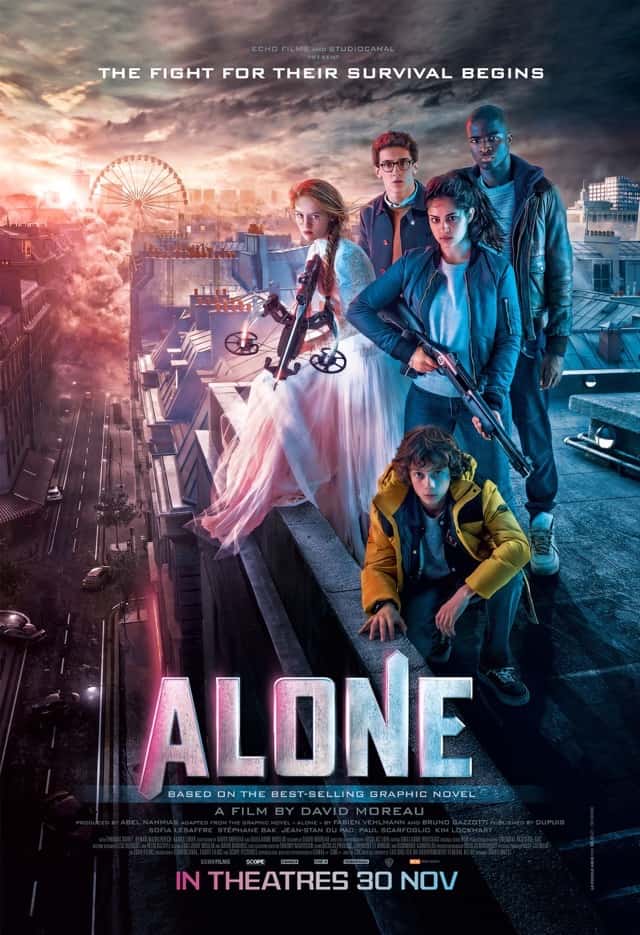 Based on the popular French graphic novel of the same title, Alone follows a group of teenagers in Fortville, a fictitious town located somewhere in France. The story is bizarre yet believable and even captivating as our young heroes struggle to survive an impending apocalypse.

David Moreau, who successfully led films such as Them (2006) and It Boy (2013), directed and wrote the screenplay for Alone. While the film runs a lean 98 minutes, Moreau fleshes out the premise of the story nicely and paces the plot development masterfully.

Alone touches on several dark undertones and discusses difficult family topics such as domestic violence, divorce and parental negligence. While struggling to survive in a world where everyone suddenly disappears, each character has to face his or her biggest fear: being alone – psychologically and physically.

Moreau and his crew are great at building and maintaining the suspense throughout the film, especially with the tight close-ups coupled with flawless camera work. Despite the tight budget, the visual effects are also breathtaking and could even pass off as those of a high-budget studio film.

The young actors and actresses display mildly impressive performances, except Sofia Lesaffre with her on-point portrayal of boyish Leila. Paul Scarfoglio plays Yvan, a spoiled and cowardly billionaire’s son, whose whining serves no purpose other than to fill in awkward silences. Overall, most of the characters don’t get any arcs, a disappointing miss for such an intriguing plot.

Even the eldest Stéphane Bak doesn’t convince with several crucial scenes where a tad more emotion would’ve made a world of difference to his character, Dodji. Jean-Stan Du Pac, who plays talkative and playful Terry, sets the mood well at the start only to under-deliver in the latter half.

The biggest problem with the film, though, is how Moreau thinks he can get away with an it’s-just-a-dream-ish ending. The film’s logic is solid for the first 85 minutes or so, only to crumble at the end. Mind-bending endings that make some sense and ties up subtle plot points are amazing, but Alone concludes sloppily, squandering the earlier efforts to build a strong case for the film’s universe.

If the film ended right after the goosebumps-inducing revelation, Alone might have been a masterpiece and even turn into a cult film where fan theories will start surfacing on subreddits. Sadly, Moreau is too ambitious and the film leaves moviegoers leaving the theatre with nothing more than disappointment and confusion.

Summary: A thriller sprinkled with psychological horror elements to keep you on edge, Alone starts off as a fascinating film about teenagers in an apocalyptic world but falls apart because of a far-fetched finale.