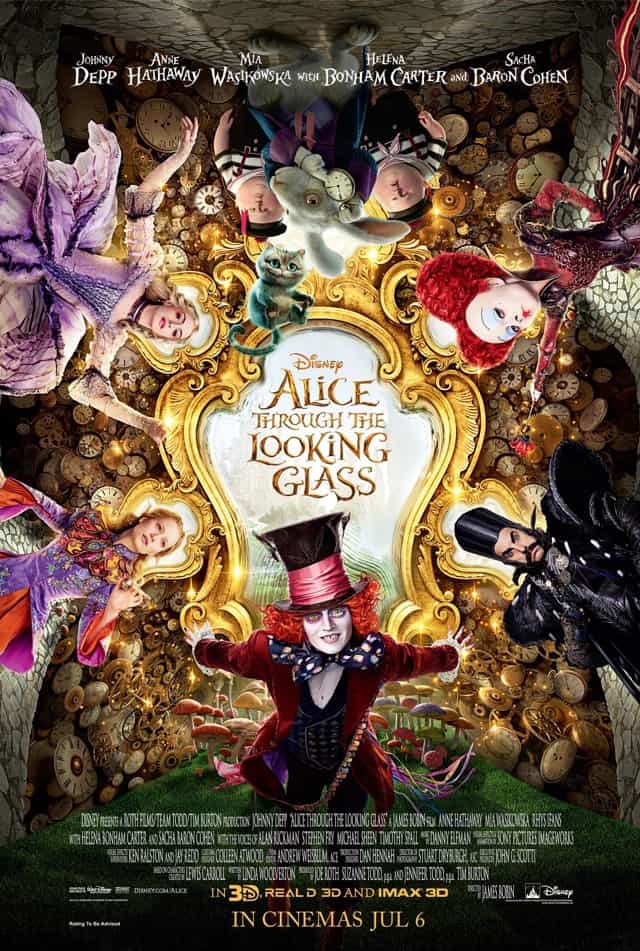 Underland beckons Alice Kingsleigh (Wasikowska) once more in this sequel to the 2010 fantasy adventure. After spending the last three years on the high seas as the captain of her father’s ship the Wonderland, Alice returns to the magical realm she has visited twice before. Absolem (Rickman) the butterfly leads her through the Looking Glass, whereupon Alice is reunited with her friends Mirana the White Queen (Hathaway), the Cheshire cat (Fry), Nivens McTwisp the White Rabbit (Sheen), Bayard the Bloodhound (Spall), Mallykun the Dormouse (Windsor) and Thackery Earwicket the March Hare (Whitehouse). They inform her that Tarrant Hightopp the Mad Hatter (Depp) is ill, and the White Queen convinces Alice to journey through time in search of the Hatter’s family, long presumed killed. Alice comes face to face with Time (Baron Cohen), who controls all time in Underland with a device known as the Chronosphere. To save the Hatter, Alice defies Time himself in an odyssey that will upend all of Underland.

2010’s Alice in Wonderland grossed over $1 billion worldwide, and that seems like just about the only reason Alice Through the Looking Glass was made. With the first film, director Tim Burton delivered an Underland that was stuffed with eye candy but a plot that bore little resemblance to the irrepressible anarchic surrealism that fuelled Lewis Carroll’s stories. Burton is replaced in the director’s chair by James Bobin, who inherits and competently carries forth the first film’s visual style, but who does not steer the material any closer to the spirit of the source.

Linda Woolverton, who also wrote this film’s predecessor, has bolted a time travel story onto the world and characters of Alice in Wonderland, and not a particularly inspired one at that. By having Alice meet younger versions of the Mad Hatter and the White and Red Queens amongst others, this functions as a prequel without strictly being one. This approach whittles away at whatever charm and mystique the characters possessed in the 2010 film, and the backstories are distinctly underwhelming. The Mad Hatter has daddy issues and the Red and White Queen have a bog-standard petty sibling rivalry, hardly the stuff of euphoric whimsy.

Granted, it is pretty to look at. Time’s domain, a cavernous Gothic cathedral is suitably foreboding and the action set pieces are intermittently entertaining. Costume designer Colleen Atwood’s creations are intricate and delightful, with Alice spending the bulk of the film in a kaleidoscopic dress inspired by Chinese imperial costumes. The way the Hatter’s makeup subtly morphs depending on his mood was a fun idea from the first film that works just as well here. The visual splendour just doesn’t quite make up for the film’s narrative shortcomings.

The bulk of the cast from the first film are back, but most of the characters seem to be here just for the sake of it. Yes, there’s some joy to be derived from seeing Alice reunited with her other-worldly pals, but the character interactions come off as largely perfunctory. Wasikowska’s Alice is meant to be plucky and spirited, but she’s difficult to buy as an action heroine – never mind that turning Alice into an action heroine still reeks of boardroom mandate. Many of the crises that arise in this film seem to be the direct result of Alice making silly mistakes, and there’s the sense that she should know better since this isn’t her first Underland rodeo.

Baron Cohen plays Time with an air of moustache-twirling villainy layered atop his usual goofiness – except the character really isn’t written as that bad a guy. The question of whether or not time can be considered an abstract concept has led to much chin-scratching amongst philosophers through the ages. Having the personification of time as a fantasy film antagonist is a fine idea, and the German accent Baron Cohen affects brings precision engineering to mind. Alas, it’s hard to shake the feeling that most of the character’s potential remains untapped.

The rest of the characters are much as we remember them. Johnny Depp’s just being Johnny Depp – not much more to say than that. The wild abandon with which Bonham Carter essayed the Red Queen’s petulance and sadism was a highlight of the 2010 film and here, the attempt to give the character a degree of sympathy seems like a massive miscalculation. The mellifluous voices of Fry, Spall and the late Rickman are a welcome aural treat to supplement all that eye candy. The Hatter’s family, in particular his father Zanik (Ifans), are meant to be the linchpins of the plot, but have minimal screen time and make little impact. Andrew Scott, Sherlock’s Moriarty, is also criminally wasted in a throwaway role as a sinister psychiatrist.

Unlike a large number of critics, this reviewer did not find Alice Through the Looking Glass to be an unmitigated disaster. Despite its wrongheaded approach and lacklustre plot, it still manages to be entertaining and attention-grabbing. While the design work might be too gaudy for some, it’s still lavish and immersive. Still, it’s disappointing that this film repeats its predecessor’s mistake of attempting to squeeze Lewis Carroll’s bizarre and iconic creations into a tent-pole blockbuster mould.

Summary: “Back to the Future did it better” isn’t quite what we should be saying after an Alice in Wonderland movie.