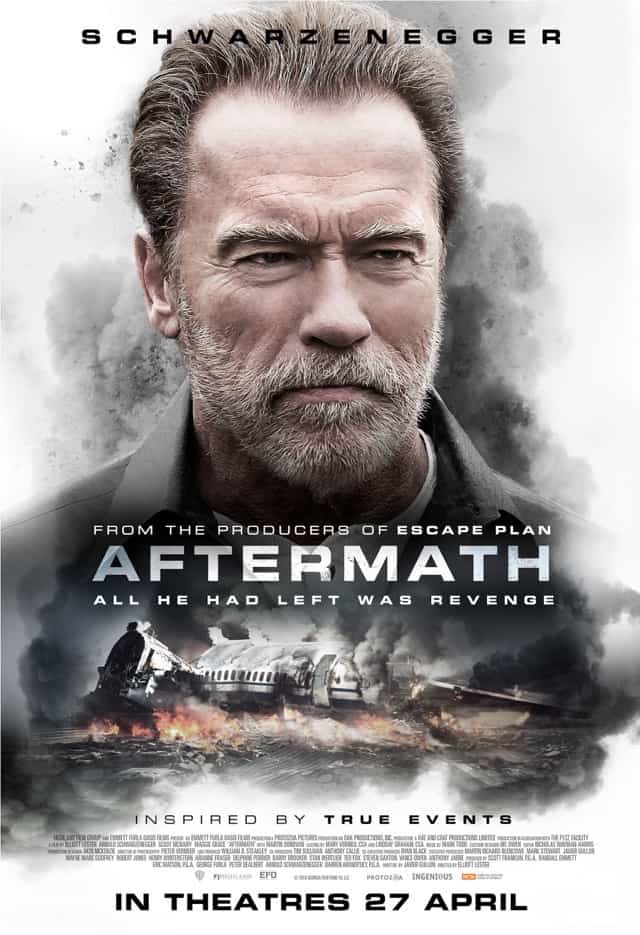 Arnold Schwarzenegger has been back in the limelight, after a short-lived stint on The Apprentice which earned the relentless mockery of the show’s former host, President Trump. In this film, Schwarzenegger leaves the realm of reality television for ‘serious actor’ territory.

The Austrian Oak plays Roman Melnyk, a construction foreman whose wife Olena (Tammy Tsai) and pregnant daughter Nadiya (Danielle Sherrick) are flying in from Ukraine to spend Christmas with him in the United States. Olena and Nadiya’s plane is caught in a tragic mid-air collision, which claims the lives of 271 souls aboard both aircraft. Broken and distraught, Roman blames Jake Bonanos (McNairy), the air traffic controller on duty. Jake is wracked with guilt following the incident, and spirals into a depression that affects his relationship with his wife Christina (Grace) and his young son Samuel (Nelson). Roman decides to take matters into his own hands, and sets about tracking down Jake to kill him.

Aftermath is inspired by the real-life incident of the Überlingen mid-air collision in 2002, when two planes flew into each other above a German town. Russian architect Vitaly Kaloyev, whose wife and two children perished in the crash, hunted down Peter Nielsen, the air traffic controller handling traffic at the time, even though an inquest cleared Nielsen of any responsibility.

Elements such as disaster, grief and revenge make this a potentially compelling tale. However, Aftermath’s heavy-handed approach draws too much attention to itself. Director Elliott Lester practically shouts “this is a serious, artistic drama, you guys!” from the rooftops. The title card consists of all-lowercase white letters on a black background, as Mark D. Todd’s contemplative piano-driven score plays in the background. Then, the title card ‘roman’ (similarly all-lowercase) appears, showing us the events from Roman’s point of view. Subsequently, we get a title card reading ‘jacob’, switching to Jacob’s perspective. These stylistic touches are intended to legitimise Aftermath, but instead give it the vibe of a student film. This is to say nothing of Javier Gullón’s often inelegant dialogue. Gullón is known for writing Denis Villeneuve’s mind-bending psychological thriller Enemy.

Schwarzenegger has been dipping his toes into more dramatic fare, playing a father who struggles with gradually losing his daughter to a zombie virus in Maggie. Perhaps it was easier to accept Schwarzenegger flexing his thespian muscles in Maggie, because it was ostensibly still a genre film. While Schwarzenegger takes the role of Roman seriously, his presence is distracting. Part of it is because he’s never without his trademark Austrian accent, and is playing a Ukrainian man in this film. There’s also a random superfluous moment in which we see Schwarzenegger’s bare posterior while he’s in the shower, which seems hardly necessary. The film is set during Christmastime, and “Jingle Bells” is played in one scene. Surely it must have occurred to Lester that this would only conjure up memories of the Schwarzenegger-starring family comedy Jingle All the Way.

Aftermath is interesting in that it has no villain, and we’re meant to sympathise equally with Roman and Jake. The circumstances under which the collision happened are clearly explained, with the primary causes being that the control tower was short-staffed and phones were malfunctioning. McNairy is a capable performer, but Jake’s meltdown isn’t any different from other downward spirals we’ve seen in movies or TV. The film also goes the on-the-nose route of establishing just how rosy things are between Jake and Christina, obviously signalling that things will fall apart.

We’ve refrained from stating it here, but if one does a cursory look-up of Kaloyev’s actions following the Überlingen mid-air collision, one will know how things ended. As such, the events depicted in Aftermath are predictable, and even at 92 minutes, well below the average running time for a drama, the film feels padded out. Instead of being a visceral meditation of the destructive power unchecked, unmanaged grief can have, Aftermath seems more concerned with packaging itself as respectable awards-worthy fare.

Summary: Try as he might, Arnold Schwarzenegger can’t shake off the baggage of being an action star and pop culture icon. The grave, deadly serious film that surrounds him is stodgy rather than impactful and moving.