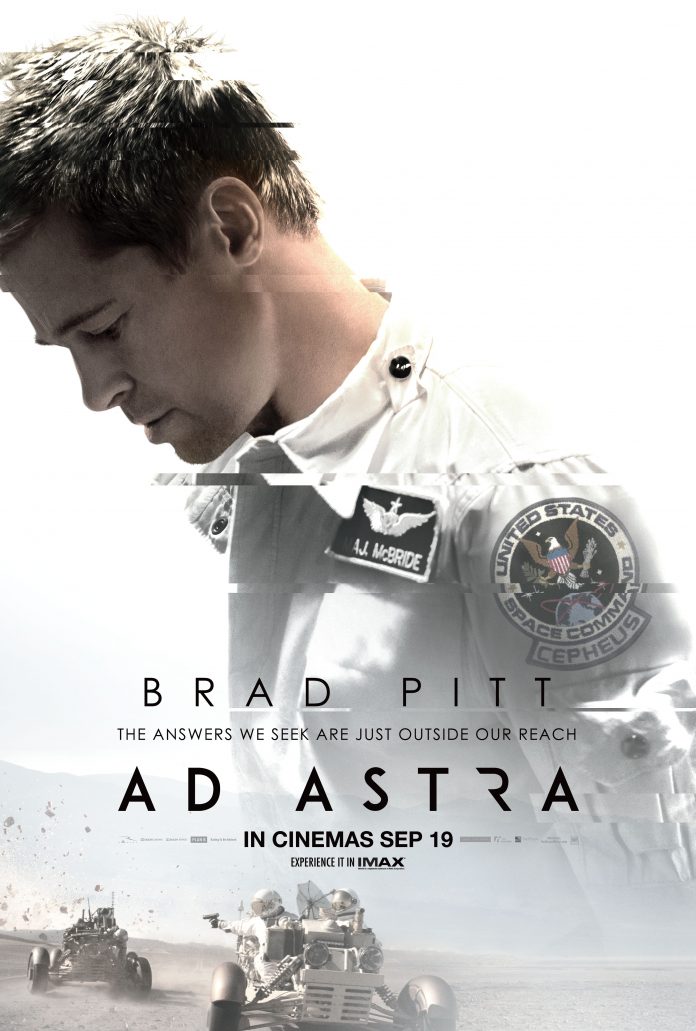 The Low-Down: Director James Gray, known mainly for his contemplative dramas, launches into big-budget adventure movie territory with Ad Astra, while still retaining a more sombre, introspective tone than the typical movie of this type. ‘Ad Astra’ is Latin for “to the stars”. Brad Pitt was originally attached to star in Gray’s previous film, the historical adventure drama The Lost City of Z, and while he was eventually replaced with Charlie Hunnam, Pitt stayed on as a producer. Pitt and Gray collaborate again on Ad Astra, which puts the established movie star front and centre.

The Story: In the near future, space exploration has advanced considerably, with humanity travelling to the outer reaches of our solar system. Extensive colonies and bases have been established on the moon and on Mars. Major Roy McBride (Brad Pitt) is the son of decorated astronaut Clifford McBride (Tommy Lee Jones), who vanished years ago on a mission to Neptune. Space Command has received indications that against all odds, Clifford might still be alive. The experiments that were begun on the mission that Clifford led now have a ripple effect in the form of crippling power surges, endangering life on earth. Roy resolves to track his father down and solve a mystery that has haunted him for decades.

The Good: We don’t get many big-budget sci-fi films that are very serious, in part because spectacle sells. There is a scale of sci-fi “soft” to “hard”, with Guardians of the Galaxy on the “soft” end and something like The Martian towards the “harder” end. Director Gray takes a very serious approach, and one can tell that a lot of research has gone into envisioning what the future of space travel might look like. Some of the themes from The Lost City of Z, especially those of singular obsession, delusion and a desperation for a greater purpose, carry over into this film. This is a good showcase for Pitt too, who plays a heroic character burdened by sorrow and on the brink of collapse, trundling towards his goal, however futile it might be. There is little room for supporting characters, but Pitt ably carries this.

The Not-So-Good: Unfortunately, Ad Astra is caught between trying to be extremely self-serious and providing the action and spectacle audiences expect. As such, the action sequences feel disjointed from the rest of the movie and do not serve the plot. We get lots of contemplative voiceover from Pitt’s character, much of it bordering on pretentious. The film’s emotional core, the father-son story, is also hard to engage with and be moved by. As is typical for these films, the protagonist’s wife does a lot of waiting around back home and not much else. Liv Tyler plays an astronaut’s significant other again, 21 years after Armageddon, and has even less to do here than she did in the Michael Bay extravaganza. Also, while Donald Sutherland and Tommy Lee Jones are both in this film, they do not meet, denying us a Space Cowboys semi-reunion (but this is more for this reviewer’s amusement than an actual point against the movie).

It’s Lonely Out in Space: Ad Astra conveys the solitude and beautiful desolation of drifting through the cosmos, wondering about one’s place in the universe. Cinematographer Hoyte van Hoytema, who lensed Interstellar and Dunkirk for Christopher Nolan and Spectre for Sam Mendes, makes this look grand and expansive. It’s can be a bit navel gaze-y, but we saw this in IMAX and the breath-taking outer space vistas do make watching this on a huge screen somewhat worthwhile.

Space Oddities: Two sequences seem to stick out from this otherwise sombre affair: a chase on moon buggies that pit(t)s our heroes against a band of space pirates, and an unexpected attack by bloodthirsty baboons that have gone feral after being left alone in a space station. While these two sequences provide superficial excitement, they occur relatively early in the film, such that the bulk of the latter half of the movie consists of Pitt staring into the middle distance as we occasionally cut to the exterior of the spaceship floating past Saturn’s rings.

Recommended? If you know that you’re going to get something that is a bit too self-serious for its own good and not nearly as deep as it wants to be, then yes. Ad Astra may not necessarily find a big audience in theatres, but there are moviegoers who hunger for science fiction that’s more “search for our place in the universe” and less “lasers and giant spiders”.

Summary: Ad Astra is a rare movie in that it’s a star vehicle in an age when star vehicles are less common than big franchise movies, and in that it’s a serious science fiction movie with a big budget. However, Pitt’s central performance and the film’s visual splendour cannot compensate for its coldness as it trips over itself trying to be as deep and contemplative as possible.