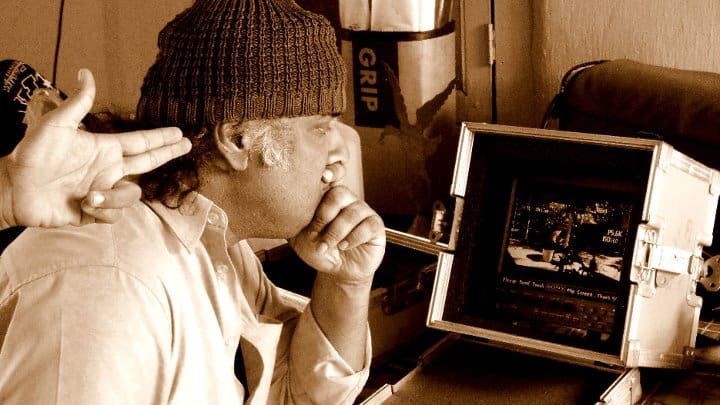 Rajagopal has been active in the Singapore film industry since 1995. He was awarded the Special Jury Prize at the Singapore International Film Festival (SGIFF) for I Can’t Sleep Tonight (1995), The Glare (1996) and Absence (1997). In 2015, Rajagopal contributed to the anthology film 7 Letters, writing and directing the segment The Flame. In 2016, A Yellow Bird competed in the Best Asian Feature Film category at SGIFF’s Silver Screen Awards. It lost to the Nepalese drama White Sun.

A Yellow Bird centres on Siva (Sivakumar Palakrishnan), a recently-released ex-convict who tries to eke out a living as doors are repeatedly closed in his face. He soon forms a kinship with someone else on the fringes of Singaporean society, a Chinese prostitute named Chen Chen (Huang Lu). The film also stars legendary Indian actress Seema Biswas as Siva’s mother. A Yellow Bird paints a harsh, uncompromising portrait of Singapore, far from the gleaming skyscrapers that dominate tourism board commercials. In the film, Rajagopal confronts themes of racial discrimination and societal attitudes towards ex-offenders.

Speaking exclusively to F***, Rajagopal shared about his challenges in making the film, transitioning from short films to a feature, directing an actress of Biswas’ stature and his hopes for the future of Singapore films.

F***: What were the challenges you faced in making your first feature film compared to the short films you’ve done in the past?

RAJAGOPAL: My short films were more improvised, self-made. They were small films with no script, made by a small crew consisting of good friends. This was 20 years ago. With A Yellow Bird, it was very different. I applied for national funding and had to produce a script. Then it went to several talent markets and hence we had to develop drafts and it was a long process of rewriting and rewriting. I think most independent films now have to go through this process.

What was the casting process like, and how did you come to cast Sivakumar Palakrishnan? As a documentary producer and director, did he contribute ideas while you were shooting?

​I know Siva as an actor for a long time. I have worked with him on television and short films. He is a friend and is very open to challenges. He is someone I trust and he has mental stamina to mould himself into a character. In our process, we had very little conversation. He was not playing a character that had to be intellectualised. He was an instinctive and impulsive character and so a lot of the story was not told or explained to him. I wanted him to experience the film as we were filming. I had to ask him to remain quiet and not converse with many people even during shooting, he spent some time getting into the space of the character, roaming the streets and keeping to himself.

How was working with Seema Biswas? Did she share stories from her storied career on the set?

I knew Seema through her films. I was always in awe of her performances, for example in Bandit Queen and Water. When I first met her, it was a humbling experience because she was very modest, she did not have any airs of being an experienced actor at all. She was very down to earth and we spoke a lot about her character when she first arrived. She wanted to observe. She was not from Singapore but she was playing a Singaporean woman, so she went to the streets in costumes and she was really trying to get into the skin of this person, to know the soul of this character. This is the reason why she is such a good actor. She did share the difficult scenes where she had to be very violently abused in Bandit Queen, and Shekhar Kapur made all the men in the scene be very abusive towards her so that she could get into the emotion and power of the scene. She also shared personal stories about Deepa Metha, a good friend, and how they have worked together many times.

In preparing the film, did you meet with ex-convicts and social workers and if so, what did you learn from speaking with them?

I consulted friends who were working in the prisons and social workers who have counselled convicts before. I took a lot of advice from them to make sure that the details depicted in the film were accurate, for example, what kind of rehabilitation was offered and what were the different kinds of cases they had to handle​.

In portraying the lives of sex workers, were there any clichés or misconceptions you consciously tried to avoid?

It may be a cliché, but a lot of sex workers entered the trade for money. Most of them had this central reason. They came from extreme conditions in their home country and most see this as an easy way to make money, albeit illegally. In the film, the character Chen Chen is a kindred spirit to the protagonist Siva because they both have the same motivation of protecting and providing for their children. This is why they had a connection.

The theme of racial discrimination is touched on in the film, but it’s not the sole issue that the film is about. How did you approach this subject and what did you set out to convey in this film?

I think it is definitely not the sole theme but racial discrimination does exist in Singapore and this tension was something I wanted to recreate on a subconscious level. The discrimination is not overt, it is simmering under the surface which makes it more dangerous. I was more interested to explore the character’s feeling of being an outsider in your own country especially in a multi-racial place like Singapore and how the position of outsider is threatened further by this growing racial tension.​

The location of the mangrove swamp where the makeshift brothel is set up is quite striking, and it is the setting for some unexpected moments of serenity. Where did you shoot those scenes, and what logistical challenges were there on location?

The scenes were shot in Tampines. It is a former quarry now flooded with rain water, it is almost a reservoir. It is surrounded by construction sites. Very secluded. It was a very crucial moment in the script when our art team found this site. Initially, the scenes were supposed to be set in a dormitory where all the characters lived together and we made this​ change when we found this beautiful location. The image of Chen Chen in the woods living in a tent and Siva bringing food to feed her reminded me of a bird nesting her young. Also, the element of water and land in coexistence. One is defined and one is not. I thought that all these metaphors of the forest were very important for the film.

What was the experience at the Cannes Film Festival like?

The film was first selected in Cannes as a project at Cinéfondation L’Atelier in 2014. It was a great honour for the project to be selected at such a prestigious market and there I met many future collaborators like my French co-producer and sound designer who are now close friends. ​The co-production exchange really benefitted my process and when the film was selected in competition at Critics Week, it felt like it came a full circle. To have my cast and crew on stage presenting the film with me was very special.

Many audiences might be confused or dissatisfied with the ending. Without giving too much away, what did you set out to achieve by concluding the film in this manner?

It is certainly not a classical ending where everything is resolved. But I would not change the ending because it’s not that kind of film. I think Siva is a very intuitive character and his final actions in the film relate to his urgent response to his entire journey. This journey is a continuous one and there is a cyclic nature of the film’s ending that mirrors its beginning.

What are the ways in which you feel the Singapore Film Commission and the Singapore filmmaking society can help aspiring local filmmakers?

I think there are so many talented filmmakers now. More filmmakers are getting noticed around the world. Independent filmmaking is very much alive in Singapore and I can imagine that national and independent organisations should provide more support in financing, growing the audience, talent development and creating an industry that invites more creatives to work in all types of cinema.​

A Yellow Bird opens in cinemas on December 8 2016, and is reviewed here.