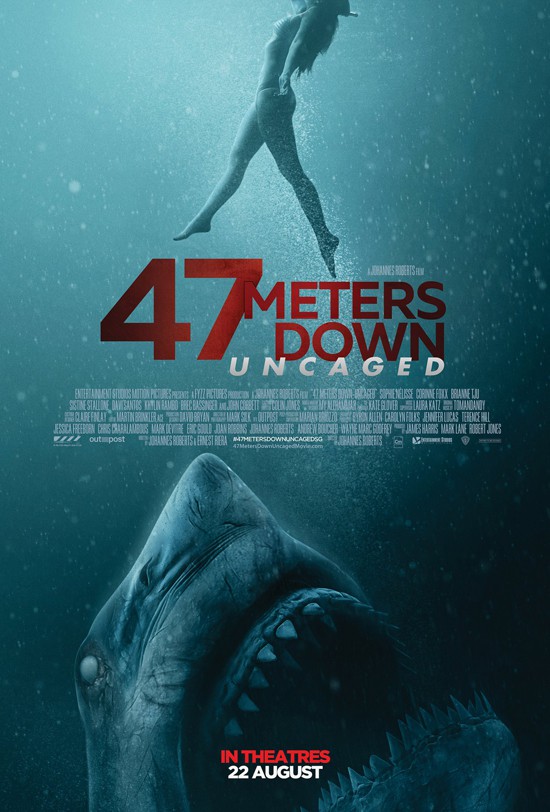 The Low-Down: After 47 Meters Down’s huge box office success, horror director Johannes Roberts returns with more than twice the budget with an indirect sequel with a totally new cast but the same monster. 47 Meters Down: Uncaged stars two high-profile teenage actresses — Jamie Foxx’s daughter Corinne and Sylvester Stallone’s daughter Sistine — alongside two other young actresses, pitting them against the brutal great whites. Uncaged is equally horrifying and thrilling as its predecessor, even entertaining if you can forgive the same flaws, that is.

The Story: Four high school girls — Mia (Nélisse), her half-sister Sasha (Foxx), adventurous but cautious Alexa (Tju), and rash yet timid Nicole (Stallone) — decide to take a dive into the submerged caves Mia and Sasha’s dad found. Unsurprisingly, the quartet is trapped in the labyrinth, is at the risk of running out of oxygen, and chased down by a great white… or great whites. They have to navigate the underwater maze and escape before they’re eaten or they drown.

The Good: Roberts brings his horror expertise to Uncaged, making every moment where the great white is around nerve-racking. What he and his crew did well in the first 47 Meters Down, he did even better in this follow-up with the extra bucks. The scares got this reviewer pretty good, and the sharks look even more terrifying and real. Let’s also not forget the actresses’ performances, though one might argue that they’re mostly monotone from the point they’re chased by the sharks — freaking out in practically every frame.

The Not-So-Good: Cheap jump scares, unrealistic dialogue, paper-thin characters, and the list just goes on. Uncaged might be quite a technical masterpiece but the plot, characters, and creativity are all typical B-movie standard, a pity for the US$12 million budget Roberts and crew got to play with this time around. Even the so-called heroine’s journey is hardly on point and leaves Uncaged as just another Jaws wanna-be.

Watch Out For: The ending sequence. Some might argue it’s fantastic and others might find it outrageous and ridiculous. The action is pretty cool, though.

Recommended? Yes. This is no Jaws, neither is it The Meg (which is arguably a creative twist to the typical shark movie), but watch it for the thrill and scares. Uncaged is just 90 minutes, but the middle 60-70 minutes are pure horror and suspense.