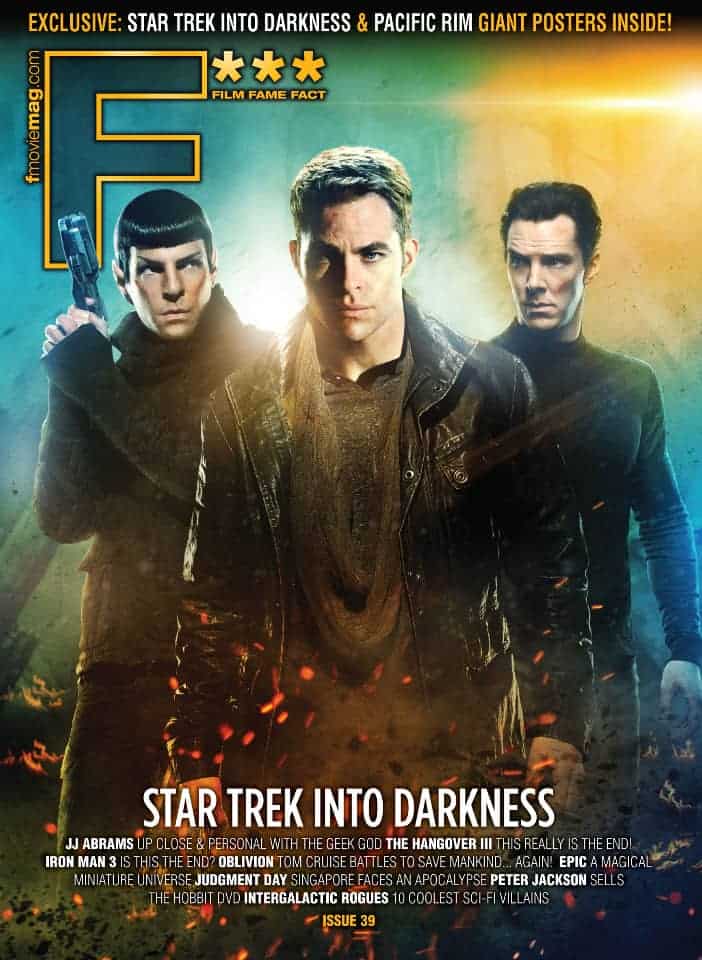 “Frick” – that’s what our magazine title became in comments and chats on numerous film blogs and fansites after we posted an early image of our April cover, which went viral online. All due to the wonders of modern text-censoring technology, but we’re glad pictures speak louder than words.

In case you’re wondering, F*** is pronounced as ‘F’, or whatever you feel like calling it. And we hope you’re as ‘frickingly’ excited by the cover of our April issue as we are – this world-exclusive image of Captain Kirk (Chris Pine), Spock (Zachary Quinto) and new antagonist John Harrison (Benedict Cumberbatch) has us even more excited for Star Trek Into Darkness, which hits Singapore shores on 16 May 2013.

As you can see from our cover, this issue is jam-packed – as always – with the latest and most exclusive movie news and reviews. First and foremost, director and geek god JJ Abrams tells F*** about making a movie that would please fans and neophytes alike.

We also snagged an exclusive interview with Todd Phillips, director of the world’s biggest R-rated comedy franchise. Phillips tells us about what the trilogy has meant to him and confirms that The Hangover III (sobering up in cinemas on 30 May 2013) really will be the final adventure for the Wolf Pack.

Still hungry for more? We spoke to director Joseph Kosinski about working with Tom Cruise on Oblivion, a post-apocalyptic sci-fi blockbuster that he’s been thinking about for eight years. We also chatted with director Shane Black about reuniting with Robert Downey Jr for Iron Man 3; and director Danny Boyle for Trance, a hypnotic thriller that’s taking the cinematic world by storm

This issue also shines a spotlight on a few upcoming local movies, all of which represent a departure from the norm in their own ways. Veteran television director Ong Kuo Sin gave us an exclusive first interview about his debut feature film Judgment Day, which brings the end of the world to the Lion City… and shows us Henry Thia as you’ve never seen him before. Anyone who loves Singapore folk music – or ‘xinyao’ – should also check out our interview with Chai Yee Wei, who’s bringing That Girl In Pinafore, a love story about our collective musical heritage, to the big screen in August 2013. We also talk to up-and-coming short film-maker Edwin Ho, whose final-year project was selected to participate in this year’s Cannes Film Festival.

(Now you know why we’ve been informally calling #39 the Director’s Issue around the office…! )

Enjoy, and see you at the movies!