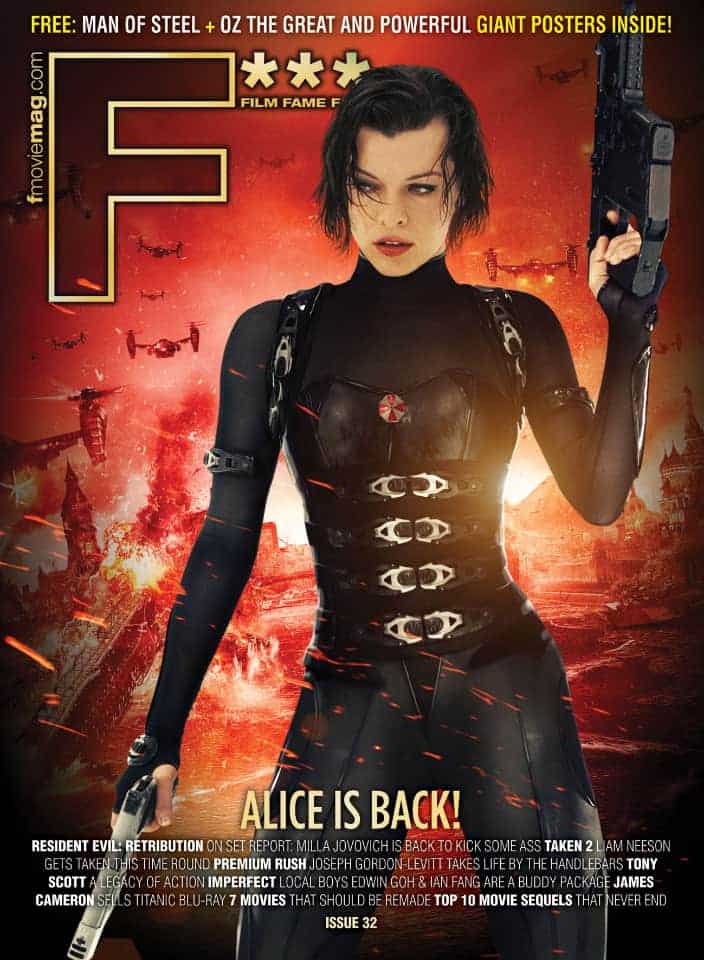 It’s funny how we are creatures of habit – we are wary of the unknown and find comfort in familiar stuff.

It is of no surprise then that the Resident Evil franchise, which is into its fifth film, is still ass-kicking and, well, evil. Perhaps Milla Jovovich is a damn good choice as the protagonist – can you imagine someone else playing Alice, or for that matter, Milla playing some other characters? Yeah, she wasn’t that fierce in the Three Musketeers, and the only other role we can remember her in was in her breakout film, 5th Element. Of course the highly popular video game from which Resident Evil is adapted plays a big part too. Well, it helps too that she is in a way married to the film, after all she’s married to the film’s director (Paul W. S. Anderson), for all of a decade. So playing Alice should be like a second skin now. Check out our on set report of Resident Evil: Retribution, where the icy actress was involved in a snow fight, literally. Page 34.

Talking about long-running sequels, we bring you some film franchises that never seem to run out of ideas in this month’s Top 10 Movie Sequels: Never Ending Stories. We just love how we play with words to get this quite apt title. Page 44.

Of course, in the continuing trend of sequels and reboots, we dig out some potentially good films that didn’t quite pack a punch the first time round and could have benefitted with the make-over of a remake. Let’s hope some producers may chance upon the write-up, and fulfil our wish list of 7 Movies That Should Be Remade, on page 68.

Obviously in the grand scheme of all things financially viable, the movie mafias are churning out more sequels and remakes than ever before. There’s Liam Neeson’s Taken 2, where someone gets taken again, on page 50; and Dredd, a remake of 1995’s Judge Dredd; and tonnes of many other announcements and shreds of evidence that more are coming our way, inside… Such extortionists the studios are becoming!

All hopes are not gone, there’s Premium Rush, an original story that’s on the schedule this month, page 56. “Oh, it’s David Koepp who directed it, I know him. I’m familiar with his works so the film should be okay,” says our inner voice. Case closed.

Case reopened: Would you have watched Chronicle, which had an unknown cast and director, if not for the rave reviews your regular reviewer had to watch to rave about? “When’s the sequel coming?”,  our inner voice asks again.

We are all trapped…