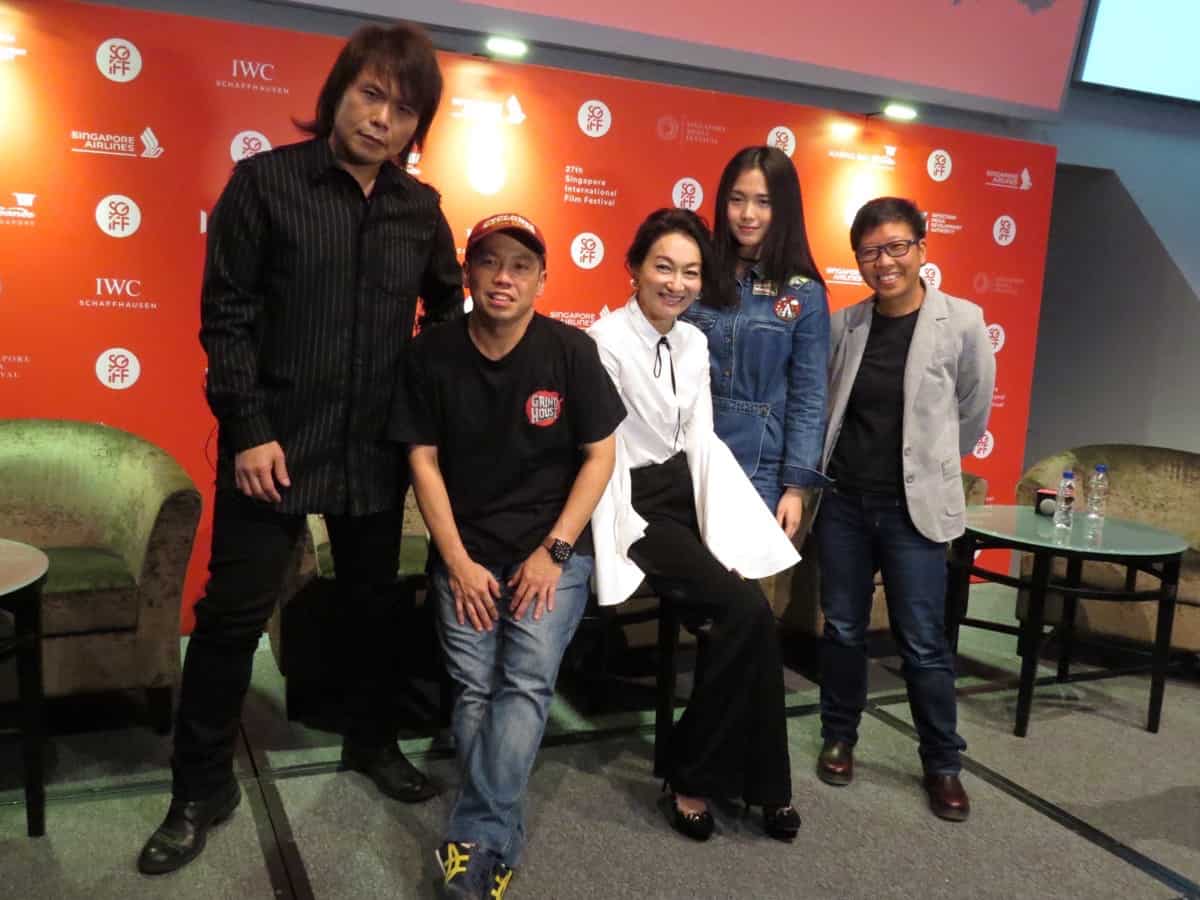 Much to the glee of the press and participants, there was certainly no lack of laughter during the engaging exchange. Sharing that both he and Wai were keen to work together again after their great success with the 2009 film At the End of Daybreak, director Ho professed that he specially wrote this screenplay with Wai in mind as his inspiration and sole choice as the female protagonist. In response, Wai jokingly remarked that she owed such a debt of gratitude to Ho for revitalizing her acting career with At the End of Daybreak that she would even be willing to go as far as acting in a Category III flick for him. She added humorously however that this was provided audiences were prepared to pay to watch her in a state of undress at her age.

Wai was also tickled pink when being asked about the secret to staying glamorously gorgeous despite her punishing regime as an action heroine star. Jestingly laughing it off at first saying that she could well be the immortal Tree Demon “Lao Lao” from A Chinese Ghost Story, she then went on to credit her healthy diet and lifestyle as keys to her success in maintaining her fitness and wellness.

Turning out to be a surprise was also Wu Bai, who despite his grungy rocker looks was actually quite the jokester amongst the group. Everyone burst into laughter when he first teased the session moderator when she offered to translate a question for him, only to have him funnily deadpanned that he actually perfectly understood what was being asked in English.

Wu then further kidded that he first accepted the role as director Ho told him that it would be an easy job since he would be knocked out at the start of the movie and all the action scenes would pretty much be covered by Wai. However, he bemoaned hilariously that two years later when he read the final script, he found out that Ho had rewritten the role as Wai’s gynaecologist husband, such that it was meatier. So, he ended up with quite a fair bit of dialogue and even had to do a number of fight scenes where he was pretty much a punching bag throughout the filming process. But on a more serious note, Wu admitted that having been impressed by Ho’s past work, he was more than willing to accept this challenging film role to work with Ho.

As for newcomer Siow, it was a rather unexpected surprise to discover from Ho’s own admission, that this talented young actress was actually not his original choice to play Wai’s daughter Little K. Relating some amusing anecdotes about her casting process, Ho revealed how she managed to change his mind by standing out from the crowd as the only teenage girl amongst all those who auditioned daring enough to challenge him randomly to a race. Ho also shared that it might also be interesting to note that fatedly Siow turned up for auditions coincidentally wearing the same Rolling Stones t-shirt that he had on that day.

Jokes aside, executive producer Tan also shared how special Mrs K was to her and Ho, as it allowed both of them to come full circle. Reason being that Tan had previously produced one of Ho’s earlier claim-to-fame arthouse films Century and now after ten years, she is yet again in the producer’s chair, collaborating with him on his very first mainstream action film.

Following the insightful In Conversation session, the cast and crew of Mrs K reconvened at the red carpet at Capitol Theatre for the Special Presentation local premiere of the film. Joining them were fellow cast member and award winning Malaysian actor, Faizal Hussein and his wife. MediaCorp Dukes Zhang Zhen Huan and Shane Pow, Project Superstar 3 winner Alfred Sim and his wife singer-songwriter Tay Kewei, as well as other local celebrities including Aileen Tan and Georgina Chang also graced the red carpet.

For those who are keen to explore and discuss more about some of the most highly anticipated Special Presentation films at the festival this year, two more In Conversation sessions are lined up as follows: