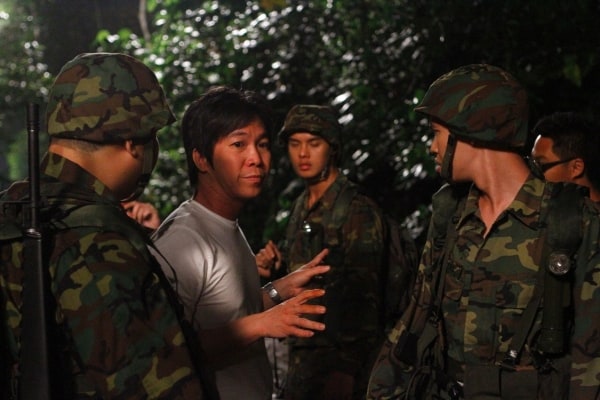 The second time happened in the day. I was sitting at my desk working on the script when suddenly, my toilet door slammed itself shut and locked from inside. I didn`t know where I put the toilet keys as we never had to use the keys before. Amazingly, about an hour later, the exact same thing happened to my master bedroom toilet. It just slammed itself shut and locked from the inside. And it was not even a windy day! And I had to drive out to the nearby coffee shop to use the toilet because both my toilets were locked!

With regards to your motley crew of characters, were they based on real life individuals that you met in army?
Yes, absolutely. All of them were in fact based on people I have met either during NS or reservist [days].

Which of the characters do you think you were closest to, with regards to your NS experience?
I can`t say I am closest to any of the characters but I could identify with Dragon and his gang bullying the weaker recruits. I remember during my NS [days] there was a physically weak recruit who actually lost his bayonet during training. We had to search the camp for his bayonet and when we couldn`t find it, the entire platoon was made to stay in camp for the weekend. I remember a group of us were so frustrated that we just scolded him non-stop. I felt pretty guilty afterwards cause I saw him crying in the toilet.

Given Mark Lee`s reputation as a comedy actor, what was the rationale behind your decision of casting him in the part of Sergeant Quah? Did you want that aspect of comic relief in the movie?
I have always been a huge admirer of Mark. He always brings something special to a role and I felt this role was perfect for him. Just like the platoon Sergeant I had during basic military training, he was both fierce and funny at the same time. And Mark played it perfectly.

What were the most difficult aspects of creating 23:59?
Other than the fact that the script took almost ten years to develop! Seriously, it went through many different versions through the years.
During the shoot, we spent a lot of time in the forests. We were battling rain, leeches and mosquitoes. There were scenes with children, and even a wild boar! In a way, it was one of the most demanding shoots I ever had. But yet, it was one of the happiest shoots I ever did cause the entire team was so together and united.

What was your favourite part of creating the movie?
I really enjoyed the shoot, actually. The actors and crew were extremely professional and fun and it was really a joy to be on set every day despite the tough conditions!

Was the movie shot in one single army camp or did you use several locations? Where were they?
Yes it was all done in a single army camp. It was in a real army camp in Malaysia. Quite an isolated location called Dengkil. And on the very first day of the shoot, one of the camp officers told us not to be too alarmed if we see any strange things in the camp! What a way to welcome us!

Who`s your favourite director in the horror/suspense genre? What do you think his influence was on the creation of this movie?
Guillermo Del Toro. He made classics such as Orphanage, Devil`s Backbone and Pan`s Labyrinth. He makes horror films with a heart and there are often some social messages in the story that makes you think. This is what I hope to do, create horror films that not only scares, but with a strong emotional core and hopefully make people think as well.

What`s the favourite army ghost story that you`ve heard thus far?
I would have to say it`s the Tekong Third Door Story which 23:59 is loosely based on. It`s about a recruit who got lost during a road march and when they found him after a massive manhunt, he was squatting next to a tree with his stomach ruptured and his internal organs laid out in a neat row beside him. Subsequently, the bunk he was staying in was haunted as many of the soldiers claimed to see his spirit at night. I always thought this was an urban legend because I heard about this story even before I went to the army. But when I did some research about this, I found the actual newspaper article about this incident in the Straits Times in 1983. The cause of death of the recruit is still unknown till this day.

So did anything supernatural happen while you were in the process of making the movie?
There was one particular toilet in the army camp which was pretty strange. Three of the crew went in one after another and all claimed to have heard a strange voice calling out to them. Then one of the Malay crew who could actually see â€˜things`, went into the toilet but he dashed out within five seconds. When we asked him about it, he simply refused to talk about it and told us not to go into the toilet again!