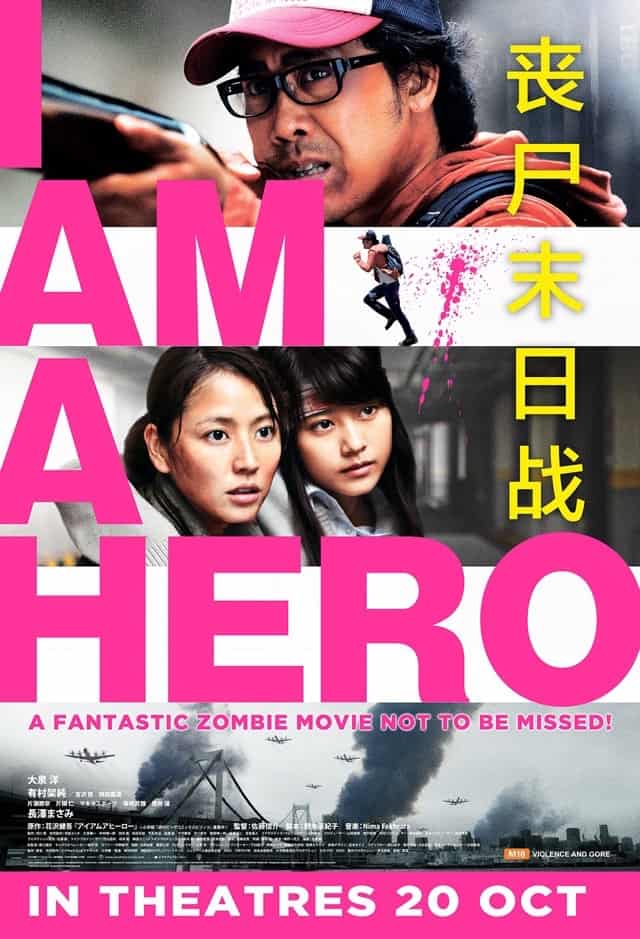 I Am A Hero is actually, believe it or not, the Japanese film industry’s first foray into the ‘living dead’ horror film genre. Following the resurgence in popularity of undead-themed shows, from immensely successful U.S. TV series The Walking Dead through to the recent cinematic successes of South Korea’s Train to Busan and India’s Miruthan, Japanese director Shinsuke Sato brings the quirky characters and bizarre storyline from Kengo Hanazawa’s manga of the same title to vivid and horrifying life on the silver screen.

The story begins with 35-year-old protagonist Hideo Suzuki (Oizumi), whose first name may literally translate as ‘hero’ but who is, in reality, quite the unaccomplished loser with low self-esteem. Despite having won a Best Newcomer award a decade ago, Hideo has never quite lived up to his potential as a manga artist. Kicked out of their home by his live-in girlfriend, Hideo spends the night at his workplace… only to wake up the next day to discover that a mysterious virus has not only taken hold of his girlfriend, but spread throughout Japan as well, inciting massive fear and hysteria throughout the nation.

Armed with a sporting shotgun that he has never fired, Hideo flees for dear life from the rapidly multiplying masses of infected victims, known as ‘ZQN’ (pronounced ‘zokyun’) to the authorities. Endeavouring to escape to safety alongside Hideo are high-school student Hiromi Hayakari (Arimura) and nurse Yabu Oda (Nagasawa).

With plenty of zombie-themed films and TV shows proliferating across the world, one would imagine that it might be rather challenging for Sato to find new ways to scare audiences with his take on zombies in this film. Thankfully, he rises to the occasion. Without giving too much away, it’s safe to say that the ZQNs takes zombies to a whole new level of terror – combining the worst of zombies and Japanese ghouls, with an added touch of sadistic gore.

To make things even deadlier for the film protagonists, these ZQNs can only be annihilated after their heads are entirely destroyed beyond function. So much for hoping that a stab to the brain would do the trick, a la The Walking Dead. Surviving this Japanese apocalypse is definitely no ‘walk’ in the park, pun fully intended.

Kudos also to whoever made the clever decision to hold back and not reveal too much about these monstrous ZQNs in the film’s trailers and promotional materials. It keeps audiences in the dark about these creepy creatures and allows them to experience their very first ‘encounter’ with the ZQNs only when they watch the actual film. In fact, keeping the film’s storyline under tight wraps was such a top priority that, as fans of the original manga series may have already figured out, the movie poster has been slightly tweaked to avoid spoiling a significant plot development for one of the protagonists.

Another well-handled aspect of this film is the humour. Rest assured, horror buffs – there’s no need to run for the hills. More quirky than outright spoofy – more along the lines of Ally McBeal’s hilarious hallucinations than Shaun Of The Dead – just the right touch of comedy was injected throughout the film at the right moments to provide audiences with some respite from the horror rampage.

Interestingly, I Am A Hero deviates from the norm of most zombie-infested films, in which the protagonists’ focus tends to be on escaping the undead mob. Here, the protagonists bravely choose, against all odds, fight over flight. As such, we get to witness Hideo evolve from zero to hero, overcoming his scaredy-cat nature to become the brave badass who comes to the rescue of Hiromi and Yabu in their most dire time of need. If you think Uma Thurman is impressive as The Bride in Kill Bill, wait till you see Hideo in his moment of heroism in I Am A Hero’s show-stopping finale sequence – it is, in a word, awe-inspiring.

It’s not every day that a zombie horror film can be terrifying, funny, exciting and yet heartening, all at once, but I Am A Hero accomplishes all that and more. Near the beginning of the film, a character comments that Japan just can’t surpass its foreign competitors when it comes to movies. We beg to differ. At the very least, I Am A Hero has far outdone its competition – not bad at all, for the new kid on the zombie block.

Summary: For fans of the zombie genre, I Am A Hero is unmissable. With its chilling new spin on zombies, pulse-racing action, quirky humour and refreshing take on the traditional hero’s journey, Sato’s film exceeds expectations and is most mind-blowingly (pun intended) gratifying.