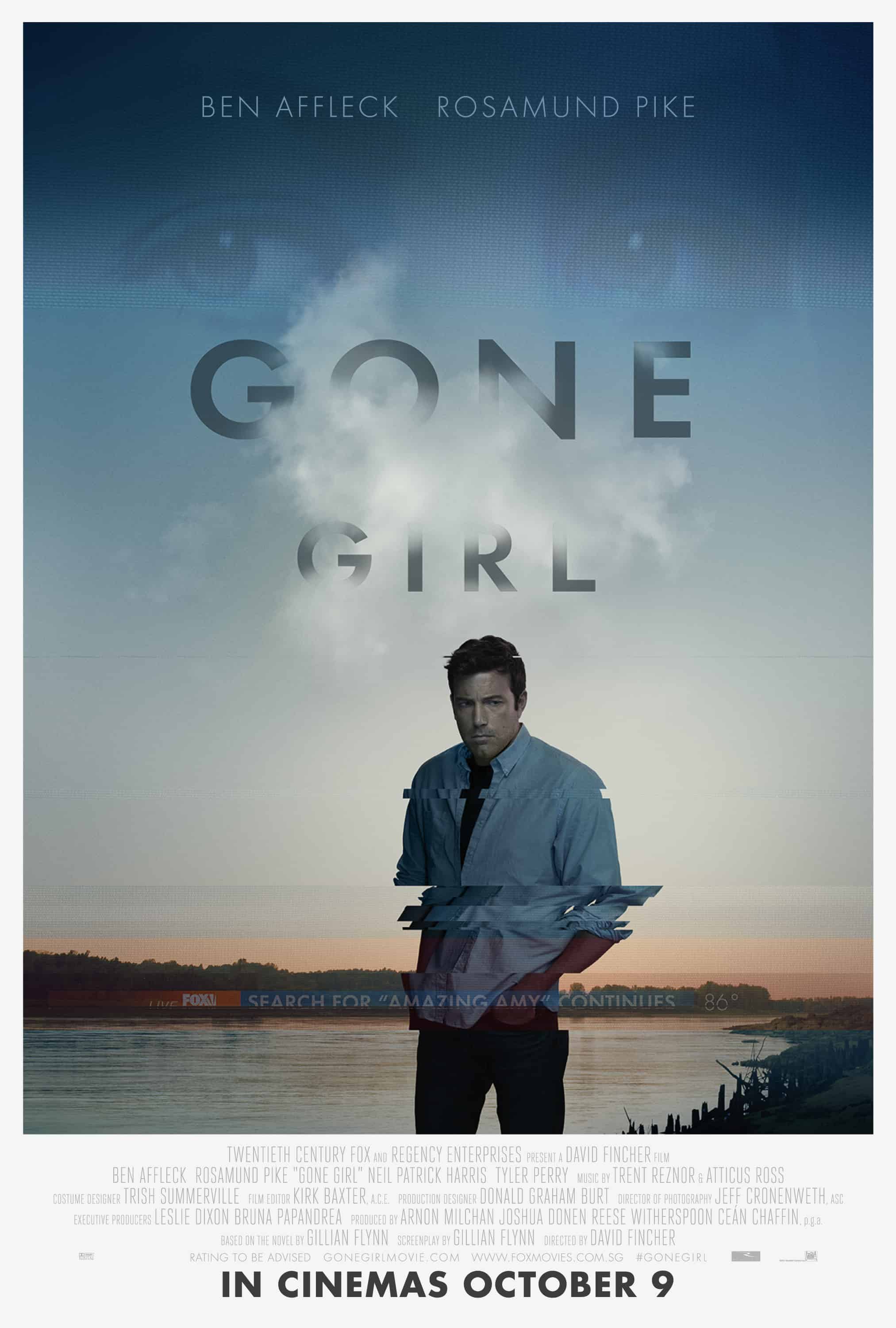 At various points in the 90s, audiences have heard a frustrated Harrison Ford emphatically declare “I did not kill my wife!”. Now, we get to hear Ben Affleck say it. Affleck plays Nick Dunne, an unhappily-married former journalist who runs a bar with his twin sister Margo (Coon). It is the fifth anniversary of Nick’s marriage to Amy (Pike), the basis for her author parents’ popular children’s book character “Amazing Amy”. That morning, Amy vanishes. A media frenzy envelopes Nick’s hometown of North Carthage, Missouri, with cable TV host Ellen Abbott (Pyle) insinuating on her show that Nick is guilty. Leading the investigation, Detective Rhonda Boney (Dickens) begins to doubt Nick’s innocence as well. Of course, not all is as it seems, with Amy’s ex-boyfriend Desi (Harris) drawn into the fray. Nick has to rely on superstar lawyer Tanner Bolt (Perry) as more and more of the public turn against him, demanding to know exactly what happened to “Amazing Amy”. 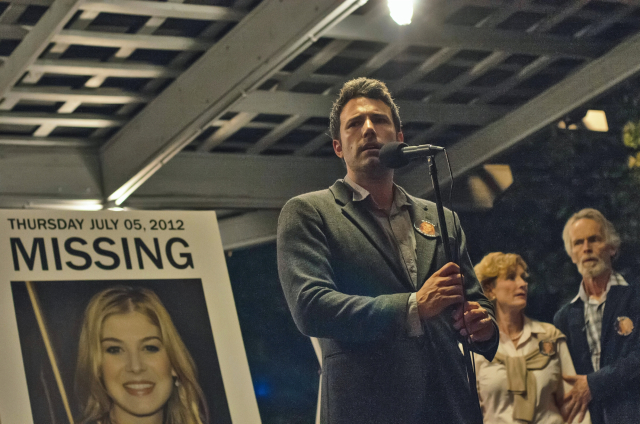 Adapted from the best-selling Gillian Flynn novel, the most superficial of glances might lead one to think Gone Girl is just another whodunit. Wife disappears, husband is the prime suspect, there’s probably a twist or two. Gone Girl is so much more than that, ending up as a wickedly subversive deconstruction of your average Lifetime Channel movie of the week while skewering mass-media sensationalism. Working from a screenplay written by Flynn herself, director David Fincher is still at the top of his game, his signature technical acumen and incredible instincts as a filmmaker on full display here. 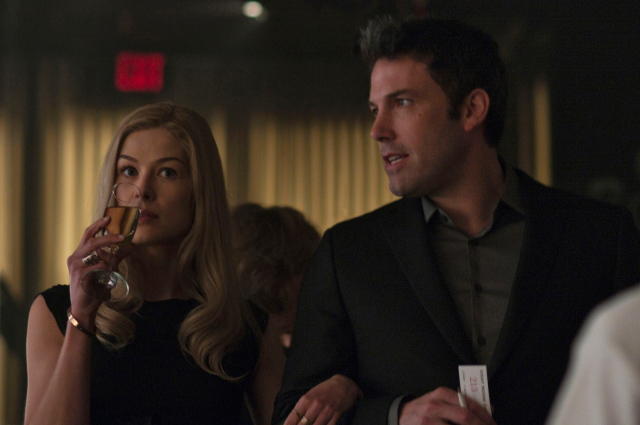 The tonal balance Flynn has achieved in the story is stunning – one wouldn’t expect a murder mystery thriller to be this funny. The humour is dry and scathing and never undercuts the intensity and the suspense, both of which Gone Girl has in spades. The first half of the story alternates between the unfolding events surrounding Amy’s disappearance and flashbacks detailing Nick and Amy’s relationship, told in the form of Amy’s journal entries. Some screenwriting guru somewhere once said “never use voiceovers” – Pike’s voiceovers framing said journal entries are pitch-perfect in how they’re written and delivered. 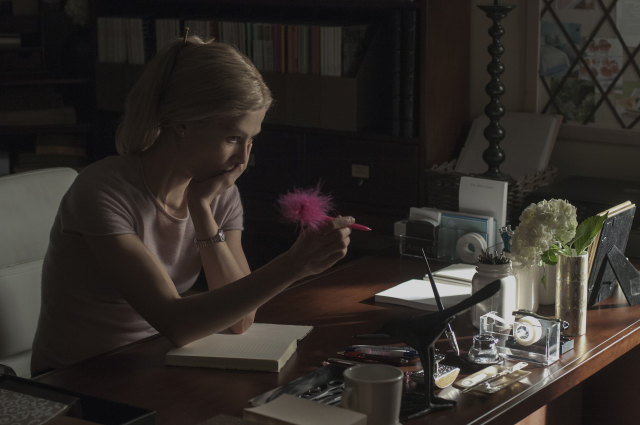 When the film was in production, much was made about how the book’s ending had been altered. That infamous ending has remained unchanged. If you haven’t read the book yet, go into this movie blind, then pick up the book. The gut-punch developments in the story are, to borrow a cliché, a rollercoaster ride. There’s a difference between a film making the audience feel like they’ve gone on a crazy ride and a film making an audience feel like they’ve been played like chumps – there will be viewers who think Gone Girl falls into the latter category but this reviewer was thoroughly entertained. This is the kind of movie you want to see twice in theatres, the second time to pay attention to how your fellow moviegoers react. There will be gasps; there will be howling. This is the rare thriller where the twists not only hold up upon inspection in hindsight, they actually seem even stronger than they did the first time round, events turning operatic and heightened without becoming laughable. 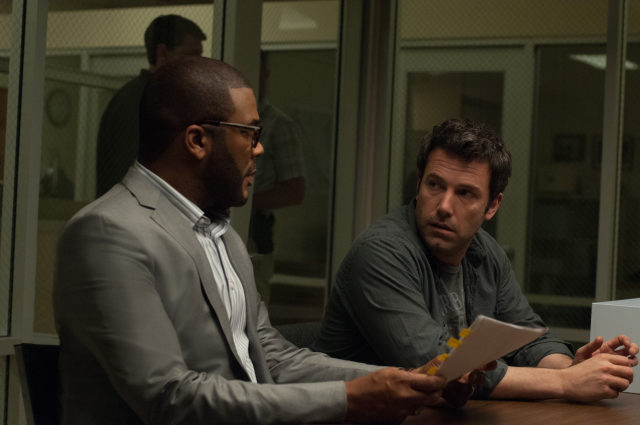 Affleck was nominated for “Worst Actor of the Decade” at the Razzies. He’s not the worst actor of the decade – or at least, he isn’t anymore. His Nick Dunne is in over his head; he’s not brilliant but he’s not a total idiot either. The audience has to root for Nick at some points and doubt him at others; Affleck plays those different colours well enough. He also gamely takes jokes about his chin. Pike does completely steal the show from him though – in your run-of-the-mill whodunit, the “missing/dead?” wife wouldn’t be playing too big of an active role in the story – but this is not your run-of-the-mill whodunit. The contrast between the wistfully romantic flashbacks (there’s a scene in which Nick and Amy kiss in a “sugar storm” outside a bakery) and the suspenseful, dramatic investigation is effectively jarring as performed by Pike. Amy is not just another “missing white woman”; Pike creating a memorable character in a genre where “the wife” is often, well, “the wife”. 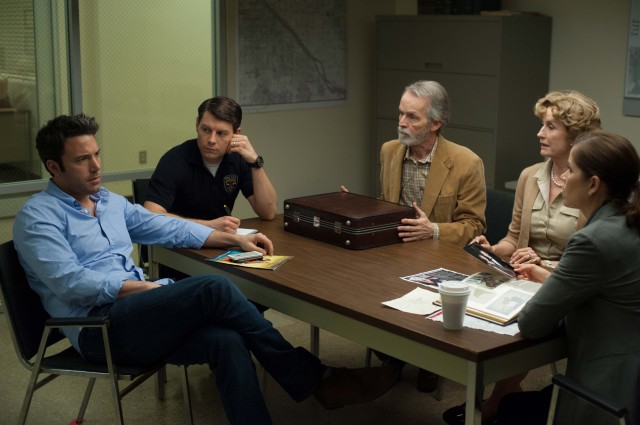 Affleck and Pike are backed by an excellent supporting cast. The familial bond between Nick and his twin sister Margo is believable and moving thanks to Coon’s strong turn as the pillar in Nick’s life following his wife’s disappearance. Dickens plays the “no-nonsense tough cop” without relying on the stereotypes associated with those character types. Pyle’s sneering daytime TV show host, hurling allegations which the public swallows wholesale, provides biting comic relief. Harris and Perry actually don’t play that big a part in the proceedings until around the halfway mark. It might be distracting to some, but the urge to go “hey Barney Stinson/Doogie Howser” or “hey Madea” does quickly die down. This reviewer was honestly worried about that, with Perry in particular, but Perry is sufficiently credible as the affable, astute Tanner Bolt. 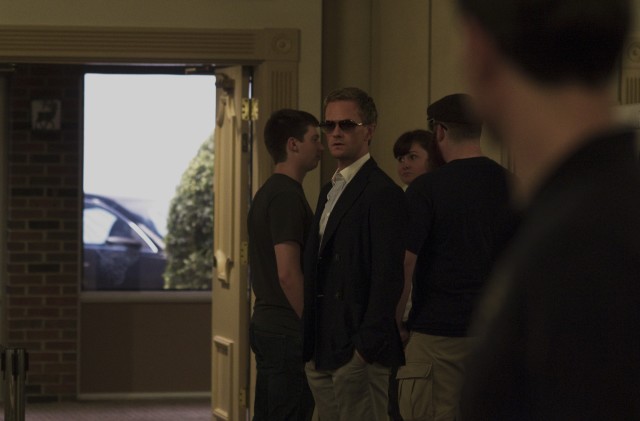 As with just about all of Fincher’s films, the atmospherics click right into place. Trent Reznor and Atticus Ross deliver an ominous score that rears its head at just the right moments and this marks yet another visually-arresting partnership between Fincher and his regular cinematographer Jeff Cronenweth. Editor Kirk Baxter also includes some interesting flourishes, such as a scene which cuts from Nick and Amy about to kiss in a flashback to Nick getting his cheek swabbed at the police station. The ending will probably be infuriating for many viewers, but we think it’s far from the cop-out it could’ve been. After all, some of the best stories have pretty “infuriating” endings. 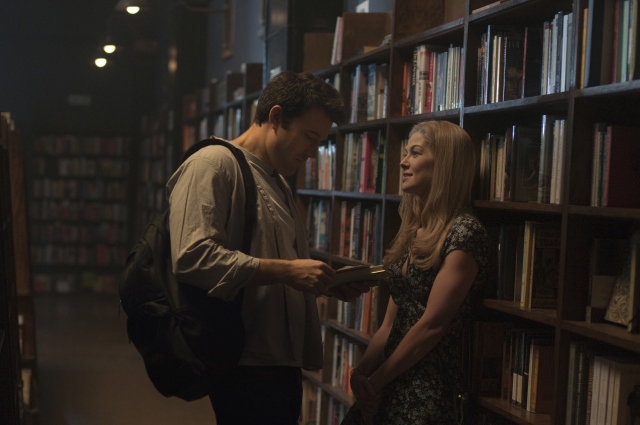 Summary: Gone Girl will pull you in, spin you around and leave you completely hypnotised. With Gillian Flynn’s razor-sharp screenplay and some terrific performances, Fincher has yet another winner on his hands.