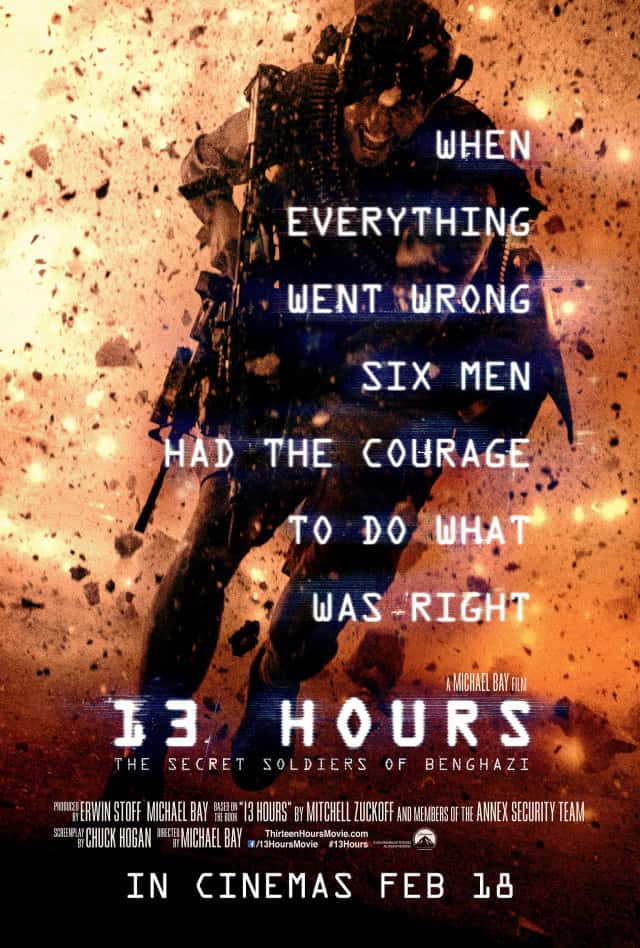 It is 2012, the year after Muammar Gaddafi was deposed and killed in the Libyan Civil War. Idealistic ambassador Chris Stevens (Letscher), who is stationed in the Libyan city of Tripoli, makes a visit to Benghazi. On the evening of September 11th, a group of Islamic militants stages an attack on the American diplomatic compound where the ambassador is staying and the CIA “Annex” building situated nearby. A team of six Global Response Staff (GRS) security contractors hired by the CIA undertakes a desperate defence of the grounds as all hell breaks loose. This team comprises Tyrone S. “Rone” Woods (Dale), Jack Silva (Krasinski), Mark “Oz” Geist (Martini), John “Tig” Tiegen (Fumusa), Kris “Tanto” Paronto (Schreiber) and Glen “Bub” Doherty (Stephens). These men, veterans of the Navy SEALS, Marine Force Recon and Army Special Forces, defy the orders of their Chief (Costabile) to stand down as they repel the scores of attackers in a last-ditch attempt.

A series of title cards begin the movie, the last one before the title itself declaring “this is a true story”. Not “based on” or “inspired by”, but a definitive “is”. Any time a film depicting an actual event is made, debates on its accuracy are bound to ensue. Given how relatively recent the Benghazi attacks were and the impact the incident still has on the American political landscape, what with this being an election year and all, the firestorm around 13 Hours is fiercer than usual, even if Hillary Clinton isn’t even mentioned in the film. 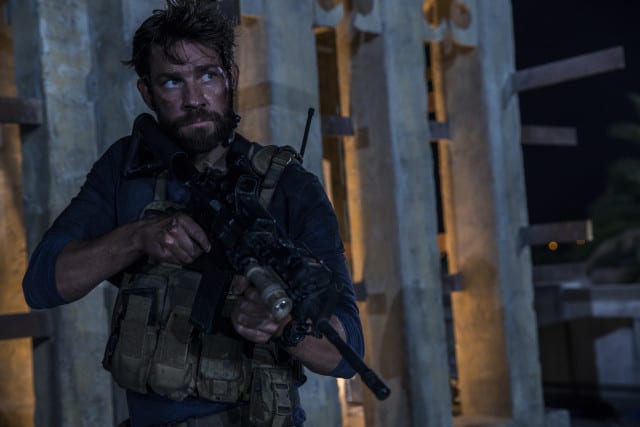 Furthermore, the man at the helm of the film is Michael Bay, who famously dismissed film critics’ opinions of him by saying “I make movies for teenage boys”. While there obviously aren’t any clanging robot testicles to be found in this film, it’s still abundantly clear that the director lacks the nuance and finesse to fashion a gripping, thought-provoking depiction of the Benghazi attack. Bay has proudly, gleefully put military hardware on display in many of his previous films, boasting that he was the first to film certain aircraft or types of weaponry for the big screen. Therefore, it seems less likely that he’s motivated by noble intentions and more likely that he’s motivated by a desire to play with big, loud, shiny toys.

Screenwriter Chuck Hogan adapted Mitchell Zuckhoff’s book 13 Hours for the screen. Zuckhoff, who wrote the book with the surviving members of the security team, stands by their version of events and has fired back at the CIA officials who claim the movie contains multiple major inaccuracies. A key plot point, that the team was ordered to stand down by the CIA station chief in Benghazi, has been denied by the CIA. Bay has claimed that the film has no political agenda, but the marketing campaign aimed squarely at conservative audiences says otherwise. Bay made an appearance on The O’Reilly Factor and trailers were scheduled to run during the live broadcast of Republican debates. 13 Hours is couched as a celebration of courageous unsung heroes and is dedicated to the memory of the two security contractors who died fighting the attackers. This comes off as disingenuous and while this reviewer certainly cannot vouch one way or the other, it’s hard to shake the sense that a true story has been squeezed into the mould of a generic action movie.

The film clocks in at 144 minutes, with the actual attack not happening until around the 45-minute mark. It stands to reason that all this time spent with the characters before the chaos ensues will help us get to know them better. Not quite. The men are shown having Skype conversations with their family back home and there’s a flashback set to a sappy piano score in which Jack’s wife pleads with him to quit his private military contractor job. We even get a burning family photo fluttering to the ground later on. Bay and Hogan resort to reductive shorthand: we’re supposed to cheer for the muscle-bound, gun-toting bearded dudes and jeer at the paunchy, bespectacled bureaucrat. The lesson here is that in the end, all the Yale and Harvard-educated intelligence agents in the world cannot compare to good old-fashioned action heroes blasting the bad guys to bits. Yee haw!

The most worthwhile element of the film is Krasinski’s performance. Somewhat following in the footsteps of Chris Pratt and Paul Rudd, Krasinski is an actor known primarily for comedic roles who has completely transformed himself into an action hero. The difference between Krasinski and those two is that Jack Silva isn’t a wise-cracking rogue and some serious acting chops are called upon in addition to the running and gunning. Whatever faint glimmers of sincerity the film possesses are courtesy of Krasinski. 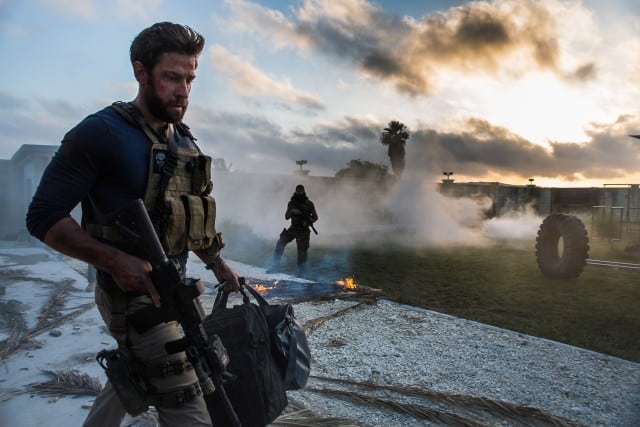 There is possibly a hint of self-awareness here: earlier on in the film when the team are relaxing, they’re watching Tropic Thunder, a satirical comedy about clueless Hollywood types making a war movie and getting caught in actual danger. Typically, action movies are escapist entertainment and yes, it is certainly possible to imbue an action movie with deeper meaning, but Bay has not accomplished that here. With Bay, it’s clear who the victor in the war between flash and substance always will be.

Summary: A subject as complicated as the Benghazi attacks needs a defter directorial touch and doesn’t need to be as stuffed with action movie clichés as 13 Hours is. There are attempts at deeper meaning, but viewers who will come away most satisfied are fans of vehicles exploding and flipping over.